Elon Musk said today that Tesla will accept dogecoin as payment for some of its merchandise, sending the ‘meme coin’ soaring by 33 percent in the space of two hours.

‘Tesla will make some merch buyable with Doge & see how it goes,’ Musk tweeted following a poll in which 78 percent of his followers said he should.

Dogecoin, originally created as a satirical joke currency, raced up to $0.21 after the tweet.

Musk’s tweets on the cryptocurrency, including the one where he called it the ‘people’s crypto’, have helped it surge by 5,859 percent over the past year. 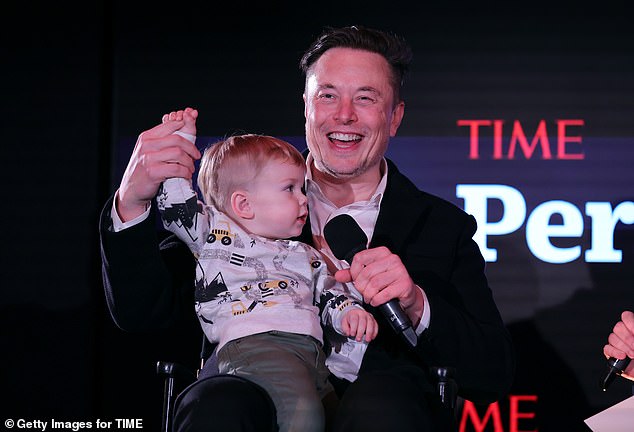 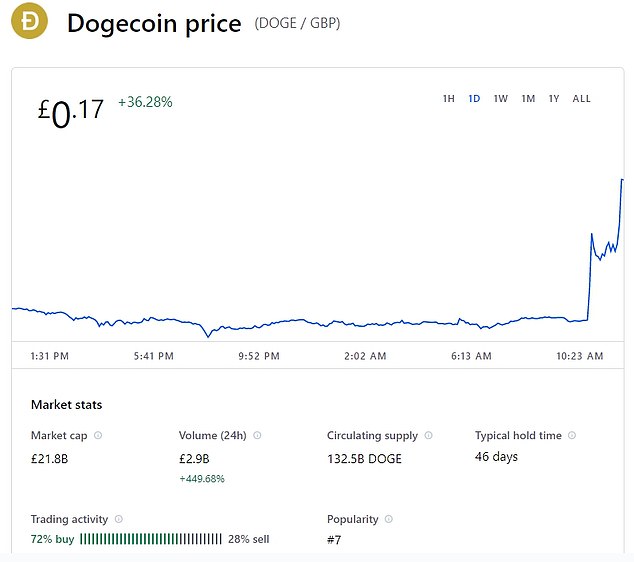 Musk did not specify what merchandise, which starts from $50 and goes as high as $1,900, could be bought with dogecoin.

Tesla sells apparel, ‘Giga Texas’ belt buckles and mini models of its vehicles as well as quirky limited-edition items such as the ‘Cyberwhistle’, which is modeled after its much-awaited Cybertruck.

It recently launched a quad bike ‘Cyberquad’ for kids, also modeled after the truck.

Musk, who has more than 66 million Twitter followers, has helped cryptocurrency boom during the pandemic.

He has even caused the price of a small cap coin called ‘shiba inu’ to jump sporadically by posting pictures of his shiba inu puppy on the social network.

The electric car manufacturer bought $1.5 billion bitcoin in January, and then in March, announced it would start accepting the currency for car purchases.

But in May, Musk backed off the idea as he branded bitcoin’s energy consumption ‘insane’ and Tesla said it would no longer accept purchases using the currency.

Bitcoin and other cryptocurrencies are ‘mined’ using intensive computing power which leaves a large carbon footprint.

Musk has since talked more about dogecoin and said he was working with developers to improve its efficiency.

The Tesla boss claims doge is better for transactions, most recently in an interview with Time magazine, which named him ‘Person of the Year’ for 2021 on Monday.

‘Bitcoin is not a good substitute for transactional currency,’ he said.

Musk had asked users in May if they wanted Tesla to accept dogecoin in a Twitter poll.

But he also sparked controversy by referring to dogecoin as a ‘hustle’ during an appearance as a guest host on SNL that same month.

Musk, who has over 66 million followers on Twitter, has been highly engaged in this year’s retail trading frenzy, tweeting about cryptocurrencies and helping send their prices soaring.

Speaking to Time on Monday, Musk said: ‘I’m not a huge hater of fiat (traditional) currency like many in the crypto­world are.’

‘But there are advantages with crypto relative to fiat in that fiat currency tends to get diluted by whatever government it is. It ends up being a pernicious tax on people, especially those who have cash savings with dilution of the money supply,’ he added.

Along with his opinions on crypto currency, Musk also tweeted a bizarre pledge to diminish criticism of his enormous wealth. Earlier this year, the billionaire tweeted: ‘I am selling almost all physical possessions. Will own no home.’ 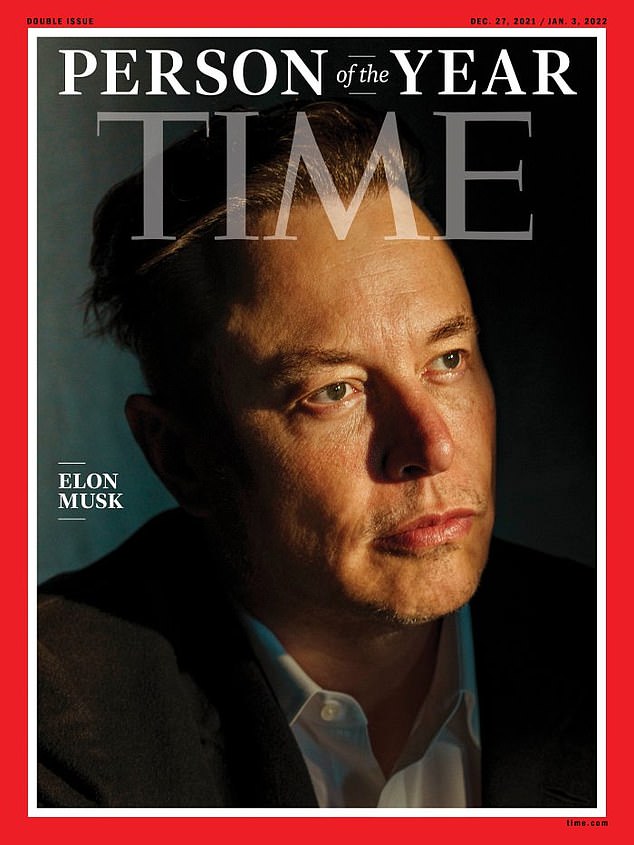 Time magazine’s Person of the Year has previously been awarded to Joe Biden and Kamala Harris (2020), Greta Thunberg (2019),  a group of journalists including Jamal Khashoggi (2018), women who spoke out about sexual misconduct including Taylor Swift and Ashley Judd (2017) and Donald Trump (2016) 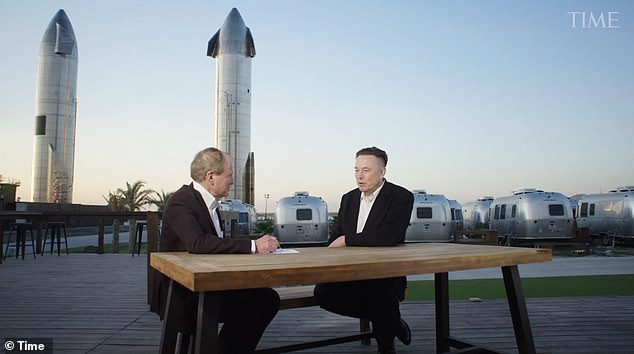 This year Musk became not only the richest man in the world but the richest man in history. His net worth of $265.4 billion makes him wealthier than some countries (Pictured: Musk sat down with Time magazine at his Tesla launch site and new home in Boca Chica, Texas)

‘I think possessions kinda weigh you down. And they’re kind of an attack vector. People say, ‘Hey, billionaire, you got all this stuff.’ ‘Well, now I don’t have the stuff — now what are you gonna do?” he told Joe Rogan in May.

At the time, Musk owned seven houses in California – six in Los Angeles within walking distance of each other.

He followed through with his pledge. Earlier this month, Musk sold ‘last remaining house’, selling his Silicon Valley estate for $30 million.

He sold the residence for $7.5 million less than the original $37.5 million asking price when it was first listed in June, according to records. He struggled to sell the home, listing it three times before finding a buyer.

Musk had previously said he wanted to sell it to a large family who will live in the home. ‘It’s a special place,’ he tweeted.

Musk now lives in a home he rents worth $50,000 in Boca Chica, Texas, near his Space Exploration Technologies Corp. Starbase rocket manufacturing plant, where he moved last year.

Last spring, he fought with California lawmakers over coronavirus restrictions which were preventing him from reopening his Tesla factory in Fremont, near San Francisco.

In April branded the lockdown rules fascist and said: ‘Give people back their goddamn freedom.’

Soon afterwards in May he announced that he would move his Tesla headquarters to Texas or Nevada and started allegedly cozying up to Texas Governor Greg Abbott.

Musk has also been a critic of California’s tax policies and claimed it had developed a ‘winning-for-too-long problem’ that was forcing out the super-rich.

Though Musk has not confirmed the name of the company that made his home, a Boxabl unit appears to be visible on the site of his home on Google Earth.

The company’s homes are tiny but stylish, set up like a studio apartment with an open plan living area, kitchen and bedroom, with an adjacent bathroom.

The properties are assembled from a folded box made of concrete panels and steel.

Teslarati reported that the model Musk, who is said to be worth $167.3 billion, is renting is a mass-produced 20 feet x 20 feet ‘foldable prefabricated home,’ named the Boxabl Casita.

Boxabl has not confirmed whether Musk is living in one of its homes but in November announced it had built a Casita for a ‘high-profile’ and ‘top secret’ customer in Boca Chica.

‘My primary home is literally a ~$50k house in Boca Chica / Starbase that I rent from SpaceX. It’s kinda awesome though,’ Musk tweeted.

His most recent viral tweet was posted on December 9, when the mogul said he is ‘thinking of’ quitting his jobs and becoming an influencer.

It came as Musk, who is the richest man in the world, sold another 934,091 shares in electric vehicle manufacturer Tesla worth almost $1 billion.

Elon Musk sold his Silicon Valley estate for $30 million, the last of his seven California homes, and moved to Texas. This 109-year-old European style home sits on 47 acres of land south of San Francisco 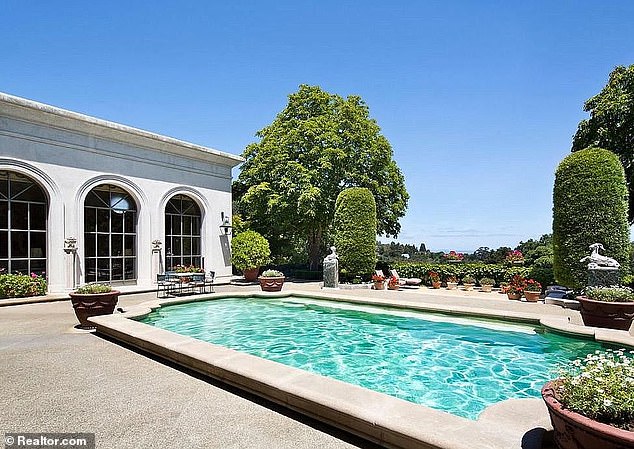 The eccentric billionaire sold this 16,000-square-foot estate for $7.5 million less than the original $37.5 million earlier this month 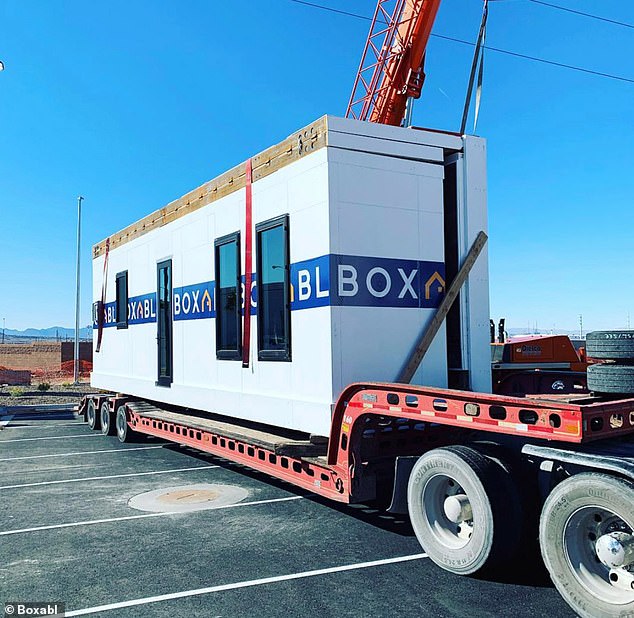 ‘Thinking of quitting my jobs and becoming an influencer full-time wdyt [what do you think],’ Musk said in the tweet, without elaborating.

It was not immediately clear if Musk, a prolific user of the social media platform, was being serious about quitting his jobs. 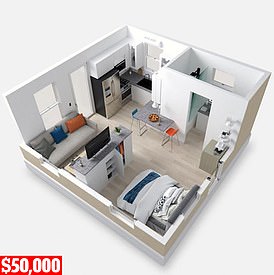 A model layout of a Boxabl Casita

Elon Musk is believed to be living in a 375-square-foot modular home made by the company Boxabl, according to the Musk fan blog Teslarati and the Houston Chronicle.

Though Musk has not confirmed the name of the company that made his home, a Boxabl unit appears to be visible on the site on Google Earth.

The company’s homes are tiny but stylish, set up like a studio apartment with an open plan living area, kitchen and bedroom, with an adjacent bathroom.

The properties are assembled from a folded box made of concrete panels and steel.

Teslarati reported that the model Musk is renting is a mass-produced 20-foot-by-20-foot ‘foldable prefabricated home,’ named the Boxabl Casita.

Boxabl has not confirmed whether Musk is living in one of its homes but in November announced it had built a Casita for a ‘high-profile’ and ‘top secret’ customer in Boca Chica.

‘My primary home is literally a ~$50k house in Boca Chica / Starbase that I rent from SpaceX. It’s kinda awesome though,’ he wrote in early June.

Musk, who is also the founder and CEO of rocket company SpaceX, said during a conference call in January that he expects to be the CEO of Tesla for ‘several years’.

Last month, he asked his followers on Twitter whether he should sell 10 per cent of his stake in the electric-car maker, to which the majority agreed. He has sold shares worth nearly $12 billion since.

US securities filings that were publicized on December 9, revealed that Musk has sold another 934,091 shares of the electric vehicle maker worth $963.2million.

He also exercised stock options to buy 2.17 million shares of Tesla, according to the filings.

On December 2, he sold another 934,091 shares of the electric vehicle maker worth $1.01billion to meet his tax obligations related to the exercise of options to buy 2.1 million shares.

He had already sold $930million in shares to meet tax withholding obligations related to the exercise of stock options, US securities filings showed last month.

Musk sold 934,091 shares after exercising options to buy $2.1billion worth of the stock on November 15. The sale was ‘solely to satisfy the reporting person’s tax withholding obligations related to the exercise of stock options,’ the filings said.

In a flurry of sales over the six trading days before, Musk sold a total of $7.8 billion worth of Tesla stock, and not all of the sales cited tax withholding requirements.

Musk’s recent purge of his Tesla shares come as whistleblowers say he misled buyers and undermined safety with an Autopilot driving system that was previously blamed for fatal crashes.

The former workers have come forward with damning allegations that the world’s second richest man contributed to the risks posed by the Autopilot system deaths because of Musk’s desire to use only cameras and ditch sensors.

At least 10 people have been killed in eight accidents in which Tesla’s Autopilot was engaged since 2016, according to reports from the National Highway Traffic Safety Agency.

‘Our intent with Tesla was always that we would serve as an example to the car industry, and hope that they also make electric cars so that we can accelerate the transition to sustainable energy,’ Musk told Time days after the news of the whistleblowers accusations broke.

‘Person of the Year is a marker of influence, and few individuals have had more influence than @elonmusk on life on Earth, and potentially life off Earth too,’ tweeted Time editor-in-chief Edward Felsenthal in announcing the news.

‘For creating solutions to an existential crisis, for embodying the possibilities and the perils of the age of tech titans, for driving society’s most daring and disruptive transformations, Elon Musk is TIME’s 2021 Person of the Year,’ Felsenthal said.