ELECTION violence fears are rising as Proud Boys were heard yelling "stand by" after news broke that Donald Trump lost the 2020 presidential election and crowds celebrated.

Video footage, shared to Twitter shortly after 12pm, shows people standing around with Trump flags as a man is heard yelling. 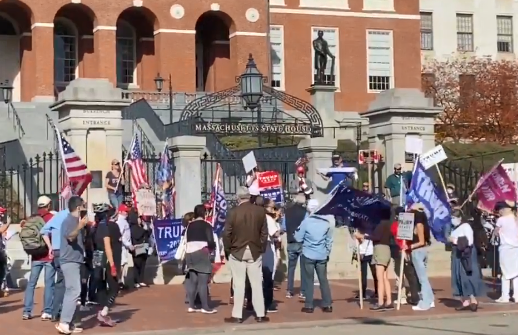 "I’m actually shaking there are proud boys at the MA state house now saying 'this is why trump said to stand by,'" the Twitter user Carter James wrote.

In the 12-second video, a small group of people are seen standing outside the Massachusetts State House in Boston.

American flags and Trump flags were also held up by some members of the group – who appeared to be calm.

As the footage plays, a man can be heard yelling: "Proud Boys! That's why Trump said at the debate, Proud Boys stand back, stand by."

Moments later, other men cheer and yell – prompting someone from being the camera to say: "OK, I'm leaving."

The man yelling in the video was referring to when President Trump told the Proud Boys to "stand back and stand by" during the first fiery presidential debate.

Trump's statement sparked an immediate reaction from the far-right organization which has been accused of inciting violence during clashes across the US. 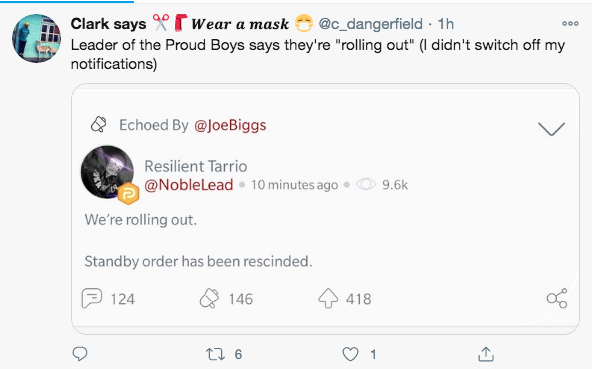 Another social media user wrote to Twitter: "Leader of the Proud Boys says they're 'rolling out.'"

"Standby order has been rescinded."

Fears of violence have spread as Biden sealed election victory after winning over Pennsylvania.

Despite Biden's win, Trump has insisted the election is "far from over" as he discovered he lost to Joe Biden while on a golf course on Saturday morning.

An official statement from president Trump reads: “We all know why Joe Biden is rushing to falsely pose as the winner, and why his media allies are trying so hard to help him: they don’t want the truth to be exposed.

"The simple fact is this election is far from over. Joe Biden has not been certified as the winner of any states, let alone any of the highly contested states headed for mandatory recounts, or states where our campaign has valid and legitimate legal challenges that could determine the ultimate victor.

"In Pennsylvania, for example, our legal observers were not permitted meaningful access to watch the counting process.  Legal votes decide who is president, not the news media."

According to the president, the Trump campaign will begin prosecuting their case to "ensure election laws are fully upheld and the rightful winner is seated."

Trump also denounced the Biden campaign for wanting ballots counted "even if they are fraudulent, manufactured, or cast by ineligible or deceased voters."