A SEMI-naked man wearing just his underwear was caught wildly waving a giant sword on a south London street.

Disturbing footage shows the man swinging the blade around as brave eyewitnesses tried to calm him down and attempt to remove the weapon. 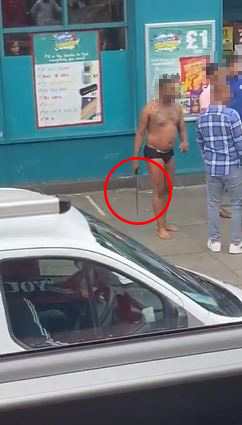 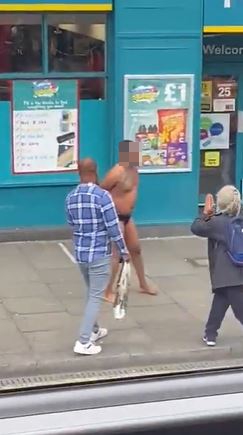 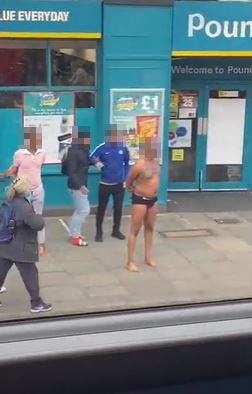 A woman and man were seen trying to talk to the man, who was standing outside a Poundland near Elephant and Castle in the Walworth area of south London.

As they attempted to reason with the man, a group of men snuck up behind him to try and snatch the blade off him.

But he spun around, forcing them to flee as he wildly waved the knife.

The couple seen reasoning with him stepped back and continued to plead for him to drop the knife.

Eye witness Ryan Harris, 23, told MailOnline he heard the commotion on the high street, and looked out his window to see the man holding the weapon.

"My housemate and I could hear commotion for a good five to ten minutes, but thought nothing of it as we live by the high street," he said.

"It got louder and we looked out my window and could see the man standing with a long thin blade.

"He looked as if he was following someone but I couldn’t tell who, he didn’t seem aggressive but rather trying to intimidate someone.

'The way he held it behind his back was almost like he wasn’t trying to be threatening."

Met Police arrived at the scene minutes after reports of the incident at around midday yesterday.

Ryan added that another person then took the blade from the half-naked man and threw it on the floor when they arrived.

He said that he didn't try and resist arrest and that cops took him away quickly.

The Sun has contacted the Metropolitan Police for comment. 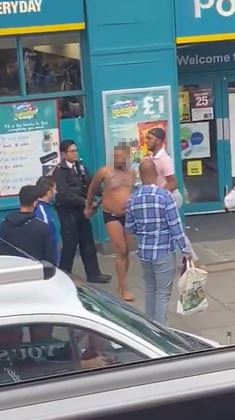