Shusha, Azerbaijan: Corpses of ethnic Armenian soldiers lined stretches of a mountain road in Nagorno-Karabakh on Friday as Russian peacekeepers in trucks and armoured personnel carriers moved in after a peace deal between Armenia and Azerbaijan.

Russia is deploying almost 2000 troops along with tanks and other armour to secure a truce agreed this week after a six-week war over the ethnic Armenian enclave in Azerbaijan and surrounding areas in which Turkey-backed Azeri forces captured swathes of territory. 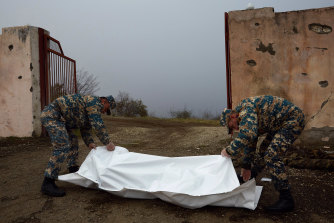 Armenian servicemen collect the bodies of soldiers killed fighting for Azerbaijan on the road where the final days of battle unfolded between the two armies.Credit:Getty Images

The scale of the destruction showed how desperate the fighting had become.

One Russian column, accompanied by Reuters reporters from the Armenian border, drove past around 100 dead ethnic Armenian soldiers strewn by the roadside.

One soldier lay prostrate in the middle of the road as the convoy laboured up a hill.

Cars, pierced with shrapnel, and vans littered the roadside as well as a burnt out tank and other damaged military vehicles. Several bodies were slumped in what looked like a bullet-riddled military ambulance. One of the dead men's legs was bandaged up, another dead man had a tourniquet. 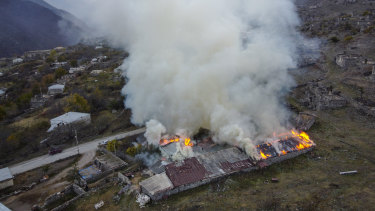 Smoke rises from a burning house in an area once occupied by Armenian forces but soon to be turned over to Azerbaijan, in Karvachar, the separatist region of Nagorno-Karabakh.Credit:AP

Several roadside gravestones were damaged, and some bullet-riddled vehicles bore graffiti, including Swastikas and a reference to a bloody Soviet-era outbreak of ethnic violence against Armenians in then the Soviet republic of Azerbaijan.

It was not clear who had left the graffiti.

More than 4000 people were killed on both sides, including civilians, with 8000 wounded and tens of thousands driven from their homes, Russian President Vladimir Putin said.

In Lachin, closer to Armenia, a group of ethnic Armenian men who said they had fought for Nagorno-Karabakh defence forces raised their hands to greet the passing Russian convoy, but said they were not happy with the peace deal.

One of them, Suren Zarakyan, 50, said he had moved to the Lachin region from Yerevan, the Armenian capital, in the 1990s after Armenians took the territory in the first war over Nagorno-Karabakh.

Married with two children, he said he had raised honey bees before the war but was not sure now whether the hives were on territory which under the terms of the peace deal would now be handed to Azerbaijan.

He said he felt shame when he heard about the truce agreement, which froze the Azeri territorial gains and paved the way for Moscow's deployment of troops in the enclave.

"I expected more from Russia and sooner," he said. "But Russia is interested in its bases and goals. It does not matter if it’s a base in Azerbaijan or in Armenia. It is interested in not letting the Turks here."

He said he did not want to live side by side with Azeris, but that Azeri forces, with Turkey's help, had been stronger and drones had played a crucial role.

"They did 90 per cent of the work," he lamented. An abandoned truck-mounted multiple rocket launcher system sat nearby.

"We were lying low and did not see anyone. But we were bombed, bombed, and bombed. In the night, in the morning, and during the day".

Near the town of Kalbajar, on a different road, ethnic Armenians could be seen leaving. Trucks full of household possessions jostled with heavily-laden cars and trucks to make their way to Armenia.