Two retired working cocker spaniels have been taken in a night-time break in as Britain’s dog-theft pandemic continues.

It is the second time Milly has been stolen but their owner now fears they will be dumped due to their age.

The dognapping follows a spike in dog theft cases in the UK during the pandemic – with incidents increasing by almost a fifth amid the coronavirus lockdown as soaring demand saw prices for some breeds almost doubled. 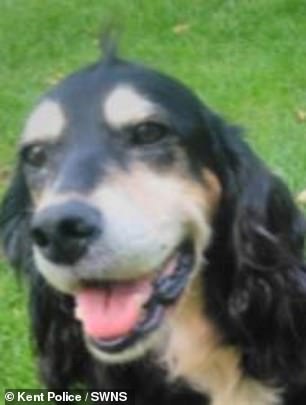 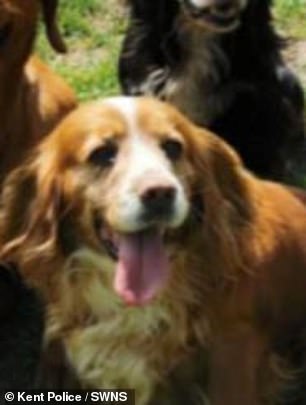 Lucy, 13, and Milly, 11 were stolen from their kennel in Kent between midnight and 1.15am on Saturday, April 24

The two thieves snuck into the back garden and cut through the kennel’s padlock before loading the dogs into their car and disappearing into the night.

Lucy and Milly’s owner Shayne, who did not wish to give his last name, said there was CCTV footage at the family’s home captured the assailants breaking into the dogs’ kennel.

The clip, which is being examined by the police, also shows a car parking outside the house before making off.

It is not the first time Milly has gone missing having been stolen 10 years ago when she was just a puppy.

But, fortunately, she was returned after a person bought her and realised she was listed as stolen online.

Shayne, 40, said: ‘Milly was actually stolen 10 years ago as a puppy, but she was recovered.

‘She fell into the hands of somebody in Hastings who thought the sale of her was suspicious. They found our advert for her on DogLost and they returned her to us.’

Shayne added: ‘They’re definitely missed. They’re a part of the family. The kids absolutely love them.’

A spike in demand for four-legged companions during the coronavirus pandemic has led to a dramatic increase in dog theft.

Shayne continued: ‘The cost of dogs and puppies at the moment is astronomically high.

‘These dogs have always been stolen, even 10 years ago when they were only £500.

‘Now they’re worth £2,000, there is a big market. They’re very valuable and people are stealing them to breed them.

‘You hear horror stories of people stealing them to bait dogs with, but we don’t want to think our dogs have ended up in that situation.

‘We’re a bit worried that they might be dumped because they’re too old to breed with, and they might end up at a rescue somewhere.’

Kent Police are investigating the incident and are urging anyone with information regarding the burglary to come forward.

A spokesperson said: ‘Investigators are appealing for information after two dogs were reported stolen during a burglary near Faversham.

‘The incident happened between midnight on Friday 23 April and around 1.15am on Saturday 24 April 2021 at an address in Badlesmere.

‘Two men are alleged to have entered a rear garden and cut a padlock on a kennel, before leaving the scene with the two spaniels in a vehicle.’ 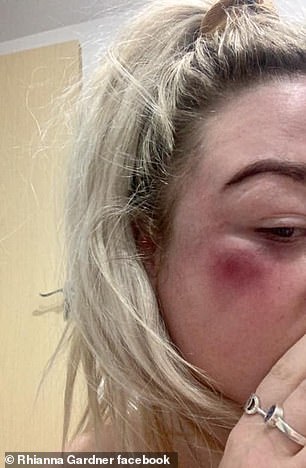 Rhianna Gardner was left with a bruised cheek following the attack in Colchester, Essex

It follows a spike in dog theft cases in the UK during the pandemic – with incidents increasing by almost a fifth amid the coronavirus lockdown as soaring demand saw prices for some breeds almost doubled.

Earlier this month, one young woman was left with a black eye after being attacked by dognappers who tried to steal her pug.

Rhianna Gardner was walking her dog in woodland in Colchester, Essex, last Thursday at 8pm when she was targeted.

She bravely put up a fight and managed to thwart the theft but was left with bruising to her cheek.

Rhianna said the dognappers ‘picked on the wrong person’ but warned other female dog owners to be on guard.

She took to Facebook with a post that read: ‘Any young girls walking their dogs at night alone please think again.

‘I was attacked last night at 8pm in daylight walking through a small open woods in Colchester.

‘They tried to take my dog but they picked the wrong person. We are both okay.

‘Ladies make sure you are not walking alone.’

Rhianna added that Essex Police had been made aware of the attack. 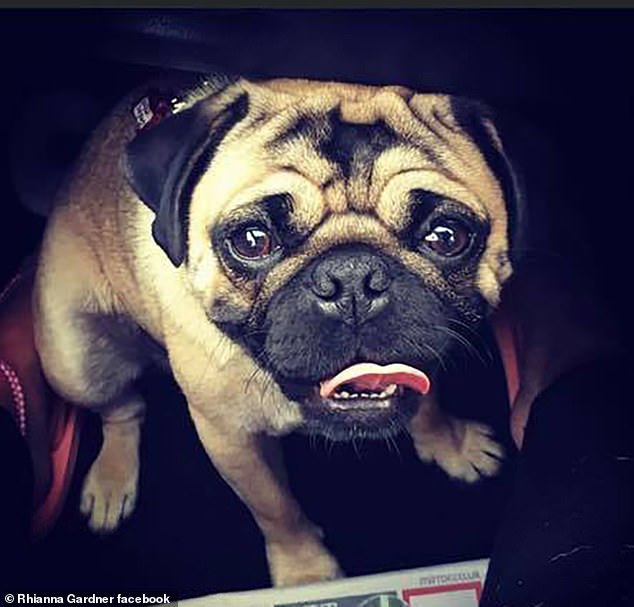 Another pet owner whose 18-month-old dog was stolen from her garden this month revealed how the canine was mysteriously returned just three months later.

Cintia Gardner, 42, her husband and two young children were left devastated when their Cocker Spaniel Honey was taken from the gated garden outside her house in a quiet Kent cul-de-sac last June. No trace of the thief was ever found.

Then, three months later, Cintia and her family looked outside to find Honey walking up to their back door after mysteriously reappearing.

Moments after the dog arrived, Cintia received a call from a stranger using an unknown number who said: ‘Go and look for your dog’.

‘To this day, I have no idea who I was talking to,’ Cintia wrote in the Independent. ‘I never found out if it was the person who took her, or some kind soul who had found her.’

Honey looked thinner but otherwise healthy, although she did have a red mark on her ear similar to the ones seen on farm animals.

‘To me it seems likely that her theft was the work of an organised crime group,’ Cintia said.

The family bought Honey for £550 two years ago with the same breeder now charging £2,500 for pups. 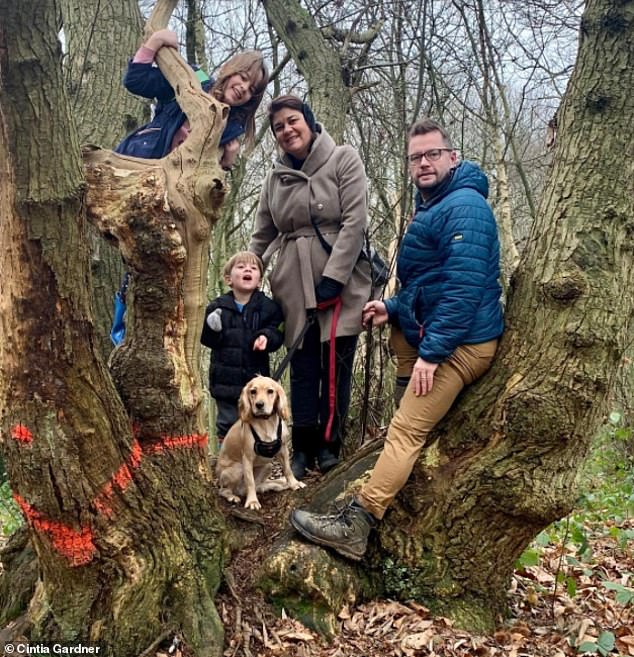 Cintia Gardner, 42, her husband and two young children were left devastated when their Cocker Spaniel Honey was taken from the gated garden outside her house in a quiet Kent cul-de-sac last June 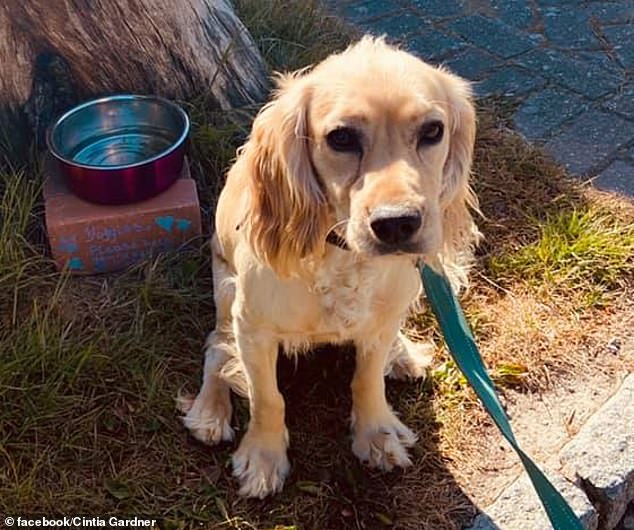 Staffordshire bull terriers, chihuahuas and cocker spaniels are among the most sought-after breeds being targeted by dognappers who are looking to cash in during the pandemic.

Google searches for ‘buy a puppy’ increased by 166 per cent after the UK-wide lockdown, announced on 23 March, meant millions of people would be working from home.

An estimated 2,438 dogs were reported stolen to police across the UK last year – the equivalent of seven a day – with Staffordshire bull terriers the biggest target.

Regional data, revealed through Freedom of Information requests, found there was a 68 per cent rise in dog thefts in the North West, making it the UK’s hotspot.

London came second, followed by the South East and Yorkshire. Just over a fifth of dogs were reunited with their owners.

Staffordshire bull terriers remain the most popular breed of dog to be targeted by thieves, according to a survey from Direct Line.

It is thought the dogs are taken for breeding purposes, with Staffie puppies selling for £1,000 each.

‘Given the high demand for dogs in recent months and the increase in prices, it is no wonder criminals are taking advantage of the situation.’

Only one in 100 dog thefts leads to court action, according to the group Pet Theft Reform, which wants to make stealing pets a specific crime.

Most prosecutions result in a fine despite the offence carrying a maximum seven-year jail term.

Home Secretary Priti Patel is looking to bring in tougher sentences as the maximum at the moment is seven years in prison.

How lockdown has triggered a spike in dog thefts

Demand for dogs during the Covid-19 crisis has triggered a reported 170 per cent rise in thefts across the country in the past year, with some breeds fetching up to £4,000 each – four times their pre-pandemic price.

A stolen dog can be used to produce litters that earn breeders tens of thousands of pounds. Thieves, including organised gangs, have targeted owners in their homes, gardens or even during walks.

In February, Home Secretary Priti Patel vowed to crack down on the ‘absolutely shocking’ rise in pet thefts.

Even officials at the Queen’s rural retreat at Sandringham in Norfolk have issued warnings to dog walkers about the threat.

Earlier this month, data revealed dog thefts increased by a staggering 19 per cent during lockdown, with Staffordshire bull terriers the prime targets.

An estimated 2,438 dogs were reported stolen to police across the UK last year – the equivalent of seven a day.

Some 97 Staffordshire bull terriers were stolen, according to the figures from Direct Line Pet Insurance. 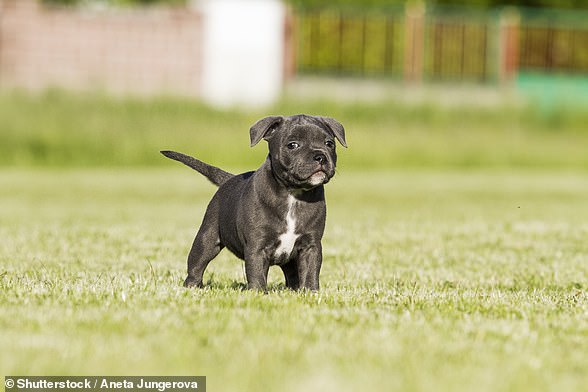 An estimated 2,438 dogs were reported stolen to police across the UK last year including a total of 97 Staffordshire bull terriers (pictured) whose puppies can be sold for £1,000 each

It is thought the dogs are taken for breeding purposes, with Staffie puppies selling for £1,000 each.

Crossbreeds were the second most targeted while cocker spaniels, springer spaniels and Labradors were also popular targets.

Regional data, revealed through Freedom of Information requests, found there was a 68 per cent rise in dog thefts in the North West, making it the UK’s hotspot.

London came second, followed by the South East and Yorkshire. Just over a fifth of dogs were reunited with their owners.

Madeline Pike, of Direct Line Pet Insurance, said: ‘Making sure the microchipping contact details are up to date can help identify a dog if it is stolen and handed in.’

She added: ‘It’s incredibly sad to see the number of dog thefts rising by such a large proportion in 2020.

‘Unfortunately, it seems the increase in dog ownership over lockdowns has also translated to a rise in dog thefts, as thieves know how valuable some of these breeds can be and see them as a commodity rather than a beloved member of the family.

‘The worry is these numbers will increase even further this year once dogs are left alone more as restrictions ease and we return to a new ‘normal’. 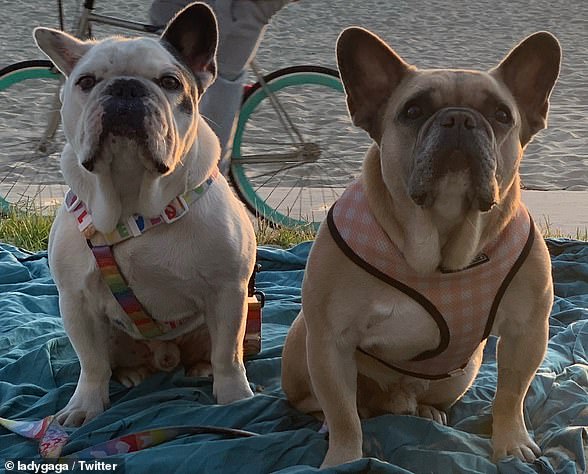 This year, Lady Gaga launched appeal after her French bulldogs were stolen at gunpoint in LA

‘Taking simple precautions like not leaving your dog tied up outside a shop or keeping it on the lead when in busy areas, will help reduce the likelihood of being targeted.’

Experts say the pandemic is likely to have had an impact on cases of dog theft, as ownership has soared since lockdown began in March last year.

Some 2.2 million people became dog owners during the first six months of the pandemic, with one in nine people spending more than £1,500 on a new puppy.

Earlier this year pop icon Lady Gaga launched an enormous appeal after two of her French bulldogs were stolen at gunpoint in Los Angeles.

Koji and Gustav were taken by a group of men who pulled up in a car and demanded her friend, who was out walking the animals, hand them over.

The dogs were found safe and unharmed two days after the incident, by a woman who was ‘uninvolved’ with the robbery.