After a gruelling, three-year campaign against plans for a floating gas terminal on Western Port, residents were elated on Tuesday to discover the Victorian government had rejected the proposal on environmental grounds.

“I am relieved, vindicated but mostly I just feel like our environment has dodged a bullet,” said Somers resident Chris Atmore. 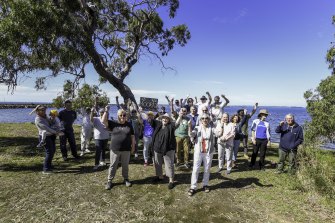 Campaigners celebrate the state government decision not to build a gas terminal at Crib Point.Credit:Justin McManus

“I know how much the environment means to the Western Port community and all the people who come to the peninsula,” she said.

Planning Minister Richard Wynne said the proposal for the gas terminal and an associated pipeline to Pakenham would have “unacceptable effects on the environment in Western Port”. The area is listed as a Ramsar wetland of international significance.

Ms Atmore said there was a 50-year history of opposition to projects that local campaigners feared could damage the wetland, including a nuclear power proposal, a bitumen plant and a container port. 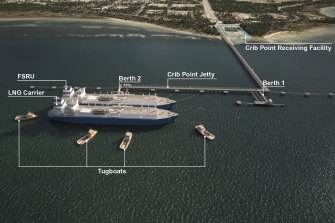 Ms Atmore was one of about 30 residents from the community around Crib Point who gathered at Woolleys Beach to celebrate the decision.

The beach would have been significantly affected by the proposed gas terminal. Jane Carnegie, of campaign group Save Western Port, said “it would have been such a dominant structure in the landscape”.

“French Island behind us would have been completely invisible.” 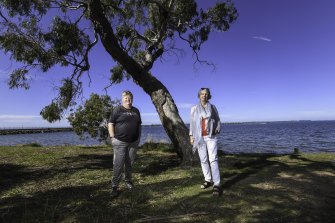 AGL had been pursuing plans to build the floating import terminal in order to increase gas supplies in Victoria and NSW and prevent winter shortfalls.

While Australia is one of the world’s biggest exporters of liquefied natural gas (LNG), most is produced in the nation’s north, far away from demand centres in the south-eastern states, and is sold on long-term contracts to overseas buyers

“This has been an exhaustive, open and transparent process and this is the right outcome for the local community, the environment and Victoria as a whole,” Mr Wynne said. “It is probably one of the most intense EES processes we’ve had in this state in a very long time.”

Environment groups on Tuesday congratulated the government for rejecting AGL’s proposal, which they said was “polluting and completely inappropriate” for Victoria.

“Gas is a polluting fossil fuel and a major cause of the climate crisis,” Environment Victoria chief executive Jono La Nauze said.

“The gas imported through this terminal would have created more than 8 million tonnes of carbon pollution – that’s about 7 per cent of Victoria’s current annual emissions.”

Western Port is a Ramsar-listed wetland, recognised for its diversity of native flora and fauna, and particularly for its ability to support diverse types of waterbirds and wetland vegetation, including seagrass, salt marsh and mangroves. It is regularly home to 20,000 waterfowl, including endangered species. 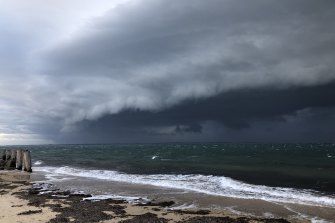 Mornington Peninsula shire mayor Despi O’Connor said she was “delighted that common sense has prevailed”. However, the shire cautioned that Mr Wynne’s report still needed to be considered by the federal Environment Minister.

Westernport and Peninsula Protection Council secretary Karri Giles said the decision would be welcomed by residents. “The feeling in the community was it was not appropriate for the area and it would put not just the environment, but the community at risk,” she said.

Ms Giles, who lives in Balnarring, said the decision did not mean that all industry would be ruled out for the area in future.

“There is a place for the right sort of industry. It just has to be at the right scale, with minimal damage to the environment.”

But nothing could stop the party down by the beach at Crib Point.

With a blue clear sky shining off the bay on Tuesday, Mr Knowles said it made him feel “it’s almost saying thank you to us”.