My large extended family organises Kris Kringle for the kids every Christmas, and in recent times there’s been a dreadful “wish list” element creeping in.

Having a list seemingly makes practical sense, ensuring that every child gets what he or she likes, not to mention eliminating the need to keep track of everyone’s constantly evolving interests and hobbies (not easy in a family with dozens and dozens of little people). 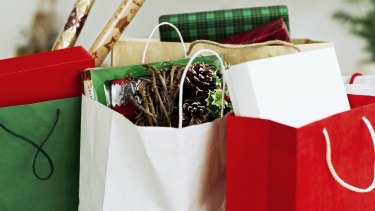 Christmas gift-giving can be a source of stress for many.

However, as I scan the shopping aisles armed with a list of specific requests, I find myself battling a sinking feeling (as if it’s not soul-crushing enough hitting the department stores during the Christmas season). Shopping from a wish list feels so robotic, so prescribed and so against the spontaneity and spirit of gift giving.

I’m as guilty as any other family member for making specific suggestions relating to what my kids would like. I didn’t bother with this when my kids were much younger and happy with anything they were given. But for my strong-willed 10-year-old daughter with very particular tastes, it would be a clear outrage in her opinion if she were to receive anything considered too “girly”, including jewellery-making kits, Lego in a pink box, or clothing in pastel colours. It therefore feels easier to say: “Just get her the latest Captain Underpants book”.

Many of my family and friends seem to prefer this list culture, claiming it saves time and eliminating the need to think about what to buy and not having to waste money on something that will end up tossed aside.

But isn’t the magic of giving and receiving gifts about the surprise and spontaneity? Atlases, decadent-scented hand creams, obscure books are among the best gifts I have ever received and were things that I would never have picked for myself. And as a gift giver, isn’t the joy in the choosing, and the thought that went into planning the perfect gift for that particular person?

This fear of risk is not only present in our reluctant Christmas gift-buying culture but also evident in such things as wedding registries, children’s birthdays and resorting to gift vouchers. Even the term “wish list”, which I secretly despise, seems to characterise our age of entitlement, where we cotton wool our kids, eschew risk and uncertainty and disappointment at all cost.

It also manifests in other aspects of our modern lives: Those series of texts you receive when meeting up with someone – I’m 10 minutes away; I’m five minutes away. Or when primary school kids are asked to write down names of five students whom they would like to be in their class for the following year. The fear here lies in the risk that they may not be in the same class as their best buddies, or God-forbid, make new friends.

I’m certain my daughter will like her Kris Kringle gift this year since I’ve had an input into it. But perhaps next year, I’ll ditch the list. “Get whatever you think she’ll like”, will be my mantra to well-meaning relatives. And to my own kids: “You get whatever gift you’re given, and it doesn’t matter whether you like it or not, it’s the generosity of giving and thought that counts.”

Not that that’ll go down well.

Diem Vo is a freelance writer in Melbourne.