This is the heart-stopping moment a buffalo crashes into a safari vehicle head-first as it tries to escape a pride of hungry lions.

Footage, taken at Kruger National Park, in northeastern South Africa, shows a buffalo running straight into a car while a lion clings on to its back.

In the video, posted on October 27, the frightened animal crosses in front of one of the jeeps, which is filled with tourists, and tries to escape the predators. 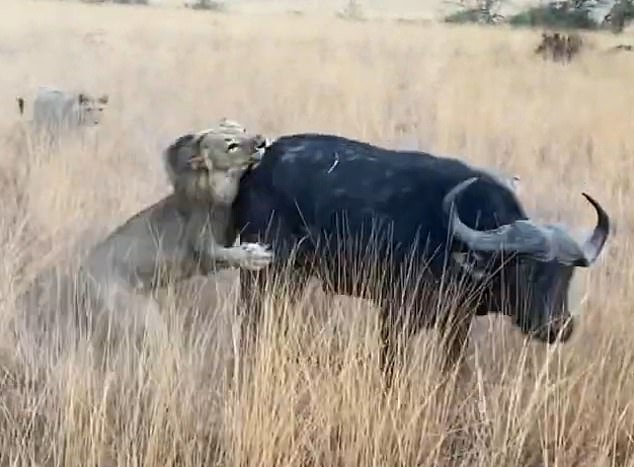 Footage, taken at Kruger National Park, in northeastern South Africa, shows lion pouncing on a buffalo and sinking its teeth and claws into the beasts hide

The buffalo is encircled by a lion and two lionesses, as the male pounces on the animal’s back, sinking his teeth and claws into its hide.

Unable to shake the lion clinging to him, the beast spins in a frenzy but is unable to get away.

In a final attempt to escape, the buffalo hits its horns off the rear of the safari truck, causing a crunching sound as they collide with the brake lights. 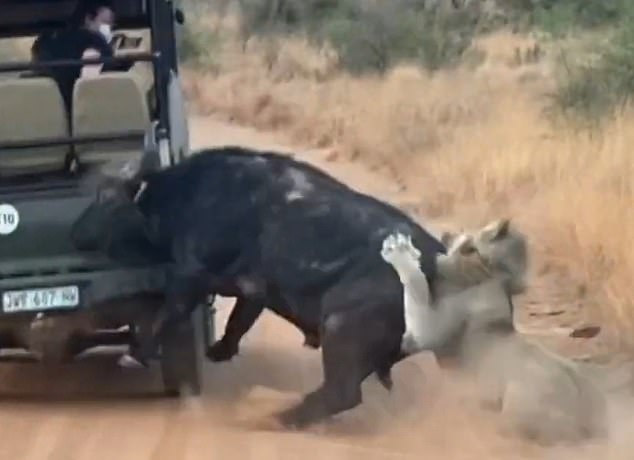 In the video, posted on October 27, the frightened animal crashes into the rear of a safari jeep filled with tourists in a bid to escape

The noise scares the lion, which retreats, giving the other animal a chance to make a break for it.

But the hunt isn’t over, and the pride bolt after the beast who has headed into the plains.

Kruger National Park is one of Africa’s largest game reserves, and the high density of animals include the Big 5: Lions, buffalo, rhinos, elephants and leopards. 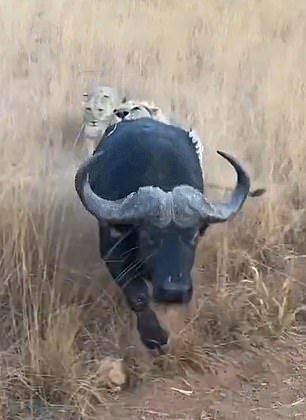 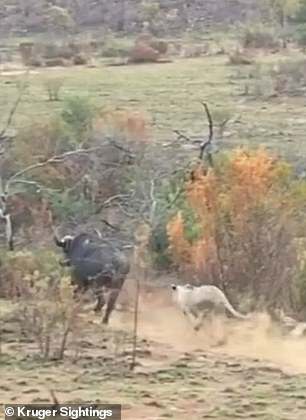 The pride of lions don’t give up easily and one clings to the buffalo, which spins to try and shake the predator off. As the prey heads for the plains, a lioness is hot on his heels

Passengers on board the vehicles described the ride as ‘calm’ before the hunt unfolded before them.

Jennifer Coleman, 39, and Liechen Tonkin, 32, were on two different safari vehicles and witnessed the event.

Liechen said that they followed the lion to see ‘what he was running after’ and ‘in a matter of seconds’ the action happened at the game vehicle.