A depraved gang kidnapped and tortured a young couple before stripping the boyfriend naked and tasering his genitals in a horrific two-day ordeal.

The terrifying attack also saw the girlfriend have a knife held against her throat and told she would be shot in the head.

At one point she also had orange juice and talcum powder poured over her and air freshener sprayed in her mouth.

The boyfriend was also forced to strip, then had eggs and flour thrown at him before being made to lie on his bed and rub Deep Heat into his bottom. 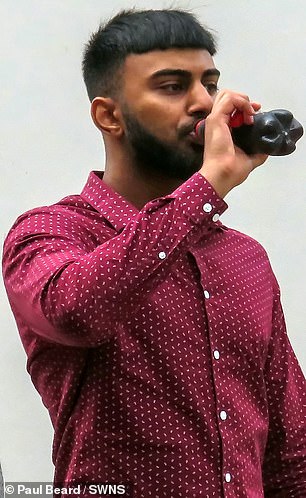 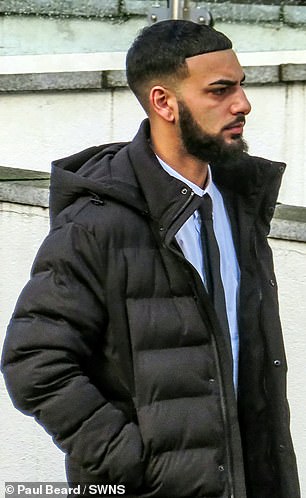 Arbbaaz Chauhan, 24, and Shaan Khanyal, 24, have now been jailed over the horrific attack

Warwick Crown Court was told on Monday their attackers stole his PS4, jewellery and other property, and he was forced to dress in his girlfriend’s clothes before being taken to an ATM where he was forced to withdraw £240.

They were only brought to justice after the couple were finally released they alerted police, who arrested them following their horrific ordeal in October 2017.

On Monday Khanyal was jailed for ten years and five months while Chauhan was sentenced to nine years.

Matis Cohene, 18, of Coventry, who was only 15 at the time, was given a two-year detention and training order.

Judge Andrew Lockhart QC told them: “All of you watched and all of you gave active support to this gross and horrific act. 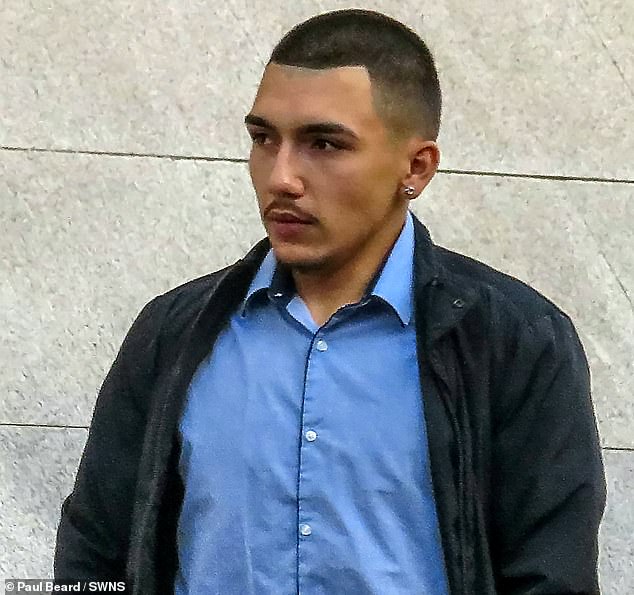 Matis Cohene, 18, was only 15 at the time when he was involved in the couple’s two-day ordeal

“This series of offences is very serious indeed.

“He was moved about and abused in the most degrading way, as was his girlfriend. These were planned, brutal events.”

The court heard the victims had attended a party in Coventry before they were lured by the gang who claimed they owed them money.

Daniel Oscroft, prosecuting, said: “The victims went to a party, and the next day they were contacted to be told they owed Khanyal money for food and drink.

“They were then contacted by someone called Wes and agreed to meet him for the money to be handed over, and after withdrawing £30, they turned up for the handover.

“The young man was then driven around for an hour while his captors sold drugs, before being taken to his flat where he was assaulted with a Taser and hit with a steering wheel lock.

“He was forced to strip and had eggs and flour thrown at him and then made to lie on his bed and rub Deep Heat into his bottom.”

He and his girlfriend were then taken to another house where the boyfriend was burned with a cigarette and slapped.

The couple were then ordered to close their eyes, and the girlfriend was told a gun with a silencer had been put against her head.

The next day a man called ‘Max’ threatened the girlfriend before subjecting her to more humiliating abuse.

Mr Oscroft said: “Max produced a butcher’s knife and held it to her throat and she was told to write down the names of everyone she had told about the previous day.

“Khanyal then poured juice over her and Chauhan squeezed talc over her head.

“They opened the attic and told her to go up, but she would not go.”

Hours later the gang cut off her long blonde hair and sprayed Febreze air freshener into her mouth.

A Taser was then used on the boyfriend’s testicles before the gang stole more of their valuables.

The next day the couple were released and they reported the ordeal to police.

In a victim impact statement, the male victim said: “Because of these events I have moved away from Coventry and my friends and family.

“I have had to start a whole new life, and I suffer from post-traumatic stress disorder and depression.”