When Dean lost his business and savings in 2018, his Crohn’s disease worsened and he was struggling to pay his bills as he lived off a meagre disability pension.

He contacted his bank, who he said treated him kindly and reduced his repayments. His council was less compassionate, rejecting outright his request to waive his $1000 rate payment and offering instead a deferment with interest repayments. 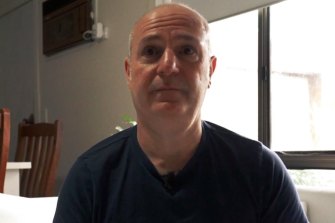 Dean says he was unfairly treated by his council.Credit:Victorian Ombudsman

“I was quite shocked because we’re a community that’s meant to help each other and council is there for the people,” he said.

“They have to realise we’re all human and we suffer. Sometimes we have ups and downs.”

The experiences of people such as Dean, who did not want his surname used, has prompted Victorian Ombudsman Deborah Glass to recommend stronger laws, interest rate caps and better oversight of debt collectors working for councils that she says are too tough on struggling ratepayers.

“We would be rightly concerned if our bank was doing more to meet its social obligations than our council,” she said.

“The public sector is expected to act in the public interest more than the private sector – but in dealing with hardship, local councils lag behind utility and other companies, including banks.”

In her probe into Victoria’s 79 councils, the Ombudsman found widely divergent protocols. Some councils displayed good practices such as engaging with financial counsellors and recognising family violence as a sign of hardship. But other councils had inaccessible and unfair policies, she found.

In one case, a payment plan was costing a family violence victim a third of her wage.

In another case, a single woman working two jobs was accruing interest that accumulated to be more than the full rate amount. One council bankrupted a pensioner with mental health issues over $30,000 in unpaid rates.

“Too many people are told their only option is a payment plan, when the legal framework includes waivers and deferrals – which some councils have a blanket policy of refusing,” Ms Glass said.

The report, tabled in Parliament on Monday, recommends changing the law to clarify the definition of “financial hardship” and capping interest rates on payment plans.

It also includes standards for rates hardship relief, including where rates debts are associated with family violence, requiring councils to have a hardship policy and a stronger oversight of debt collectors.

“The Ombudsman’s Report demonstrates that despite being well aware of the problem, the government has done nothing to stand up for ratepayers experiencing financial hardship,” he said.