Covidiot is jailed for six months after threatening to cough and spit at police while another yob gets nine months for coughing at officers telling them: ‘I hope you and your family die’

A teenager was jailed for six months after threatening to cough and spit at police while another yob was sentenced to nine months in prison for coughing at officers and telling them: ‘I hope you and your family die.’

Shocking bodycam footage shows Thomas Wilson, 19, from Coventry, boasting to police officers about having coronavirus before saying he will cough and spit in their faces.

Another man was recorded coughing at a female officer in Birmingham before chillingly telling her: ‘I have corona, you’re going to die.’ 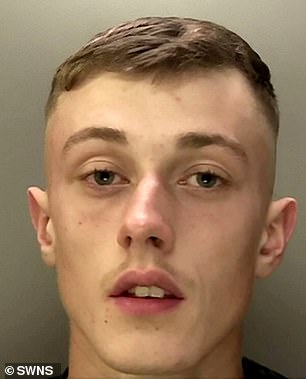 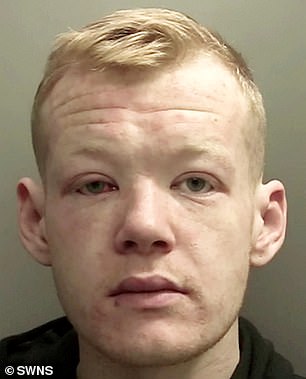 West Midlands Police released the recordings as three thugs were jailed this week for threatening to infect people with Covid-19.

Wilson was sentenced to six months in prison after he arrested on his birthday last Tuesday by armed police.

Cops scrambled to Coventry after he threatened a lorry driver with an axe and spat at him in a shocking road rage attack.

Bodycam footage shows police handcuffing him before he shouts: ‘I’ll start coughing in all your f***ing faces.’

He also threatened to spit and cough at PC Katie Wynne before officers pulled a spit hood over his head.

Wilson, of Binley, Coventry, pleaded guilty to common assault on an emergency worker and was jailed for six months.

Judge Andrew Lockhart QC told Wilson he should be ‘thoroughly ashamed of himself’ and said the UK faced an ‘unprecedented threat from Covid-19’.

He said: ‘It will attract a longer-than-normal sentence in the current health crisis.

‘The current situation dictates that the public knows what happens if you behave in this way. You should be thoroughly ashamed of yourself.’

Wilson, who appeared in court on Monday via video-link from the jail where he had been on remand, replied: ‘I am, sir.’ 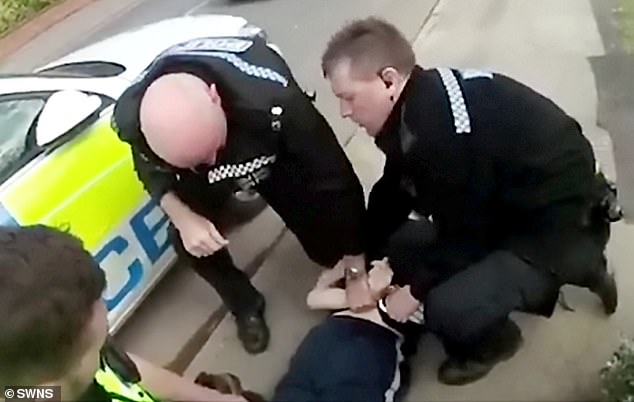 Wilson pictured being arrested and threatening officers. Bodycam footage shows him boasting to police about having coronavirus before threatening to cough and spit on them

On the same day Bevan Burke, 22, was jailed after he spat at a shopkeeper who had banned him from the store for shoplifting.

Burke stormed into Allen’s Croft Post Office, Northfield, Birmingham, on April 3 and spat at the victim shouting: ‘I have corona, you’re going to die’.

Police swooped on his home in the town and found him hiding in a cupboard.

In an audio recording, Burke was heard to cough and blow towards officers in the back of a police van.

He then tells them: ‘I’ve got confirmed coronavirus and now you’ve got it. I hope you and your family die.

‘He’s got no respect for anyone, him there, he’s going to corona and die. Yeah, I’ve got it though. I have got it, ask the doctors.’

Burke is then heard coughing while a female officer tells him to stop.

He admitted assaulting emergency workers and a shopkeeper and shoplifting and was jailed for more than nine months at Birmingham Crown Court.

A third thug, Anthony Edwards, 54, was also jailed for 16 weeks on Monday for spitting in an officer’s face.

Officers were called to a petrol station in Corporation Street at 9.45pm on Saturday following reports of a drunk man causing problems, pouring fuel on the floor and obstructing traffic.

Evans, of no fixed address, tried kicking out at them and as they arrested him he spat in an officer’s face.

Assistant Chief Constable Danny Long said: ‘It’s completely unacceptable for people to behave in this way against officers, other emergency services staff, key workers or indeed any member of the public.

‘At a time of heightened concern across the whole country a minority of people are using the threat of coronavirus as a weapon.

‘It won’t be tolerated and offenders have now been sent a clear warning: there is the very real risk you will be sent to prison.’