What does it take to launch a new school?

Ideally, for starters, the principal should have access to the school grounds. 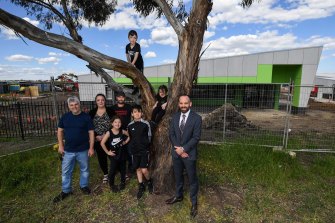 But the front gates of Greenvale Secondary College remain locked for foundation principal Mark Natoli, as he prepares for its grand opening in 2022.

A principal being unable to access the construction site of the school he will run next year is among a long list of issues nobody saw coming before the pandemic hit, but it’s not one that fazes Mr Natoli.

“That’s part of trying to open a school in lockdown,” he said.

More pressing is the rush for a spot at the new college, which has forced him to reluctantly turn away some families seeking to enrol from outside the school’s geographic zone.

It’s not a problem he anticipated. The Department of Education and Training told Mr Natoli to expect about 80 enrolments next year, but the school has had about 200 inquiries.

“At the moment, we’ve got about 125 kids enrolled, but it will be a bit more than that by the time we get to next year,” Mr Natoli said.

Greenvale Secondary College will open with an intake of year 7s only and progressively build its student population to 1100 with a fresh batch of students each year.

It is one of nine government and two Catholic schools due to open in Melbourne next year, all but one of which will serve an outer urban growth area.

But while most of those schools are being built in new suburbs, Greenvale residents have been waiting for a local high school for more than 20 years, residents’ association spokesman Mark Busuttil said.

“When people moved to Greenvale, they were sold on a notion that that block of land was going to have a high school on it – and that was in the 1980s,” he said.

Local news reports from 2005 reveal that the Education Department instead moved to sell the land earmarked for a high school, only to drop the plan as the community pushed back.

The absence of a local government school had forced families to choose between sending their children several kilometres away for an education or paying non-government school fees, Mr Busuttil said.

“If you’re rich, you go to Aitken [College], if you’re not rich, you go to Roxburgh College or Gladstone Park [Secondary College] … but there’s nothing local,” he said. “There is nothing within five kilometres of the suburb, which is a joke.”

Yola Hadchity grew up in Greenvale and went to school in Gladstone Park. She moved back to Greenvale when she married. Her eldest son, Jason, will be one of the college’s foundation students next year and his three siblings will follow him.

COVID-19 restrictions prohibiting school tours have meant the family has relied on social media posts for updates on its progress, despite living just a short walk away.

But Ms Hadchity said she was confident about her decision.

“I love it because there will be less bullying, I guess, and less peer group pressure,” she said. “Jason is the foundation of the school; he’ll be one of the leaders of the school when other kids come in.”

Mr Natoli said staff, families and students had a rare opportunity to shape the school’s culture.

The community was asked what they wanted from the new school and gave two answers: that students be academically successful and that they graduate as good people.

“One of my favourite things said was, ‘I want those kids to be good neighbours if they live next to me,’” Mr Natoli said.

Fascinating answers to perplexing questions delivered to your inbox every week. Sign up to get our new Explainer newsletter here.