A couple who have been married for more than 60 years were reunited for the first time in 12 months due to the coronavirus pandemic.

Though they did not know it at the time, the meeting was the last opportunity to spend time together before the coronavirus pandemic. 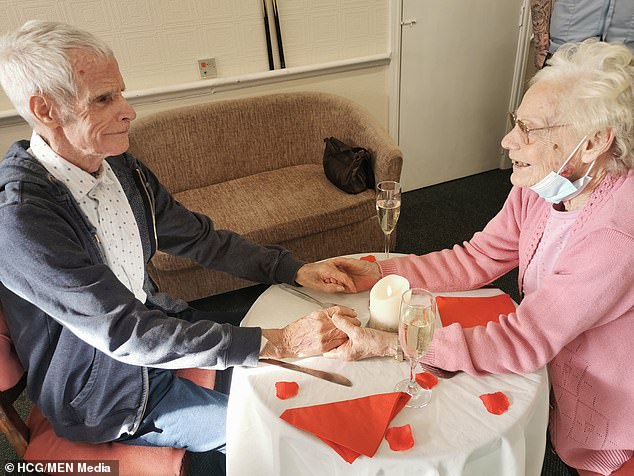 Stanley Harbour, 83, and his wife Mavis Harbour, 81, were reunited for the first time in 12 months when she moved into the same care home

Stanley moved into the home in September 2019 due to a deterioration in his dementia.

Due to Covid restrictions at the care home, Mavis was unable to go and visit her husband for a year.

The pair felt ‘lost without each other’ – having been inseparable since a chance encounter which sparked love at first sight in the late 1950s.

But early this year, Mavis finally decided to join her beloved husband as a resident at the care home because of her own health concerns. 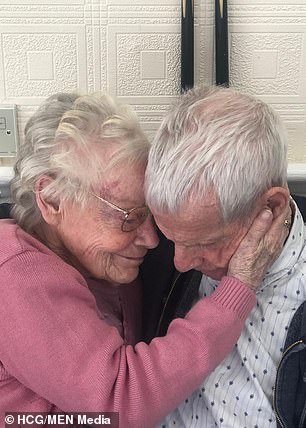 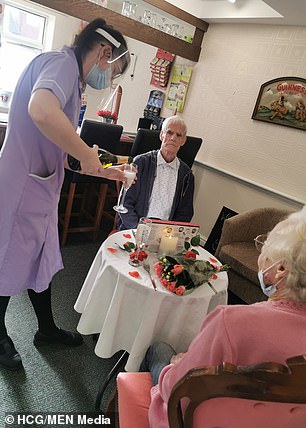 The couple had not seen eachother since February 2020 after Stanley moved into a care home in Bolton, Greater Manchester

After a 14-day isolation period, the great-grandparents enjoyed a tearful reunion which was recorded by staff at the home – leaving ‘not a dry eye in the house’.

Stanley, who presented his wife with a bouquet of flowers, said: ‘I couldn’t believe it when I saw Mavis. It was like a dream.’

Mavis said: ‘I was very pleased to see Stanley. I’ve missed him so much that I got overwhelmed and just cried.

‘I’m so happy. I never want to be away from him again. I feel lost without him.’

The couple shared a kiss and hug before being treated to a romantic candle-lit meal in the care home’s bar, featuring three courses alongside flutes of Prosecco and a box of chocolates.

Lisa Martin, home manager, said: ‘We were so pleased to reunite Stanley and Mavis. ‘There wasn’t a dry eye in the room when she was finally able to see her beloved Stanley again.’ 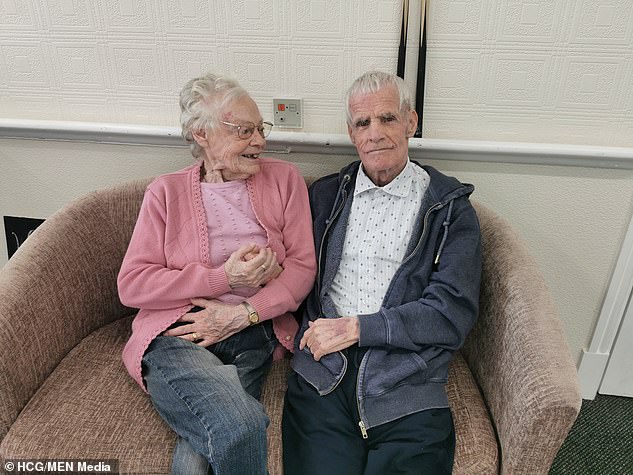 It was love at first sight for Mavis when she first saw Stanley walking on the road on their way home from work in the late 1950s.

Mavis said: ‘I was on my way home from Holts Hoisery, where I worked, when I saw Stanley.

‘I asked my Dad who he was and was told me was a joiner. I knew straight away I was going to marry him.’

They married at Bolton’s St George the Martyr Church in the early 1960s and have two sons, Peter and Neil, as well as three grandchildren and one great-grandchild.

Mavis shared the ‘key to a happy marriage’, saying: ‘We’ve had a very good marriage. They key to a good marriage is compromise. Always talk things through.

‘We had our first child together at 23 and have lived very happily.’