Hundreds of criminal trials in Victoria will not be heard until 2021 at the earliest, after the County Court cast doubt on contested hearings returning at all this year.

Jury trials have been suspended since March due to coronavirus social-distancing rules, and Victoria’s second wave of infections halted plans to resume in July. 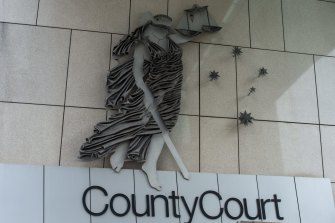 The County Court is unlikely to resume jury trials this year.Credit:Penny Stephens

The County Court, which hears the bulk of the state's criminal trials, now concedes it is unlikely trials will return in October, given uncertainty about the end date of stage four restrictions.

Chief judge Peter Kidd said on Monday: "Public statements indicate that any easing of restrictions will be staged and any opening up will be gradual and cautious.

"It seems sufficiently clear that the circumstances are unlikely to permit the court to resume jury trials at the commencement of term four."

The court had a large backlog of cases before coronavirus hit and the suspension of trials meant hundreds of accused people, plus complainants and witnesses, were waiting for cases to begin. The court earlier estimated the backlog to be 750 cases.

Criminal Bar Association of Victoria chair Daniel Gurvich, QC, said he was still hopeful jury trials could resume in 2020, and that it was too early for the courts to rule out a return.

"We are not overly confident they will occur this year because the news has been quite grim of late but everyone is making serious endeavours to conduct jury trials so the administration of justice can continue," he said.

Mr Gurvich said measures such as appointing more judges and holding trials in other public buildings needed consideration to reduce the backlog of trials. The current backlog would take years to address.

"The delays pre-pandemic were already significant for accused people and victims and witnesses. Now they are going to be measured in years not months," he said.

The County Court is yet to completely draw a line through jury trials resuming in 2020. Judge Kidd has left open the possibility of holding a limited number of jury trials after October 5 under a pilot scheme in which court rooms would need to be reconfigured to allow greater social distancing for jurors, lawyers and other participants.

Without jury trials, judges have focused mostly on plea hearings and sentences, appeals, bail applications and hearings for pre-trial argument and pre-recording some witness evidence.

The Andrews government earlier this year allowed the courts to hold judge-only trials in criminal cases but only a handful of accused people have taken up the option.