Bungling council workmen have been ridiculed after painting what could be Britain’s narrowest Keep Clear signs – which appear to read ‘Kece Eplar’.

Residents were baffled after the markings appeared at the end of Horseshoe Road in Spalding, Lincolnshire over the weekend.

The words ‘Keep Clear’ are painted in narrow, vertical rows of two letters with a huge ‘R’ displayed on its own at the bottom.

Locals have dubbed the bizarre paint job the ‘worst they’ve ever seen’ while highways bosses have said they are looking into the blunder.

Father-of-two Nigel Chapman, 49, was left in hysterics after he spotted the markings as he walked past Horseshoe Road on Saturday. 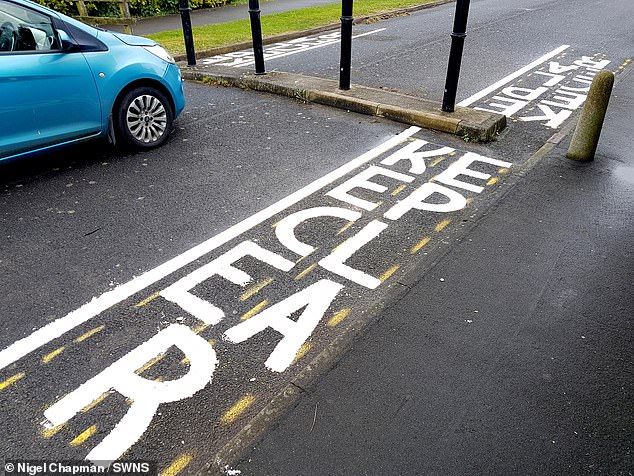 ‘It’s a bizarre way of doing those road markings,’ he said. ‘I was quite amused by what I saw and had to take a picture.’

‘I am sure there are some traffic regulations which say that letters have to read from left to right rather than being stacked on top of each other.

‘But I think common sense has to overrule that. It’s funny that people are supposed to be able to read ‘keep clear’ like that.

‘There are on four sides of that road and I would say they are no more than a metre wide. This bit of road has been cut off with bollards for at least 20 years.

‘I think the markings are there to stop cars from parking next to the curb and stopping cyclists from going through the gap.’

Mr Chapman tweeted the image with a laughing face emoji and the caption: ‘This abomination has just popped up in Spalding.’

Lincolnshire County Council responded in brilliant fashion, writing ‘Oopsy Daisy’ in the same style as the markings and adding: ‘Yeah sorry this might be us. Let’s see what we can do’.

Mr Chapman added: ‘I posted it on Twitter as a funny item, it wasn’t a dig at anybody. People have said it is what we need at the moment for a bit of a laugh. 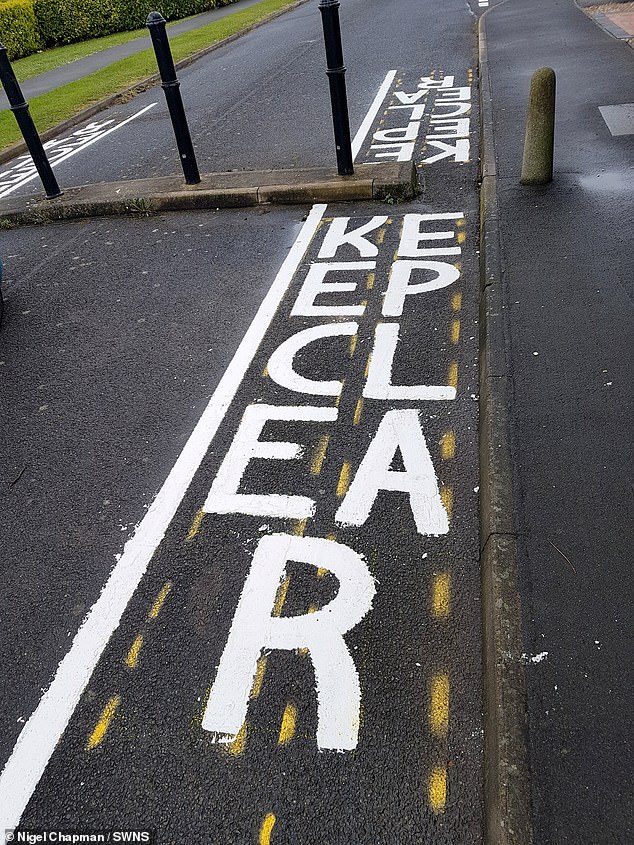 Residents were baffled after the markings (pictured) appeared at the end of Horseshoe Road in Spalding, Lincolnshire over the weekend

‘A couple of people suggested it was homemade because it’s such a botch.

‘I made a poll asking people to vote for who was responsible and the county council came top with 41 per cent.

‘A few hours later the council fronted up and came up with a brilliant response. It was really funny and they said they’ll sort it out.

‘It was a bit of light entertainment and I think only one person complained about it being a waste of taxpayer’s money.

‘Who can honestly say they have never done anything in their line of work they have botched.’

Other residents took to social media to mock the road markings.

One person said on Twitter: ‘It’s the worst markings I’ve ever seen. It’s that bad, it’s funny. But we all make mistakes, right?’

A third added: ‘Only in Lincolnshire would you seem something like this – it’s great and sad at the same time.’

‘Whilst they’ve certainly succeeded in drawing attention, I’d have to agree with residents that they don’t look quite right. We hold our hands up; this was a mistake and we’re sorry.

‘We will be removing the markings to replace them with something more conventional as soon as possible.

‘We’re also reviewing our procedures to make sure we don’t make a mistake like this again.’