A pub in Sydney's inner west has become the first in NSW to be closed by the Office of Liquor, Gaming and Racing after repeatedly breaching coronavirus restrictions.

The Unity Hall Hotel at Balmain will be closed for a week after it was caught hosting two birthday parties and failing to follow its COVIDSafe plan just one day after receiving a penalty notice for a restrictions breach. 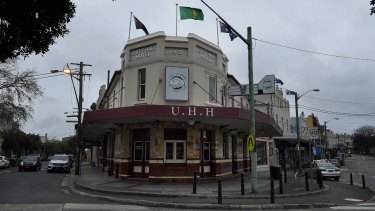 The Unity Hall Hotel in Balmain will be closed for a week after breaching coronavirus restrictions.Credit:Kate Geraghty

In a statement on Facebook, the Unity Hall apologised "unreservedly" for the breaches.

"We acknowledge that we did not understand every aspect of the changing regulations and we should have," it said.

"The standards of the hotel required by the health authorities is very high, but we recognise that the consequences of this virus are severe and not to be taken lightly."

The hotel said they had implemented "a number" of procedures beyond what was required in their COVIDSafe plan since the breaches, and looked forward to reopening next Wednesday.

"I don't enjoy seeing businesses shut, but if they are putting everybody else at risk I have no hesitation," Customer Service Minister Victor Dominello told Nine News last night.

The Victorian government is rolling out rapid COVID response units that draw on local knowledge from health service, community groups and councils in Melbourne's suburbs, an approach that has worked well in country Victoria to contain the spread of the virus.

Premier Daniel Andrews said one of the changes involved in moving to a digitised contact tracing system – as revealed by The Age yesterday – was decentralisation.

But state political reporter Michael Fowler reveals this morning that modelling used by the Victorian government to justify its strict lockdown regime is based on outdated contact tracing assumptions that do not take into account improvements in the state’s public health response.

Researchers who worked on the projections have told The Age and The Sydney Morning Herald that the Andrews government did not ask them to make forecasts that consider scheduled upgrades to Victoria's contact tracing system, nor the inevitable improvement in contact tracing as overall case numbers fall.

One hundred students have been placed into self-isolation after being identified as close contacts of a COVID-19 positive student at an eastern Sydney school.

The Kincoppal-Rose Bay School boarding student is one of two new cases linked to the Sydney CBD cluster. The case has forced the boarding school to close for years 7 to 10.

One hundred students and several staff have been identified as close contacts and placed into self-isolation.

Concord Hospital will also be closed to visitors until Friday as two healthcare staff who had worked at its emergency department were the latest cases linked to the hospitals cluster.

NSW Health is investigating links between the Liverpool and Concord hospitals outbreak and earlier cases confirmed at Liverpool Hospital.

NSW Health also issued alerts for venues across Sydney including a golf club, gym and cafe, directing people who had visited those venues to self-isolate for 14 days. People who had attended other venues including the Clovelly Hotel and Fitness First Maroubra have been asked to monitor for symptoms.

The China Doll Restaurant in Woolloomooloo is also currently closed for cleaning, after a person diagnosed with COVID-19 dined there while infectious on the evening of Thursday, September 3.

First off, let's take a look at the global figures according to Johns Hopkins University this morning.

At least another 200,000 cases have been confirmed since this time yesterday, taking the global tally past 27.4 million, while the death toll has now exceeded 894,000.

On a positive note, more than 18.3 million people have recovered from the virus. You can explore our data centre (below) for the latest figures across the world:

Good morning, it's Marissa Calligeros here, joining you for our coronavirus coverage on this Wednesday. For those of us who are counting, Melbourne is 38 days into its now-extended stage four lockdown.

I have received wonderful lockdown care packages from family in Brisbane this week, so on that note, here's a song to kick off this Wednesday morning: