A violent thief attacked a Tory politician and threatened to kill him after snatching his iPhone X while on a train bound for Manchester.

Leslie Thorley, 42, punched Robert Largan in the face and threw a brick at him after the pair became involved in a tussle over his £1,200 smart phone.

Minshull Street Crown Court heard how Thorley threatened to murder the politician, who would win the High Peak constituency for the Conservatives three months later.

Unbeknown to Mr Largan, 33, Thorley was out of prison on licence at the time for manslaughter committed in 2013. 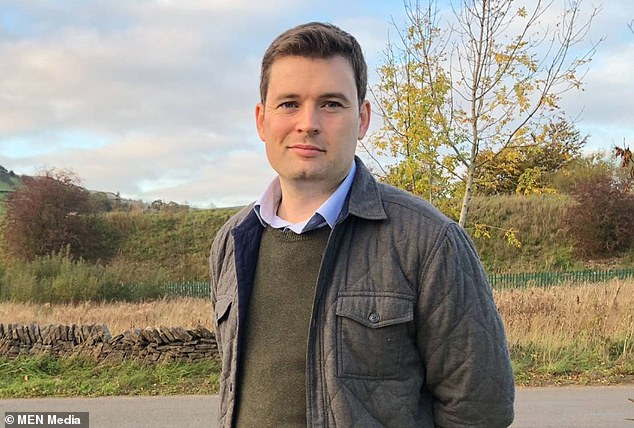 Convicted killer Leslie Thorley, 42, punched would-be MP Robert Largan, in the face and threw a brick at him after the pair became involved in a tussle over his £1,200 smart phone

In a victim statement, the politician said the theft of his phone had been a ‘significant financial loss’ for him, and was said to be deeply upset and shaken by the attack.

Mr Largan had been waiting for a train from Glossop in High Peak to Manchester Piccadilly on September 4, 2019, when he noticed Thorley ‘staring’ at him on the platform.

The court heard that both men boarded the train at around 10pm and that Thorley made his way to sit next to Mr Largan, despite the train being nearly empty.

The would-be MP thought it was ‘strange’ that Thorley, who smelled of alcohol and who was drinking from a can of beer, sat beside him and asked him ‘who are you… what do you do?’ 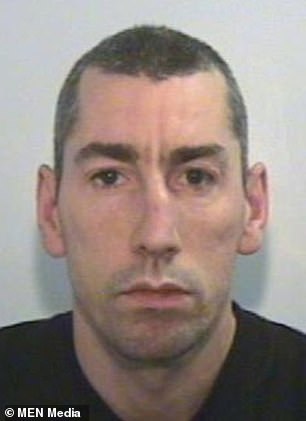 Minshull Street Crown Court heard how Thorley threatened to murder the politician, who would win the High Peak constituency for the Conservatives three months later

Prosecutor, Zaiban Alam told the court: ‘The defendant attempted to engage in conversation with the complainant and then took his phone from his hand and put it in his pocket.

‘Mr Largan tried to get his phone back and there was a tussle. The defendant refused to give it back.

‘The defendant told him (Mr Largan) to give him back a can of beer or he would smash his face in.’

The court heard that the politician was told by Thorley that if he wanted his phone back, he’d have to hand over ‘all of his money.’

Thorley then punched Mr Largan in the face, the court heard.

‘He picked up a brick and threw it at the complainant who was able to duck,’ Ms Alam said.

‘The defendant said if he didn’t stop following him that he would murder him. The complainant stopped pursuing Mr Thorley after this comment.’

In a victim statement read to the court, Ms Alam said: ‘The iPhone was worth £1,200 and Mr Largan said this amounted to a significant financial loss for him.

‘The incident upset him a great deal and he is now more aware of his surroundings then before.

‘This also caused a lot of difficulty as he could not be contacted by his employer.’

Thorley, who has a number of previous convictions for violence, was on licence at the time of the attack for an offence of manslaughter. 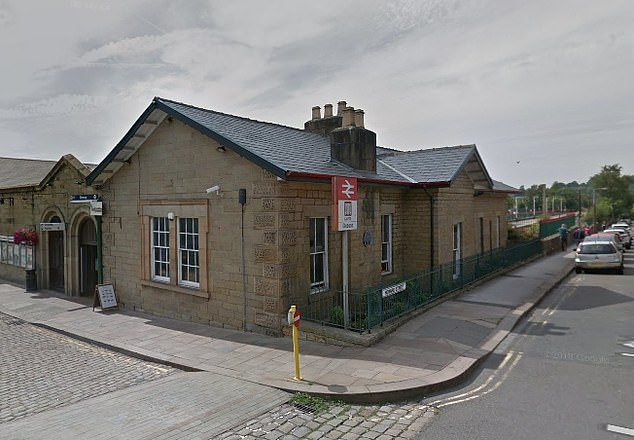 Mr Largan had been waiting for a train from Glossop (pictured, the station) in High Peak to Manchester Piccadilly on September 4, 2019, when he noticed Thorley ‘staring’ at him on the platform

He has since been recalled to prison where he will serve the remainder of his licence period – until 2024.

At Minshull Street Crown Court, Thorley was jailed for 44 months to run concurrent to that jail term after admitting offences of theft and battery.

Thorley was also sentenced for an offence of GBH following a separate attack on a man a few weeks before on August 9, 2019.

The court heard that during that incident, Thorley and a co-defendant attacked a couple outside their home in Glossop following a row over a bag of cannabis.

Thorley’s victim was left with a broken jaw, nerve damage and had to stay in hospital for five days following the attack.

He was eventually arrested by police on September 16, who were forced to break entry into the property he had been sharing with his girlfriend.

Thorley’s defence barrister, Robert Elias, urged the court not to impose an extended sentence on his client, claiming the attack on August 9 was not premeditated. 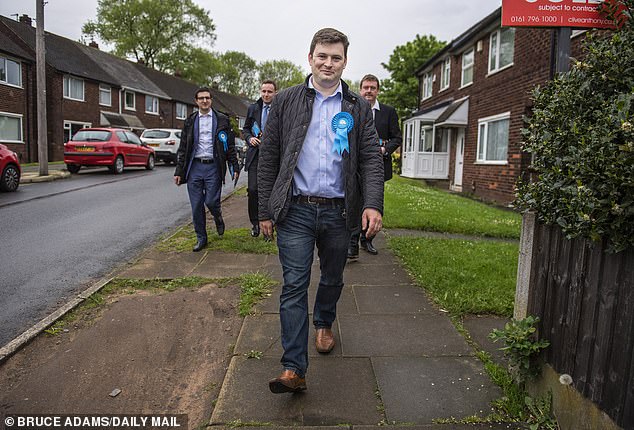 Mr Largan took the High Peak constituency for the Conservatives during the December general election, beating Labour’s Ruth George by 590 votes. Thorley, who was out on licence, was recalled to prison

Sentencing, Judge Paul Lawton said: ‘You were on license for manslaughter at the time of these offences.

‘For anyone who had killed another man in the street, one would think you would avoid violence in the future, but you have not.

‘The only reason I am not passing an extended sentence is because you have been recalled on licence until 2024, and the law does not allow me to pass a consecutive time of imprisonment for these offences.’

Thorley was sentenced to 44 months imprisonment to run concurrently with his extended licence period.

This means the jail term for the two recent offences will not make any difference to Thorley’s current release date in 2024.

He overturned a 2,322 vote majority to replace Ms George, who was elected in 2017. He unsuccessfully contested the Bury South constituency for the Tories in the 2017 general election.

After a Magistrates Court hearing in 2020, Mr Largan said: ‘I just want to thank the police for their comprehensive and speedy response. They have been brilliant from start to finish.’