Paul Harrison, a 57-year-old electrician in Milton Keynes, was told almost immediately by his employer to get back to work when Downing Street said on Sunday that people should return to their workplaces if possible the next morning.

The government has not yet published safety guidance, and confusion about who should go back to their workplaces and when grew when the foreign secretary, Dominic Raab, later instructed people to do so on Wednesday – even though some, including Harrison, had already been ordered back.

“I said I’m definitely not ready for that. They only announced it at 7pm last night and I was messaged by my work as soon as it finished saying to come back tomorrow,” Harrison said.

A compromise was reached and he agreed to return on Tuesday, fitting out four social homes per day. “I’m less than happy visiting multiple houses,” Harrison added. “My first job tomorrow is in an empty one but I don’t know what the future holds after that.”

Amid uncertainty following the change in slogan in England to “stay alert” rather than “stay at home”, the social divide between those who can work from home and the manual workers who cannot is becoming increasingly apparent.

Criticism is mounting against the plans, particularly after people were pictured in tube carriages in London unable to distance from each other on Monday morning.

Ed Miliband, the shadow business secretary, tweeted that ordering a return to work in manufacturing and construction with 12 hours’ notice and no official safety guidance was “irresponsible and wrong”.

But the announcements may obscure the fact that many people in these sectors never stopped working.

“We were under the impression that we should continue working,” said James Hobson, a 33-year-old metalworker in Bewdley, Worcestershire. “Physical distancing in a shop full of machines can be difficult, especially if two machines that are needed to be worked are side by side.” 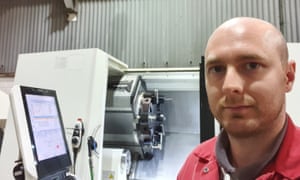 Hobson has asthma, making him more vulnerable to coronavirus, and although he considered staying home – particularly after two colleagues took time off with suspected symptoms – paying his mortgage came first as he did not receive occupational sick pay.

“I have constantly been weighing up the risks to my health with my finances, and unfortunately it seemed to end up that going to work was the only option.”

Safety should be paramount “even though the country is on its arse”, said Drew Evans, a builder in Staffordshire who has not stopped working throughout the lockdown. He said he knew of construction sites, including luxury developments, with no physical distancing or protective equipment.

“Safety onsite means helping each other and sometimes it is impossible to not come within two meters of one another,” Evans added.

Ali Yusuf, a security guard in central London, said the last two months had been “business as usual” and that he and his colleagues had been petrified. “We work next to a mortuary and see corpses coming in body bags,” he said. “Sometimes it has filled up and overflowed, with bodies waiting on trolleys in the corridors.”

He said the changes to the lockdown measures made little difference for him and his colleagues: “Johnson told people who can work to go to work – well, people like us have already been working 12 hours a day, with no masks, gloves or sanitisers. We feel like we’ve been put in danger.”

Data released by the Office for National Statistics on Monday showed that male security guards like Yusuf, along with taxi drivers, are much more likely to die from coronavirus than professionals such as accountants and lawyers. There are growing fears after the deaths of a number of taxi drivers. 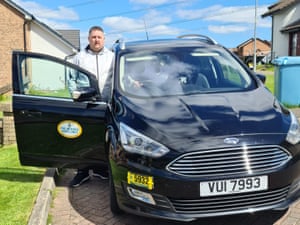 “The bills have still been coming in,” said Barry Sloan, an Uber driver and union official who has also started working for Just Eat due to a lack of demand for taxis. “I got a payment break from my credit card company, but I know those bills are going to hit in a couple of months time. I have to work, I have to put food on the table.”

However, the statistics suggesting greater risks to taxi drivers had made him reconsider working. “Its made me think twice about accepting a trip from today.”

Those returning to work echo the concerns about safety. Jax Hill-Wilson, 63, who started delivering cars across Oxfordshire on Saturday, cannot physically distance due to the nature of the job, which requires everyone to work in pairs. 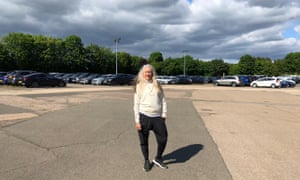 “That’s how the business model works: it comes down to whether people are happy to sit in vehicles a few inches away from each other,” she said. “I don’t know how you get around that.”

Some names were changed