Hold onto your lattes! Commuters face a battering from 55mph gusts this morning after overnight winds brought trees and shop signs crashing down – with mix of sun and showers to last all week

Commuters face a battle to keep hold of their lattes this morning as 55mph gusts batter parts of England – after winds brought trees and shop signs crashing down last night.

Met Office chiefs have today issued a yellow weather warning, with high winds sweeping down from the north-west and hitting the south coast of England.

Brighton was this morning the windiest part of the country, with gusts of up to 55mph battering the Sussex coastal city.

Wind speeds of up to 50mph have battered Merseyside this morning, with the coastal town of Crosby bearing the brunt.

It comes as police in London were last night pictured pulling up a fence which had crashed down into the middle of a road in upmarket Mayfair.

In Whitehawk, Brighton, a tree was blown down, narrowly missing the front of a block of flats. And a sign for Poundland was also blown down into the street as winds swept the south-coast last night.

The Met Office is today warning of disruption to travel, damage to trees and large waves in coastal areas as part of a weather warning covering much of Wales and the south of England. 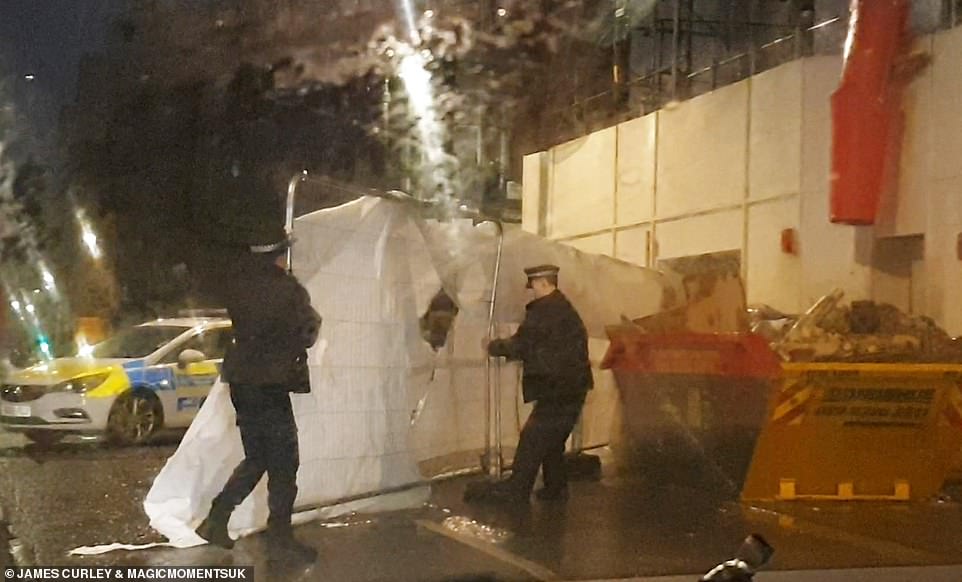 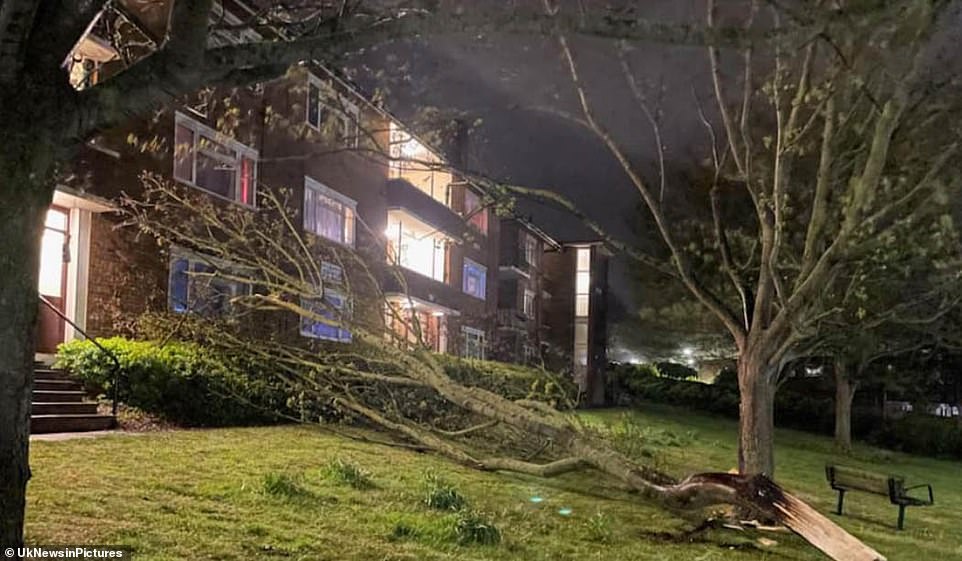 In Whitehawk, Brighton, a tree was blown down, narrowly missing the front of a block of flats 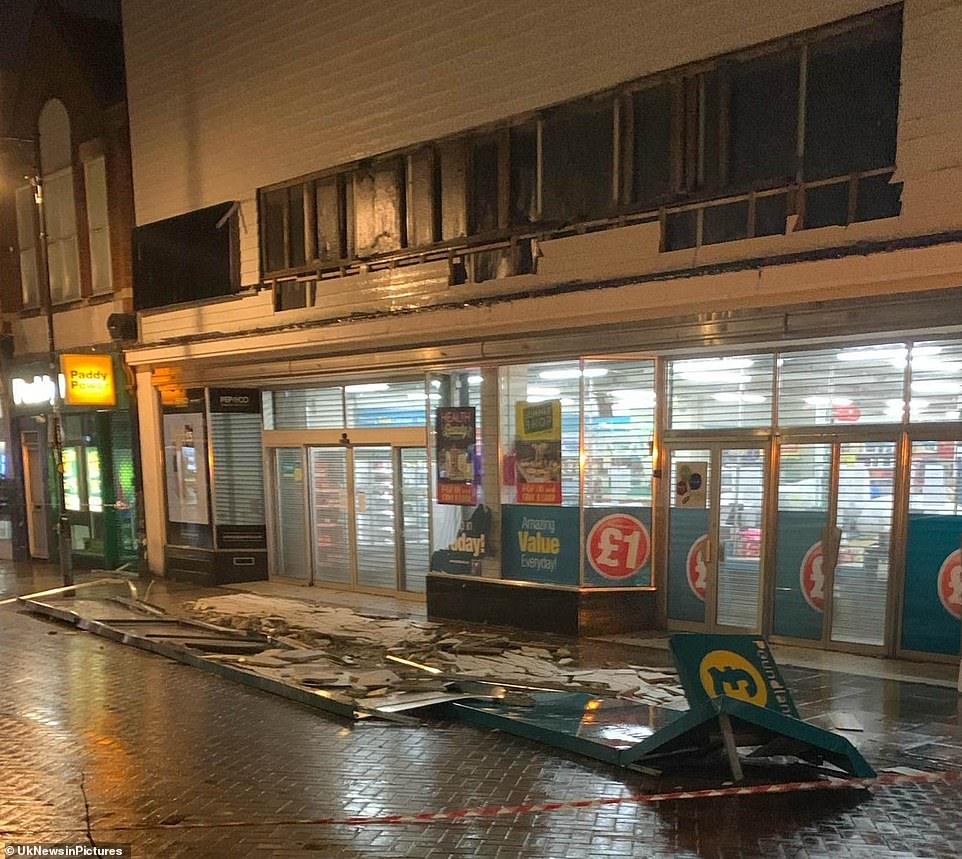 The warning, which is due to stay in place this morning, warns of spell of disruptive winds from Monday afternoon until Tuesday morning.

As part of its warning, the Met Office said: ‘Some delays to road, rail, air and ferry transport are likely.

‘Probably some bus and train services affected, with some journeys taking longer. Delays for high-sided vehicles on exposed routes and bridges likely.

‘Damage to outdoor temporary structures possible, with some tree branches down too.’

It comes after hopes of a bank holiday Monday of lockdown freedom were dashed by miserable weather.

Pub goers across England had hoped to enjoy a sunny three-day weekend to allow them to hit the beer gardens once again after Covid restrictions were lifted on outdoor drinking last month.

Restrictions on pub gardens have also been lifted in Scotland, Northern Ireland and Wales.

But the rush back to the pubs have in parts been hampered by intermittent weather across the UK. 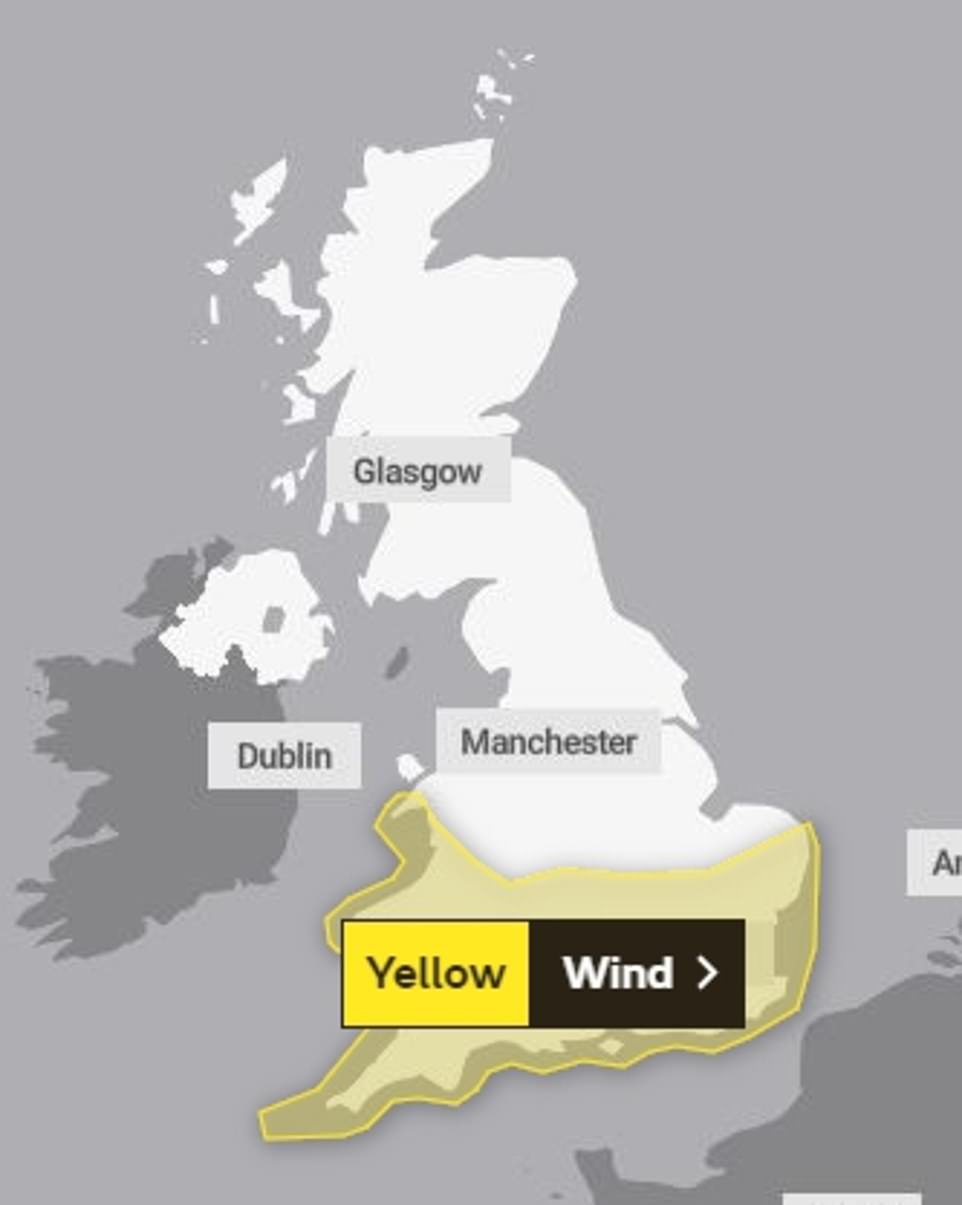 The Met Office is today warning of disruption to travel, damage to trees and large waves in coastal areas as part of a weather warning covering much of Wales and the south of England 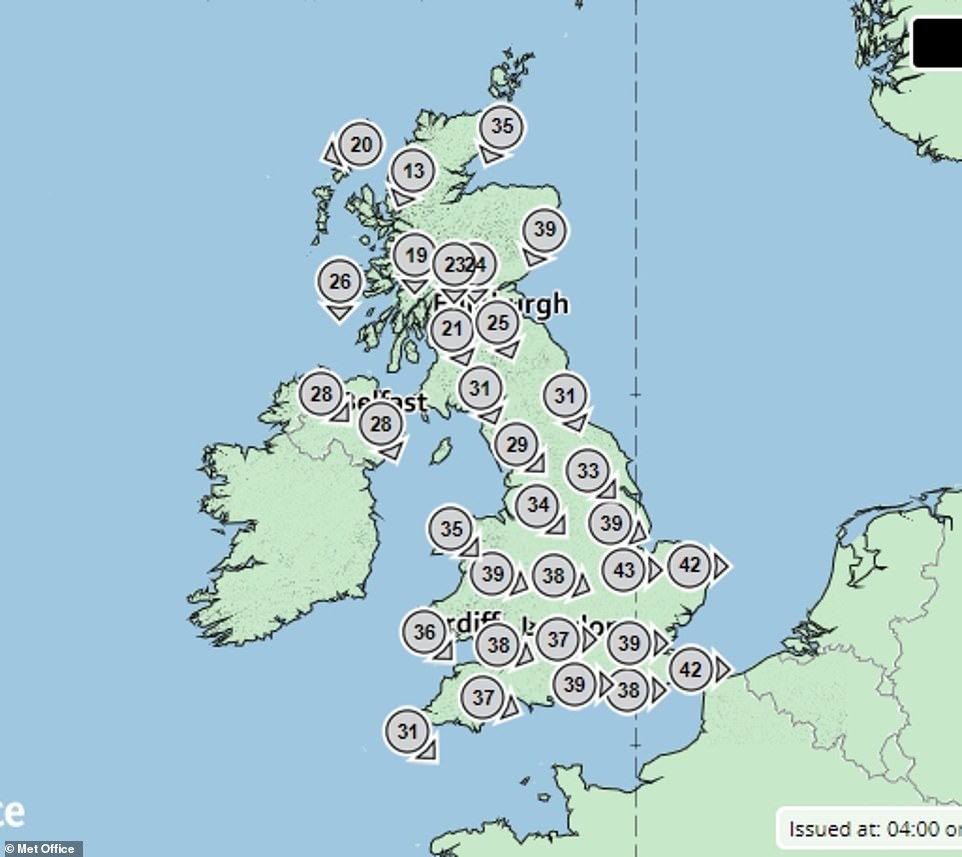 The wind is sweeping down from the north west and along the south-coast, with Brighton one of the worst hit areas. The Met Office has wind speeds of up to 40mph, with gusts of up to 55mph recorded in some areas

Scores of defiant drinkers and diners were left clutching their umbrellas as the storm force winds and showers made their way across the country earlier today, with pub owners closing their outdoor marquees and gazebos as the weather continued to deteriorate.

In Manchester city centre, diners braved the elements under their umbrellas as the rain washed over the city while others sported waterproof coats as they enjoyed a funfair in Huddersfield, West Yorkshire.

Meanwhile, in Sidmouth, east Devon, there was little alfresco wining and dining as scattered blustery showers swept across the region and sent temperatures plummeting to 10C.

Even planes have been struggling to land in the gale-force winds on what forecasters predicted would be a miserable end to the bank holiday weekend.

Footage shows the moment a KLM flight from Amsterdam turns almost sideways as it attempts to keep in line with the tarmac through crosswinds at Bristol Airport earlier today.

Elsewhere, along the River Cam in Cambridge, a group of people sat under blankets as they braved the cold weather on Bank Holiday Monday. 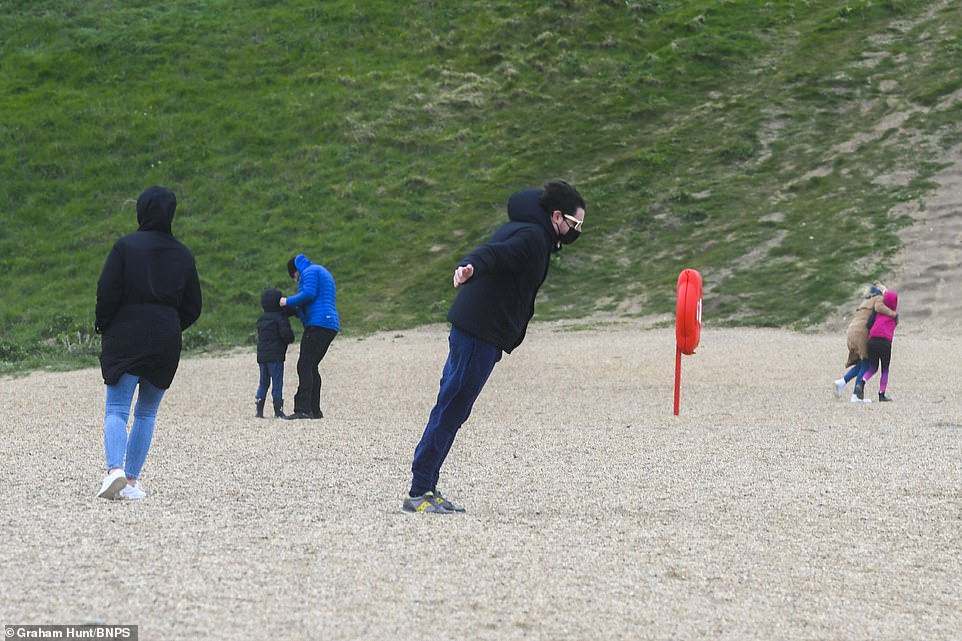 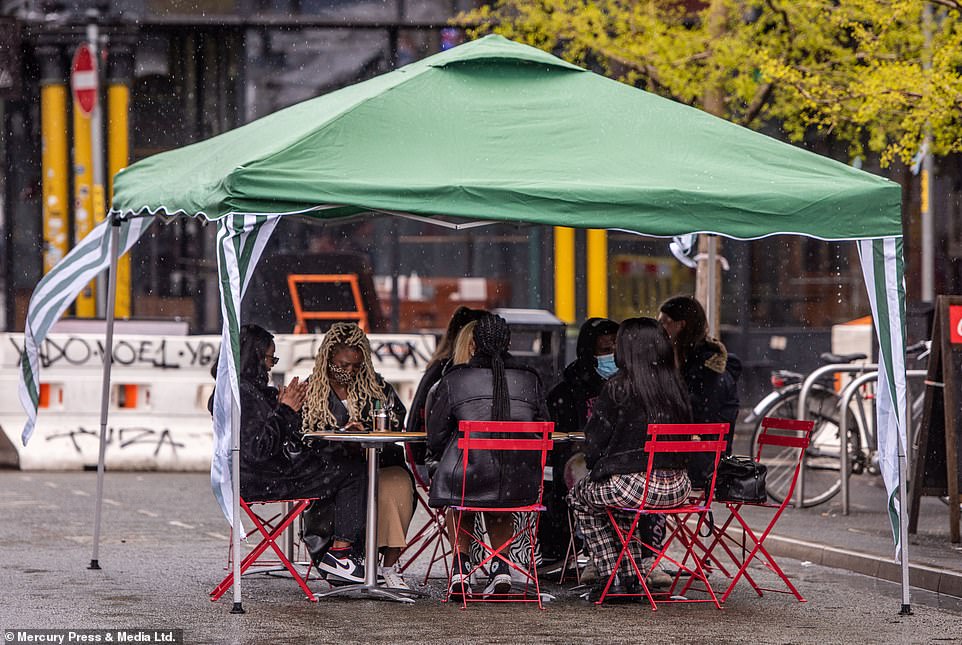 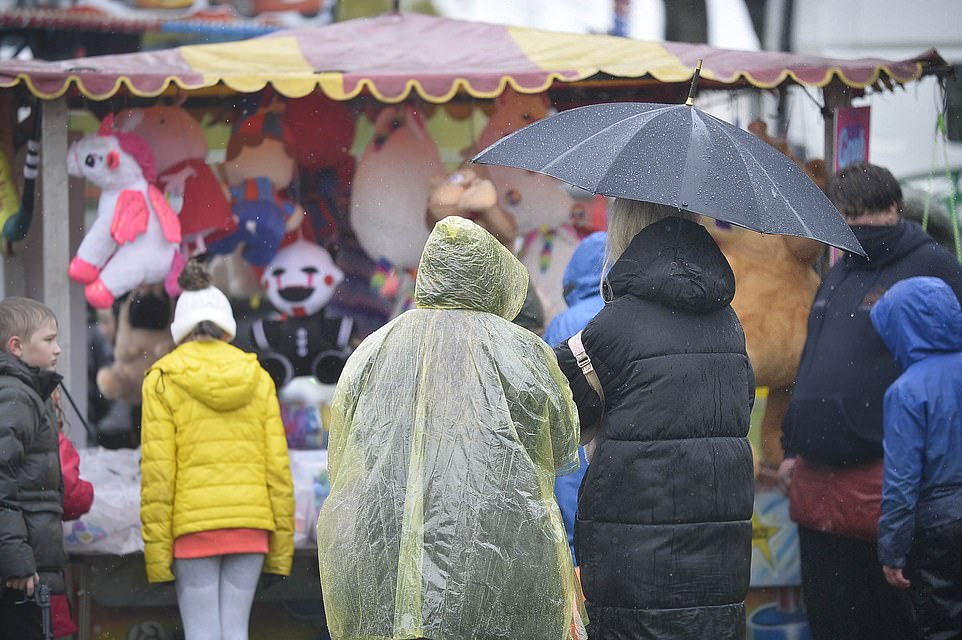 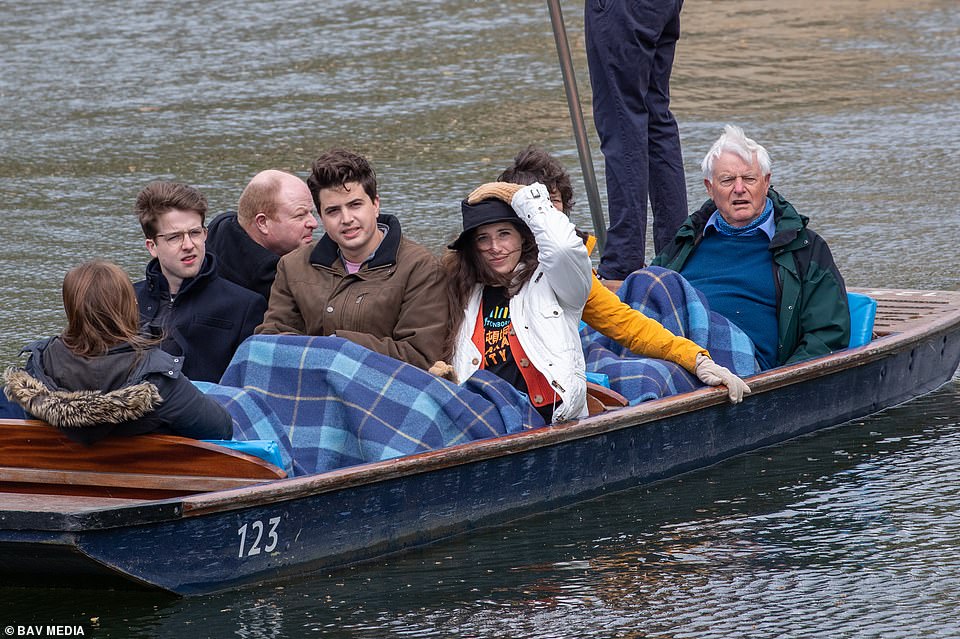 And the changeable conditions are set to continue this week, according to the Met Office.

Today their forecast reads: ‘Many parts cloudy with showers or longer spells of rain, some heavy, especially in the north. Some sunny spells, mainly in southern England and northern Scotland.

‘On Wednesday there will be sunny spells and showers, some heavy with hail and thunder, especially in the north and east.

On the rest of the week, the Met Office forecasts: ‘Sunny spells and showers through Thursday and Friday with overnight frost in places.

‘Rain and strong winds spreading north and east through Saturday as it becomes warmer in the southeast.’