Closing drive-through restaurants might have been an ‘overreaction’ and undermined the battle against coronavirus, Boris Johnson’s former business adviser warned today.

Andrew Griffith, who worked for the PM until he was elected as a Tory MP in December, said outlets such as McDonald’s were widely used by emergency workers before and after shifts.

He lashed out at those who had ‘shamed’ companies for remaining open, saying they should be ‘applauded’ for helping the country stay ‘open for business’ as much as possible.

The Arundel and South Downs MP warned that otherwise the economy will struggle to recover after the crisis. 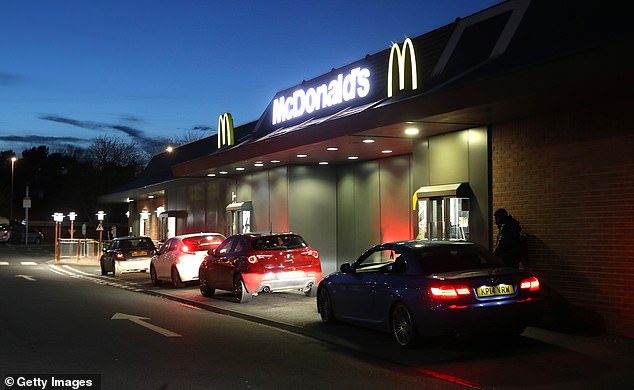 Andrew Griffith said outlets such as McDonald’s (pictured, a branch in Northampton last week) were widely used by emergency workers before and after shifts

Writing in the Sunday Telegraph, Mr Griffith – who used to be a senior executive at Sky – hailed health workers and others on the front line of the coronavirus war.

But he said there should also be praise for the companies that have ‘stayed open to keep the lights of the economy on and to maintain vital aspects of life for the fortunate 99 per cent of households who are not expected to end up admitted to hospital as a result of this virus’.

He said the NHS ‘chain’ was ‘only as strong as its weakest link’.

‘Indeed, in an era of complex, interconnected supply chains, the roles of warehouse staff, the postmen and women, farmers, garage mechanics, takeaway owners, telecoms engineers, bank loan processors and all those working in supermarkets, factories and food processing companies are equally vital.

‘Far from such firms being shamed for remaining open as some on the Left have chosen to advocate, they too deserve our thanks and applause for their work helping during this national emergency.’

Mr Griffiths complained that ‘some large firms may have already overreacted and actually undermined the national effort at this time’.

‘The drive-through McDonald’s in my constituency was one of few such facilities in rural West Sussex, full of blue-light workers day and night, who were grateful for a freshly-made coffee, a clean WC and a hot bite to eat on the way to or from their shift,’ he said.

‘Where are all those essential workers supposed to go now?’ 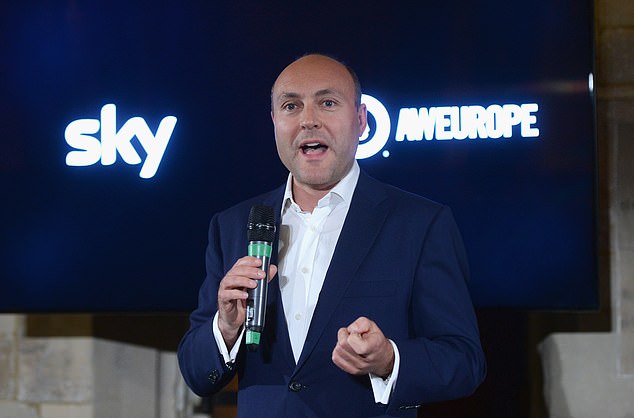 Mr Griffith (pictured in a previous role as a Sky executive) lashed out at those who had ‘shamed’ companies for remaining open, saying they should be ‘applauded’ for helping the country stay ‘open for business’ as much as possible

Mr Griffith warned that rival powers such as China had not shut down to the same extent.

‘The economy – not to mention our children’s generation – will thank business leaders for not overreacting,’ he said.

‘Those Asian economies that never shut down to the extent that we already have are awakening and more than happy to plug the gaps left when the phone at a UK supplier sits ringing unanswered.’

Mr Griffith said Chancellor Rishi Sunak had put in place support for business and workers that was the ‘most comprehensive anywhere in the world’.

‘With this sort of support, business and the self-employed now have greater certainty and a valuable safety net,’ he wrote.

‘In return, let’s maintain cool heads and keep the economy open for business. ‘