Residents in Melbourne’s tallest towers are being tormented by creaking noises so loud they are unable to sleep and fear for their safety in a plight made worse by strong winds lashing the city and COVID-19 lockdowns keeping them indoors.

In 2019 The Age revealed creaking and banging noises at the Australia 108 and Prima Pearl towers were so disruptive they had caused mental health problems for the residents and forced owners to sell units. 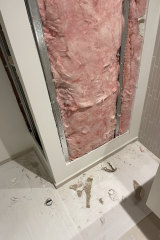 Multiplex cut holes in a Melbourne Square resident’s walls but this did not fix the problem.

“To me, it seems like an issue they are well aware of and now they have failed to remedy it in new builds,” the resident said.

“It’s unethical for a developer to release a building to have tenants subject to noise like this. People need to be mindful of buildings developed by Multiplex.”

After the resident made a formal complaint, Multiplex examined the apartment and said the creaking noises were caused by incorrectly installed screws.

However, attempts to fix the problem have been unsuccessful, according to the tenant. “They cut the wrong wall and loosened the wrong screws and never came back to remedy the correct wall.”

Residents of Aurora tower have recorded noises higher than 60 decibels that continue into the early hours of the morning. Complaints have been lodged, but residents say these have been ignored.

One resident, who also declined to be named because she feared speaking out could affect her tenancy, said the noise had been so disruptive she had to take time off work. ”I’ve tried to move into the front room but [the noise] is everywhere,” she said. “Once it starts, it doesn’t stop.“

A complaint sent to Aurora’s management on May 25 labelled “Excessive noise” described “creaking so loud it’s impossible to sleep”.

“I’ve mentioned this in the past and been told the building manager will get back to me with what they can do. But still no reply. It’s been over a year now … Please can someone help with this.”

Another complaint sent in September reveals a pattern of inaction. “I’ve complained about this many times now! It is impossible to sleep with the noise that comes from the building in the wind, to the point where I do not want to live here anymore,” a resident wrote.

That report was closed on the same day with a note: “Your issue has been forwarded to [the] building manager and he will reply on your issue as soon as possible.”

Meanwhile, creaking noises have persisted at Australia 108. Screenshots from an internal messaging platform show people on multiple floors have been affected this week in what residents have described as “hell”, “insane”, “ridiculous” and a “nightmare”.

Another said they also didn’t feel safe. “I can’t focus on my work. My instinct is telling me to get the f out of this building,” the resident said.

Multiplex asked residents to record the noises and place stickers on walls to mark where the sound was coming from.

The company told residents this week: “We would like to advise that Multiplex are committed to assisting in rectifying these complaints (where possible) and will be in contact with you directly to review each complaint.”

Australia 108 resident Ken Willis, who moved into the building a month ago, praised the amenities and interior design but said the creaking noises occurred 40 per cent of the time, were frightening and were replicated across the whole building.

“It’s really hard to explain,” the 38-year-old management consultant said. “It sounds like a giant robot is trying to bend a huge iron bar. It’s like if you can imagine all the joints in the building, the cladding, all ramming together in one split second and it reverberating throughout the entire room and down into the corridors and where the stairs are, the lift area, everything. I’ve never heard anything like it.”

A Multiplex representative said there were no structural problems with Australia 108 or Melbourne Square, adding the noises were caused by extreme wind.

“Where residents experience noise in non-extreme weather conditions, we will work with the building managers to make an assessment and determine if any minor rectifications are required,” the representative said. “This is standard procedure on any new building.”

Mr Willis, who has lived in high-rises around the world, was unconvinced by this explanation. “For them to say this is normal is just false,” he said. “What can be done? Who knows. This is the sort of thing that could end up in fairly complex construction litigation.”

Mr Willis said he was a deep sleeper so the noise had not kept him up at night, but he was concerned about other residents. “There are people who could be in a very dangerous mental health state because of what’s happening here.”

Structural engineers have poured money into investigating the problem, which is linked to defective construction materials and techniques used by major developers around the world. 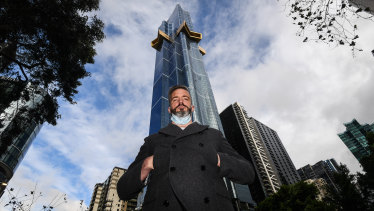 “The pressure on the industry was massive after [The Age] articles and still remains today,” said resilience consultant Jordan Bartlett. “It’s a smoking gun. This is a real issue.”

Manufacturing firm Rondo built a test site and subjected it to winds of more than 35 kilometres an hour, similar to those lashing Melbourne on Thursday, which caused “creaking noises and a loud crack”.

Through extensive laboratory testing, Rondo determined creaking and banging noises could be linked to incorrect installation techniques and defects in wall and ceiling design and construction, according to a report published this year.

A spokeswoman for UEM Sunrise, the developer for Aurora, said some residents had expressed concern about building noise related to recent extreme weather in Melbourne.

“[We] want to reassure them there are no issues regarding the stability or safety of the building,” she said. “Aurora Melbourne Central is the tallest building in the CBD and the complex engineering that supports tall buildings is in fact designed to sway in such high-wind conditions. This is an example of the building performing as it should.”