Human Rights Watch says the Chinese government is holding up to a million in ‘political education’ camps in the northwestern region of Xinjiang; State Department correspondent Rich Edson reports.

A Chinese official who was shown a video purportedly depicting Uighur Muslims being blindfolded and led into trains is insisting he does “not know” where the footage is from.

Liu Xiaoming, China’s ambassador to the U.K., was pressed by BBC host Andrew Marr to explain the clip during a television interview Sunday.

“Let's look at some very disturbing drone footage that’s been widely shared around the world. This is, almost certainly, over northern China, over Xinjiang. Can you tell us what is happening here?” Marr asked, while showing a video that surfaced in 2019.

After six seconds of silence, Liu says “I cannot see, uh, you know this view.”

“Can I ask you why people are kneeling, blindfolded, and shaven and being led to trains in modern China?” Marr continues. “What is going on there?”

“I do not know where you get this videotape,” Liu responded. “You know, sometimes you transfer prisoners in any country.”

WHO ARE THE UIGHURS, CHINA’S ISLAMIC MINORITY? 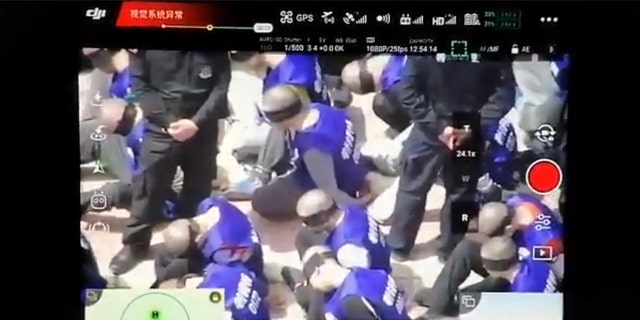 This screenshot purportedly shows hundreds of prisoners shackled and blindfolded who are believed to be from China’s minority Uighur Muslims, reports claim.
(War on Fear/ Twitter)

Marr then told Liu that the footage was “authenticated by Western intelligence agencies and by Australian experts, who say these are Uighur people being pushed onto trains and taken off.”

U.N. experts have said at least one million Uighurs and other Muslims are being held in detention centers in Xinjiang, according to Reuters. China, which initially denied the existence of the camps, labels them as training centers aimed to root out terrorism and extremism, as well as provide people with new skills. Those held are allegedly subjected to forced labor, forced abortion, sterilization, and other abuses.

But Liu called the persecution accusations “false” during the interview Sunday, arguing that the Xinjiang region’s population – where the minority is based – has doubled over the last four decades to around 11 million people.

Yet Marr, citing Chinese government data, countered that population growth among Uighur jurisdictions in that area has plunged 84 percent between 2015 to 2018.