Gravity-defying glass observation deck jutting out from China’s ‘horizontal skyscraper’ at 820ft high will welcome visitors (but would you dare to stand on it?)

A glass-bottomed observation deck which protrudes from an enormous enclosed sky bridge at 820 feet high will welcome visitors on Saturday in a Chinese city after more than six years of construction.

The vertigo-inducing platform is part of an impressive corridor which spans across the top of four towers and has been billed as a ‘horizontal skyscraper’.

Stretching 984 feet in length, the glass-walled corridor, called Crystal, is nearly as long as The Shard in London laid on its side. 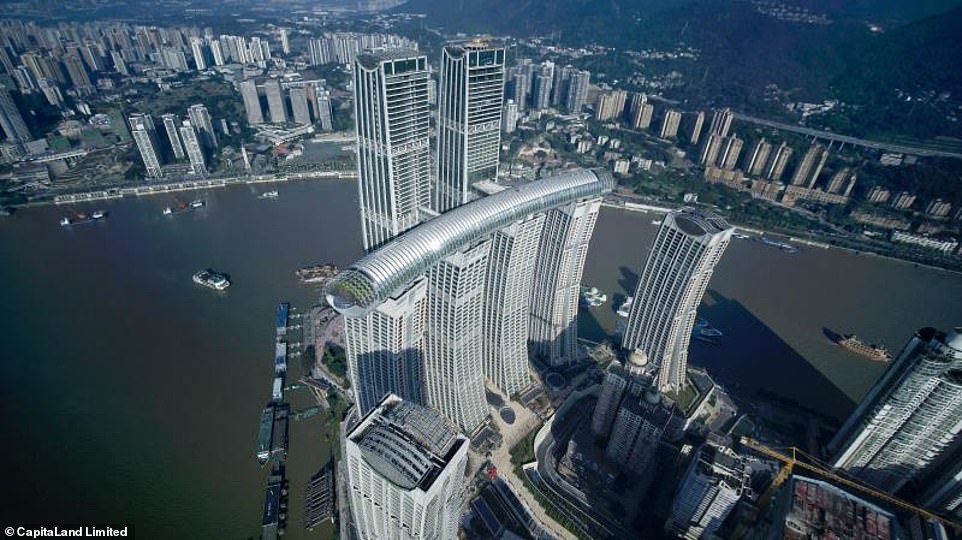 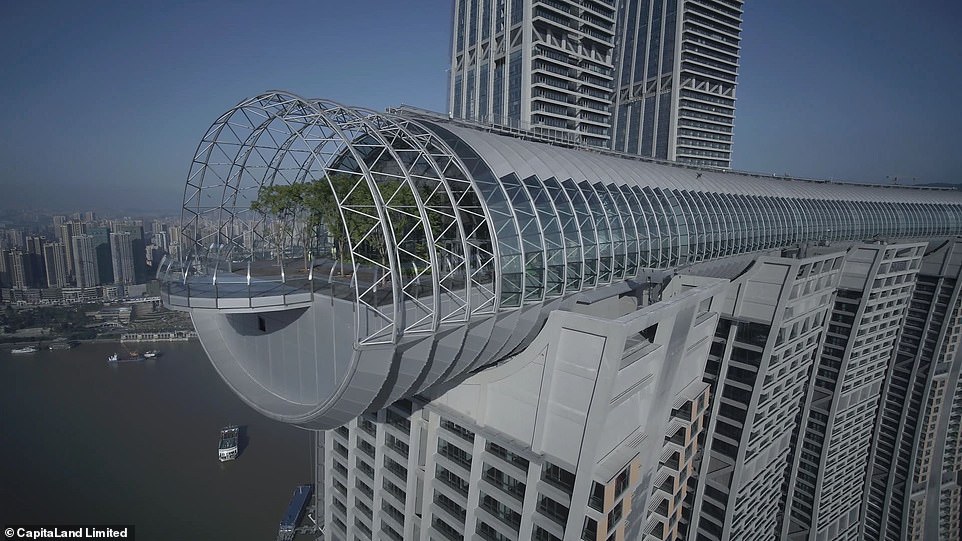 The observation deck, covering 16,145 square feet, consists of an indoor lounge and an outdoor see-through terrace.

Visitors will be able to enjoy the views of the Yangtze River and Jialing River merging at Chongqing’s Chaotianmen area, one of the oldest parts of bustling Chongqing.

The indoor part is themed after Mars, which echos China’s ambitious plan to explore the red planet as early as this July.

The entire corridor measures a whopping 107,000 square feet in size. It will also comprises a restaurant, two swimming pools and bars, which are due to open later this year.

The lofty passageway, 98 feet in width and 74 feet in height, is the crown jewel of an ambitious £2.7billion project that comprises eight skyscrapers: six at 820 feet tall and two at 1,148 feet tall. 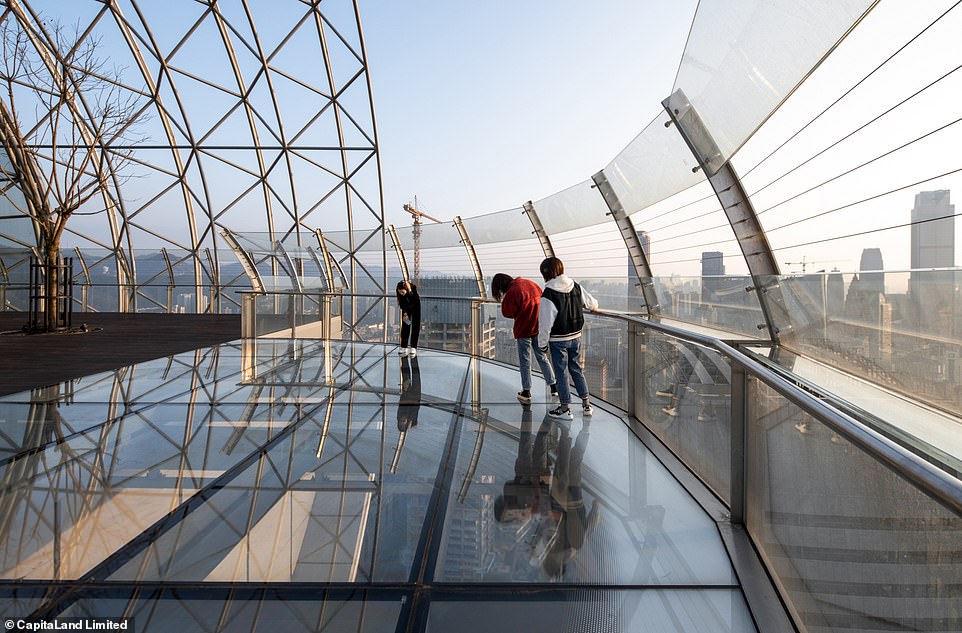 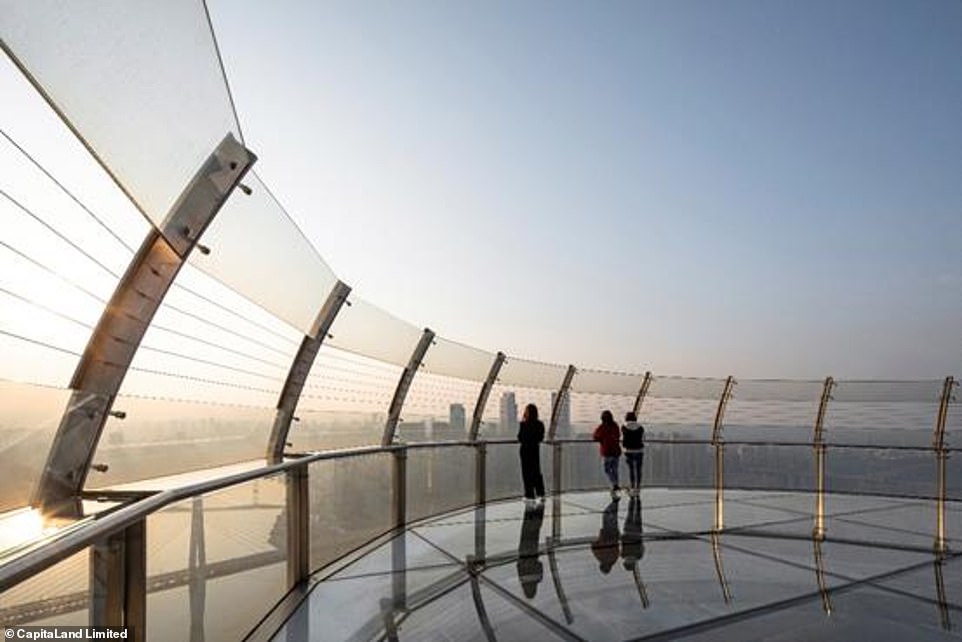 Apart from a super-size shopping centre which opened last September, the complex will also have 1.6million square feet of offices, 1,400 flats, a hotel and a major transport hub comprising ferry, subway and bus stations.

It has been described as ‘a vertically-built riverfront urban district’ by Lucas Loh, President of the China and Investment Management department at CapitaLand Group, a Singaporean real estate company that developed the property.

The eight-building complex, the size of 170 football fields, is designed by Canadian-Israeli architect Moshe Safdie, who is also the brain behind Singapore’s landmark Marina Bay Sands. 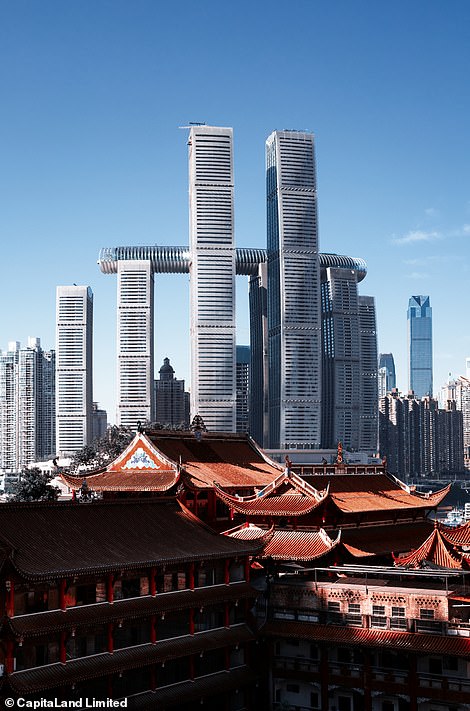 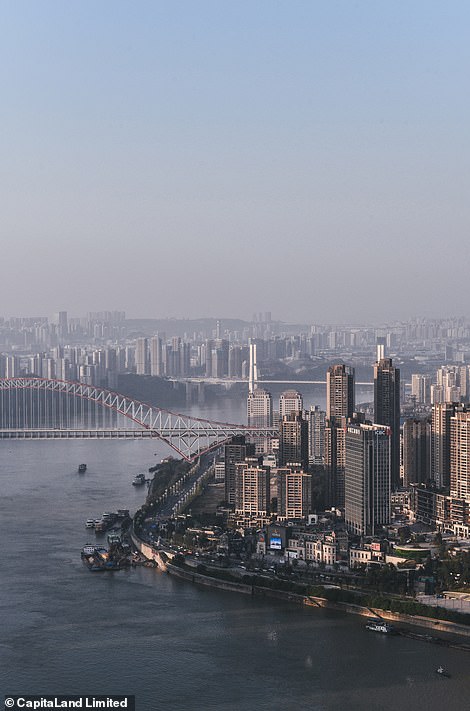 The lofty passageway, called Crystal, is the crown jewel of an ambitious £2.7billion project that comprises eight skyscrapers (left): six at 820 feet tall and two at 1,148 feet tall. The observation deck looks out to the urban jungle of Chongqing (right) 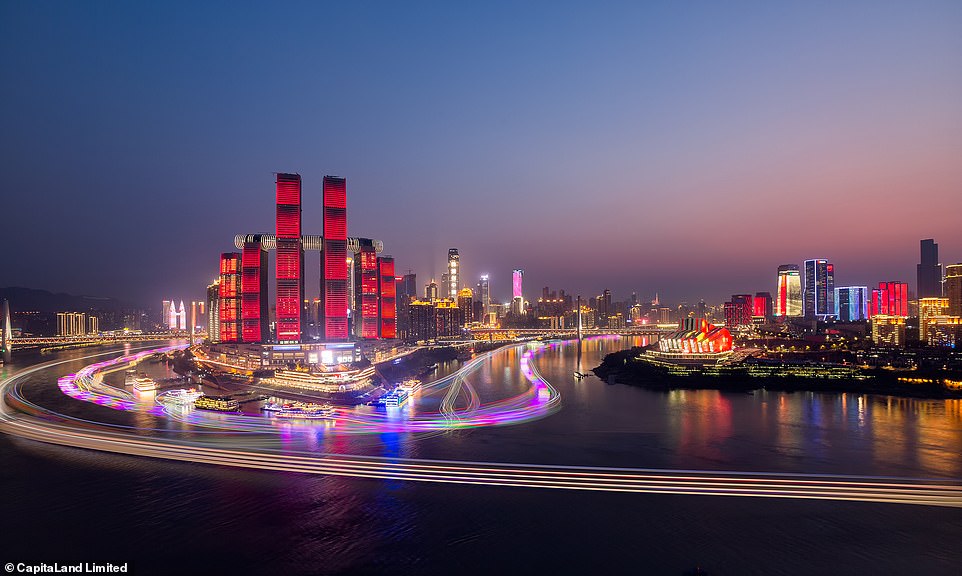 Apart from a super-size shopping centre which opened last September, the complex (seen in a light show last year) will also have 1.6million square feet of offices, 1,400 flats, a hotel and a major transport hub comprising ferry, subway and bus stations

To build such a massive structure on top of multiple skyscrapers is a complicated process.

According to CapitaLand, workers have constructed it in nine parts.

Four of them were built directly on top of the four buildings in the middle.

Three sections used to connect the buildings were constructed on the ground. They were then be hoisted up by hydraulic strand jacks and attached to the side of the towers to form a continuous passageway with four neighbouring parts.

The remaining two segments situated on both ends were built in short sections from the rightmost and leftmost towers. They connect the corridor to the two adjacent buildings via cantilever bridges.

Each of the three between-building sections weighs 1,100 tonnes.