Beijing/Wuhan: China on Saturday mourned the thousands of "martyrs" who have died in the new coronavirus outbreak, flying the national flag at half mast throughout the country and suspending all forms of entertainment.

The day of mourning coincided with the start of the annual Qingming tomb-sweeping festival, when millions of Chinese families pay respects to their ancestors. 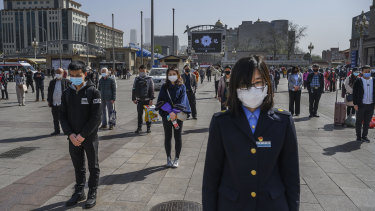 At 10am Beijing time, the country observed three-minutes of silence to mourn those who died, including frontline medical workers and doctors. Cars, trains and ships sounded their horns and air raid sirens wailed.

In Zhongnanhai, the seat of political power in Beijing, President Xi Jinping and other Chinese leaders paid silent tribute in front of the national flag, with white flowers pinned to their chest as a mark of mourning, state media reported.

More than 3,300 people in mainland China have died in the epidemic, which first surfaced in the central province of Hubei late last year, according to statistics published by the National Health Commission.

In Wuhan, the capital of Hubei province and the epicentre of the outbreak, all traffic lights in urban areas turned red at 10am and all road traffic ceased for three minutes.