London: He won many hearts with his mischievous antics during the Platinum Jubilee celebrations, but it appears that Prince Louis’s inability to sit still was fuelled by a little more than just boyish energy.

Mike Tindall, the Duke of Cambridge’s cousin, has revealed that the young prince had “complete sugar highs” during the pageant after consuming sweets behind the scenes. 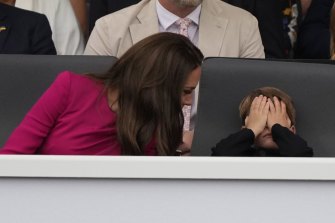 Kate, Duchess of Cambridge, left, and Prince Louis attend the Platinum Jubilee Pageant outside Buckingham Palace in London on Sunday.Credit:AP

Tindall also revealed that the Queen’s grandchildren and their families enjoyed a private lunch after Trooping the Colour, which he described as one of the highlights of the bank holiday weekend.

He also praised the monarch’s Paddington Bear sketch, hailing it as proof of her fantastic sense of humour.

Tindall, who was pictured jokingly warning a boisterous Prince Louis, four, that he was watching him during the pageant, spoke fondly about the celebrations on his podcast The Good, The Bad and The Rugby.

He was seated directly behind the Cambridges with his wife Zara, the Queen’s eldest granddaughter, and their children Mia, eight, Lena, three, and Lucas, one.

“Louis was just wanting to have fun, and my two [daughters] are always mischievous, so it was about trying to keep a lid on.,” Tindall said. 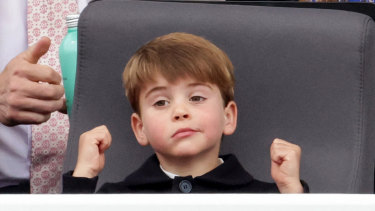 Prince Louis of Cambridge during the Platinum Pageant on June 05.Credit:Getty Images

“There were a lot of sweets out back, though, so they had complete sugar highs. It’s tough for them. They’re all young, so asking them to sit, because it was two till five or whatever, it’s a long time. As any parent knows, you just do whatever needs to be done.”

Prince Louis was the unexpected star of the jubilee weekend after waving excitedly from his carriage during Trooping the Colour, making an array of faces while the Red Arrows flew over Buckingham Palace and chatting animatedly with the Queen on the balcony.

As he took his seat in the Royal Box on The Mall on Sunday alongside his parents and siblings, Prince George, eight, and Princess Charlotte, seven, the youngster appeared to be in no mood to sit still. 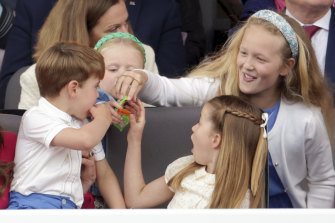 He gestured energetically throughout, putting his fingers in his ears, throwing a cushion around and constantly asking his mother questions, at one point clamping his hand over her mouth. After seemingly getting tired of his own seat, he decided to play musical chairs and went to sit with his grandfather, the Prince of Wales, for a while.

The Cambridges joked on Twitter: “We all had an incredible time, especially Louis.”

Tindall said there was a “a good cousin’s lunch on the Thursday”.

The Duke and Duchess of Sussex, who joined “the cousins” to watch Trooping the Colour from the Major General’s office overlooking Horse Guards Parade, are not thought to have joined the family lunch.

On the subject of the Queen’s surprise Paddington Bear skit, Tindall, a member of England’s 2003 Rugby World Cup-winning team, said: “She’s officially now a qualified actor, that was probably the best thing.

“She was bang on. I’ve always said she was funny, but she nailed it.”