A vigil will be held in San Jose, California, on Thursday to honor those killed in Wednesday morning’s mass shooting at a local transit facility.

“This is a moment for us to come together and grieve after today’s horrific tragedy,” Liccardo wrote on Twitter.

Authorities say an employee of the San Jose Valley Transportation Authority (VTA) opened fire at the light-rail facility Wednesday morning, killing at least nine people before taking his own life. Eight of the victims died in the gunfire while a ninth victim died hours later in a hospital, authorities said. 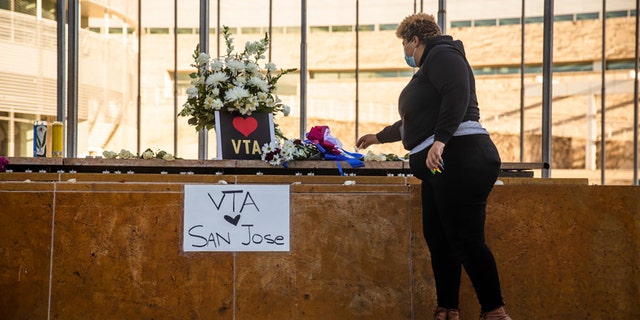 HERO Tent President Kiana Simmons places a candle at a vigil organized by her group following the mass shooting at the Valley Transportation Authority (VTA) light-rail yard, outside City Hall on May 26, 2021, in San Jose, California. (Getty Images)

On Wednesday evening, religious leaders and community organizers gathered at a park in downtown San Jose to memorialize the victims and offer prayers to their families. The gathering was organized by the nonprofit People Acting in Community Together (PACT), according to The Mercury News of San Jose.

It was one of two vigils that were quickly put together in the hours following the shooting. The other was held outside City Hall by Human Empowerment (through) Radical Optimism, or HERO Tent – a civil rights group.

“We need to recognize that we’re already in need of healing,” Montgomery added. “People are hurting right now, either directly or indirectly, and then when you encounter something as atrocious as this, how do you respond except that we must show up for people who can’t show up.”

President Joe Biden ordered the U.S. flag at the White House and other locations to be flown at half-staff until sunset on Sunday to honor the shooting victims, according to a White House statement.

“As a mark of respect for the victims of the senseless acts of violence perpetrated on May 26, 2021, in San Jose, California … I hereby order that the flag of the United States shall be flown at half-staff at the White House and upon all public buildings and grounds, at all military posts and naval stations, and on all naval vessels of the Federal Government in the District of Columbia and throughout the United States and its Territories and possessions,” he wrote.