‘We are finally starting to turn the corner’: Business leaders welcome easing of Covid curbs and end of WFH as boost for city centres – but unions urge caution about rushing back to offices and say axing mask rule is ‘premature’

Boris Johnson’s promise to scrap all Covid restrictions by the spring was welcomed by business leaders today, but unions warned against allowing a ‘free-for-all’.

The Prime Minister said that ‘from now’ No10’s work from home guidance will no longer apply, and face masks will no longer be required in school classrooms in England from tomorrow.

Covid passes and compulsory face masks will also be axed from next Thursday.

Mr Johnson told MPs at lunchtime the Government will still ‘suggest’ to people to wear face coverings in certain ‘enclosed or crowded places’ but ‘we will trust the judgement of the British people’.

He also said there will ‘soon come a time when we can remove the legal requirement to self-isolate altogether’, promising the change will be made by March 24 at the latest.

Ministers are confident they can lift the final restrictions because of the increasingly positive data, after UK Health Security Agency bosses logged 108,069 new positive tests today, down 16.6 per cent on last Wednesday’s 129,587. It was the fourteenth day cases were down week-on-week.

While some unions expressed concern, scrapping work from home and Covid passports in particular was warmly received by the British Chambers of Commerce.

The Prime Minister said that ‘from now’ No10’s work from home guidance will no longer apply, and face masks will no longer be required in school classrooms in England from tomorrow

The Prime Minister said that ‘from now’ No10’s work from home guidance will no longer apply.

Face masks will no longer be compulsory in secondary school classrooms. Mr Johnson confirmed masks also won’t be needed in communal areas like corridors over the coming weeks.

From next Thursday (January 27):

Covid passes that show proof of vaccination or a recent negative test will not be required to gain entry to venues and events.

Face masks will no longer be compulsory in any public spaces – including shops and public transport. But Sadiq Khan, the mayor of London, has confirmed that they will remain mandatory on Tfl services including the Tube, meaning passengers not wearing one can be turned away.

Restrictions on visits to care homes will be eased, which are due to be announced in the coming days.

Compulsory self-isolation for people who test positive for Covid will be scrapped. Mr Johnson said he could bring this rule change forward;

Other laws, like the requirement to give your address to NHS Test and Trace if you have Covid, could also go.

Director General Shevaun Haviland said: ‘News of the end of work from home guidance will be welcomed by business, particularly those based in city and town centres which rely on footfall from office workers.

‘The removal of the requirement for vaccine passports will also be positive for our members in the events sector and night-time economy.

‘With infection rates still high, many firms are experiencing significant staff absences and will be cautious about teams rushing back to the office when that could result in further absences.

‘As we move forward, businesses will now want to know what the Government’s longer-term contingency plans are to support firms should a new variant create a fresh wave of serious infections and require restrictions.

‘Confusion and loss of confidence was experienced at the onset of Plan B when no accompanying support was announced.

‘Although a financial package was subsequently provided by the Treasury, being clear on what support will accompany which restrictions ahead of time is the best way to maintain business confidence.

‘Maintenance of testing capacity must also be a priority for Government, with reports still reaching us of firms unable to access rapid testing at times when they need it.

‘This supply must remain consistent to maintain consumer confidence and avoid unnecessary absences.

‘As we move out of restrictions, Government must make positive interventions to power forward our economic recovery, by making strides on key issues such as growing our export base and levelling up local economies.’

Matthew Fell, the CBI’s chief policy director, said: ‘It’s great news that Plan B is coming to an end and businesses will be hopeful that we are finally starting to turn the corner on Covid-19.

‘There’s a vital need now for greater consistency in how we live with the virus in the longer term. Swinging back and forth between restrictions and normality has been damaging.

‘The Government must start to prioritise Covid infrastructure over interventions. That means relying more on free testing, vaccines and anti-virals.

‘There’s also still a job to be done on repairing confidence and demand. Omicron has pushed back the recovery for some key sectors, like international travel and hospitality. The focus now must be on how we can grow the economy and stimulate investment.’

Mr Fell said hybrid working would remain, as firms sought a balanced approach to home and office working, adding: ‘There are clear benefits to being in the office, such as collaboration and on-the-job learning, and blanket work-from-home guidance has had significant downsides for city centre trade in sectors such as hospitality and retail.’

Jace Tyrrell, Chief Executive of the New West End Company added: ‘With office employees set to return to London’s West End, retailers, bars and restaurants will be looking ahead to a promising year.

‘With the support of returning shoppers and Government alike, we are confident that the West End can achieve £7.5 billion of turnover this year as it continues on the long road to recovery.’

The Federation of Small Business also welcomed the move, though bosses warned it was not all good news, against a backdrop of higher taxes and business rates. 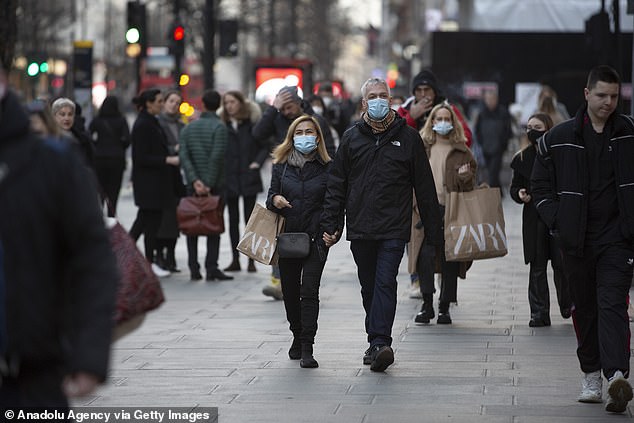 Free Covid lateral flow tests will be scrapped from July under the Government’s virus ‘exit strategy’, according to documents sent between the UK’s health agencies.

Ministers have urged Britons to take the swabs regularly in an attempt to quell the spread of Omicron — but only key workers will be able to access free tests if No10’s mooted plan to ‘ramp down the Universal Testing Offer’ gets signed off.

Instead, officials say an online ordering system will be ready by the end of June to direct Britons to purchase the tests, which are said to cost the Government £30 per pack of seven.

No10 has previously said it would ‘at a later stage’ stop offering everyone the tests, which are free to order from the Government website or pick up at pharmacies. No10 has spent billions of pounds on securing the kits as part of its mass-testing strategy.

Amid record high cases at the start of the year, more than 8million lateral flows were registered over the space of one week. However, only a fraction of tests used are officially logged.

But Covid infections have been in freefall for the past fortnight. The natural fizzling out of the Omicron wave has piled pressure on Boris Johnson to unveil his pandemic ‘exit strategy’ to prepare the country for living with Covid like flu.

National Chairman Mike Cherry said: ‘After two years of chopping and changing, small businesses right across England will be hoping that this marks the beginning of a final winding down of trading restrictions.

‘We would now urge everyone to get behind small firms – be that on a commute, whilst working from home, online, or in-person – as they work night and day to recover from another incredibly stressful festive season.

‘Equally, it’s important to respect the house rules that each individual small firm has implemented to keep its customers and staff safe – many have invested thousands in making premises more secure.

‘Small firms and sole traders stand ready to spur our economic recovery from this recession as they did the last.

‘After new import checks took effect this month, however, they are now staring down the barrel of a jobs tax hike, a dividend taxation increase and business rates bills landing in April.

‘The Government should be looking at policies that will empower small businesses and start-ups to get our economy firing on all cylinders again. In an environment where inflation is surging, and the labour market is exceptionally tight, hiking an indiscriminate tax on job creation is not one of them.’

However, unions in the health and education sectors in particular expressed concern at the speed at which restrictions were being lifted.

‘The latest ONS infection survey update shows 1 in 10 primary age pupils have Covid-19. While the trend amongst secondary aged children is down it is however uncertain, due to the short time schools have been back since the Christmas holidays, that this trend will continue.

‘Such uncertainty could lead to a pronounced risk of increased disruption with children and staff having to isolate.

‘We are concerned to see what the Covid-19 related absence is when figures are released next week.

‘The danger is we lift restrictions too quickly before the effects of returning to school are clear.

‘This will result in more education disruption which is extremely worrying particularly for pupils taking national exams this year whose education has been so badly disrupted already.

‘Rather than announcements aimed at saving Boris Johnson’s job, Government should be exercising a duty of care to the nation’s pupils and the staff who educate them.

‘This disruption is at the door of the Government who should have got ventilation and filtration solutions in place before Omicron as advised by SAGE and they should be getting these solutions in place urgently now to ensure ​interruption of education remains at the minimum.’ 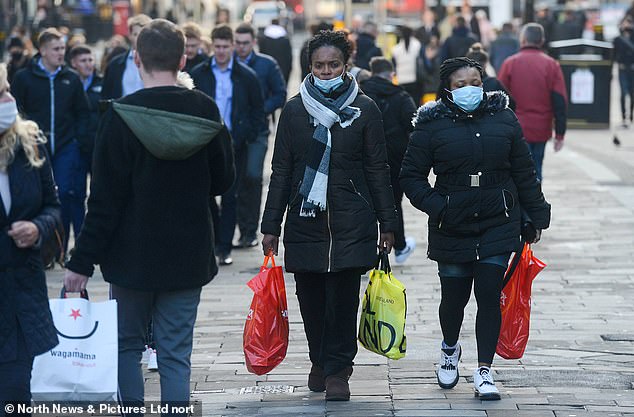 Members of the public pictured wearing masks on Northumberland Street, in Newcastle city centre, this afternoon after Boris Johnson’s announcement that Plan B resctrictions will be coming to an end next week

UNISON general secretary Christina McAnea added: ‘Everyone wants to put the pandemic behind them. But if safety measures are abandoned too early, in one fell swoop, the good progress ​made could be quickly undone.

‘The danger is people will think it’s all over when ​no one can be sure that’s true. New cases are no longer on the rise, but thousands are in hospital and many more are ​still being infected each day.

‘Rather than allowing a free-for-all, ministers should be urging caution and encouraging ​continued mask-wearing on transport, in public places and in schools, where it c​an still make a real difference.’

‘Employers must consult with staff and unions on working arrangements – including flexible working options, and bosses must carry out proper risk assessments and improve ventilation.

‘Face coverings have been proven to reduce the spread of Covid. Making them optional on public transport and in shops at this stage in the pandemic is premature and will put workers at risk.

‘Ministers must fix our broken sick pay system once and for all. The government is asking people to return to their workplaces but is offering them little or no financial support if they become ill.’

Paddy Lillis, leader of the shopworkers’ union Usdaw, added: ‘We are deeply concerned that the decision to again end mandatory face coverings in shops is more to do with saving the Prime Minister’s job than Covid safety.

‘It beggars belief that the Government chose to dismiss the concerns of our members and many workers who are desperately worried about restrictions being lifted while case numbers remain high.

‘The Government could have eased existing restrictions while maintaining safety measures in businesses that have been open throughout the pandemic, like supermarkets.

‘Face coverings, hand hygiene and social distancing had pretty much become the norm in retail, but constantly changing the rules is unhelpful.’