A BRITISH Airways jet crashed into another plane on a runway in Dubai.

The £220 million AirbusA350 was pushing back from a stand when it collided with an Emirates Boeing 777 that was parked behind it. 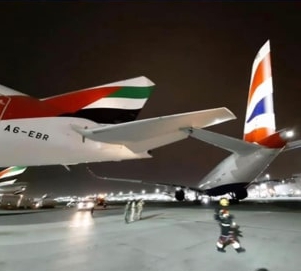 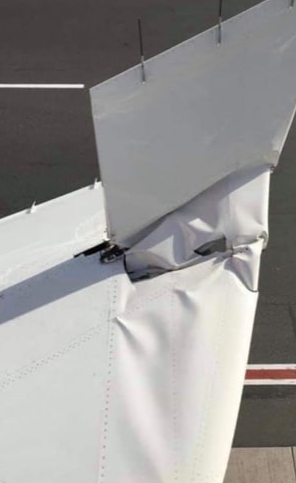 Witnesses watched horrified as the BA plane – registration G- XWBA -crunched into the tail fin of the Emirates gouging out a huge chunk from its horizontal elevator.

The six month old A350 – which was flying empty and with just cargo – was heading back to London's Heathrow from Dubai when the incident happened late on Monday night.

Within hours of the incident photos were posted on pilot forums with the hashtag Stay2metresapart while others joked To Fly To Collide referring to BA's slogan To Fly To Serve.

The A350 does have a tail camera but it points forward and so the crew would have been relying on the ground crew to guide them and a tug can clearly be seen at the front of the BA plane.

The Emirates jet was also taken out of service for a check while BA engineers were looking over the A350.

BA has only just taken delivery of the A350 with four in its fleet and another 14 on order and it is not the first incident involving that type of plane.

It is not the first incident involving one of the planes from the A350 fleet another G-XWBD – has been involved in four incidents in less than a year prompting suggestions of a jinx.

Before it was delivered last summer it struck a hanger at the factory in Toulouse and then three months ago it had a hard landing at Tel Aviv and was taken out of service.

Three weeks later the same plane had a hydraulic failure as it approached Toronto and suffered a small fire and then days later it had another brakes issue as it came into Heathrow.

A BA source said: ''We aren't having much luck with these new toys and they are supposed to be the prize of the fleet.

''Technically the pilots are trained to keep looking back during push back.''

Last night BA said an investigation had been launched and in a statement added: ''Safety is always our highest priority. The aircraft will be fully assessed before it is cleared to fly.''