Britain could buy only half of its target of F-35 Lightning II fighter jets and spend the extra cash on a futuristic plane that will control a swarm of drones.

The short take off and vertical landing jets will be deployed on the Royal Navy’s Queen Elizabeth-class carriers, reported The Times.

Military funding will instead be directed towards the UK-led Tempest jet – which is expected to make it into production by 2035. 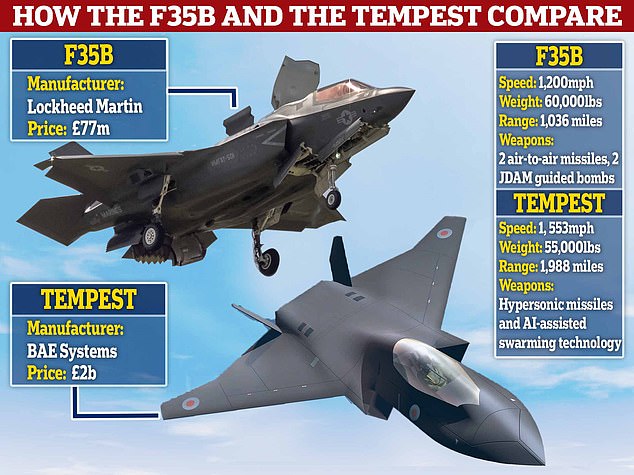 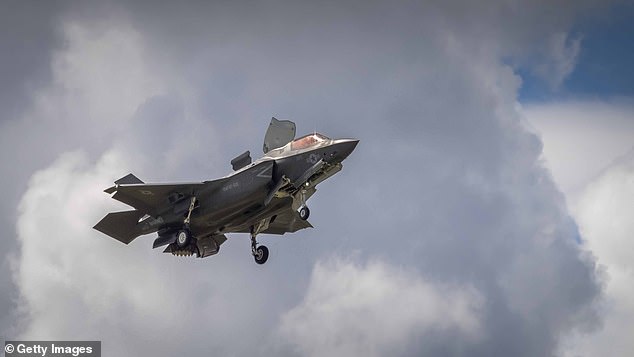 The short take off and vertical landing jets will be deployed on the Royal Navy’s Queen Elizabeth-class carriers, reported The Times. Pictured, an F-35

The next-generation fighter jets will be ‘optionally manned’, meaning they can operate without human pilots. And the jets are set to command a swarm of unmanned drones called ‘loyal wingmen’.

A 2015 UK defence review claimed military leaders hoped to buy 138 F-35 jets over the course of the US-led programmes’ lifespan.

But the Commons defence committee has since said the decision was taken ‘following some hesitation’ and Britain is not contractually obliged to buy any more than 48.

A foreign police, defence and security integrated review will finish in November.

A defence source told the newspaper: ‘The guiding principle of the review is to ask ourselves what the threat it, and whether we have the capability to meet it.’ 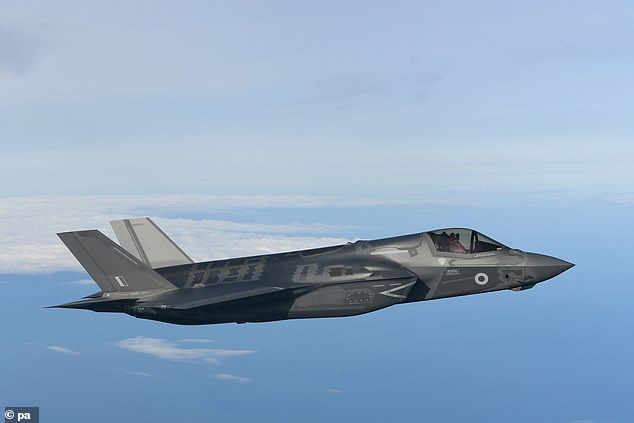 Military chiefs may decide on a final figure of 70 F-35s, which one expert said would ‘make sense’ because 60 could be in use while ten were kept back to act as back-ups in case of damage or malfunction.

Justin Bronk, a research fellow in combat air power at the Royal United Services Institute, added that the number was ‘on the lower end of expectations’.

He said the investment in Tempest might create more jobs in Britain, but the futuristic jets were unlikely to be as successful as the F-35s.

‘We can’t keep eroding out spectrum of capability in this way,’ he told the newspaper.

It comes two years after the then defence secretary Gavin Williamson said: ‘Tempest is going to be a future jet fighter that will take the RAF to an ever greater height.’

Asked if the UK could afford the jets, Mr Williamson replied: ‘If the RAF is to have the capability to keep Britain safe and make sure we can defeat our adversaries at home and abroad, we need to be making this investment in a fighter jet.

‘We have been a world leader in the combat air sector for a century, with an enviable array of skills and technology, and this Strategy makes clear that we are determined to make sure it stays that way.

‘It shows our allies that we are open to working together to protect the skies in an increasingly threatening future – and this concept model is just a glimpse into what the future could look like.’

By David Wilcock, Whitehall Correspondent for the Daily Mail and Joe Middleton for MailOnline

The British Army’s entire force of hundreds of tanks and armoured vehicles could be scrapped under sweeping modernisation plans.

The UK’s Challenger II main battle tanks and Warrior infantry fighting vehicles are said to be at risk because of swingeing budget cuts expected to follow the coronvirus crisis.

The cost of upgrading the heavy armour and a desire to switch military focus to modern threats like cyberwarfare could see the battlefield heavies put out to pasture, little more than 100 years after they were invented.

The Challenger II has been the UK’s main tank since the late 1990s, with cavalry regiments using it in Iraq. There are around 227 in service.

The Warrior, of which there are almost 400, has been in service since the 1980s.

Britain already sounding out Nato partners about giving up its heavy armour and focusing instead on aviation and cyber warfare, the Times reported.

A government source told the newspaper: ‘We know that a number of bold decisions need to be taken in order to properly protect British security and rebalance defence interests to meet the new threats we face.’

It comes after senior MPs demanded Boris Johnson’s chief aide Dominic Cummings submit to questioning about his involvement in a major review of the UK’s defence and security capabilities.

Labour’s shadow defence secretary John Healey said: ‘This Government has shown time and time again that it lacks the strategy and competence needed to maintain our national defences, with little to show from a decade in power other than a shortage of troops and an equipment funding black hole. 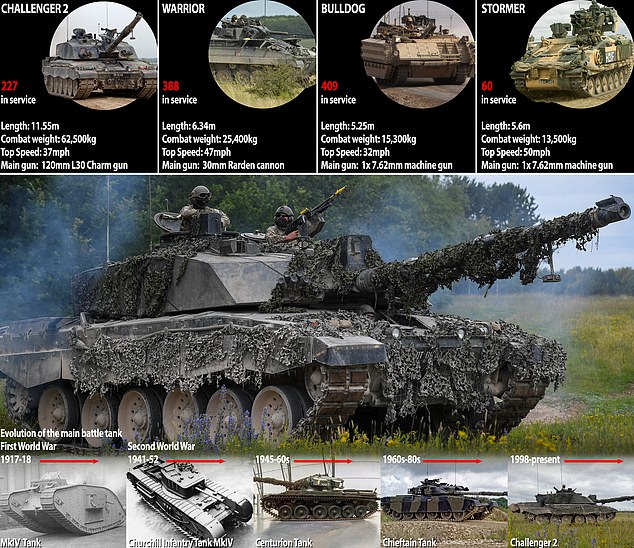 The evolution of Britain’s tanks in the bottom row. And in the top row, the  armoured vehicles still used by the armed forces in the UK

‘The Integrated Review comes at a time of national crisis and further cuts to the defence budget are likely. Having botched the last two Strategic Defence and Security Reviews and with the ship building strategy seemingly in tatters, this government’s track record fails to reassure that the national interest will be served in this review.

‘The Secretary of State must make a credible assessment of Britain’s defence requirements based on a full consultation with military chiefs and stakeholders. Britain simply cannot afford for ministers to pursue pet projects or repeat the past mistakes of knee-jerk cuts to defence assets.’

Tobias Ellwood, the Tory chairman of the Defence Select Committee, said Mr Cummings must not be allowed to drive a ‘coach and horses through our defence architecture’. 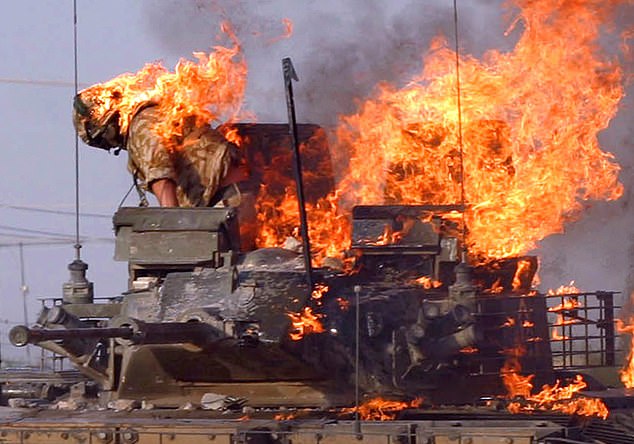 It emerged in July that Mr Cummings, Boris Johnson’s most senior aide, had been given the green light to tour classified sites including MI5, MI6 and the SAS headquarters ahead of the review.

Mr Cummings’ involvement in the review has prompted controversy in Whitehall with MPs having warned armed forces chiefs that they need to improve or face the prospect of the aide ‘sorting you out his own way’.

Tank-on-tank exchanges are rare in modern warfare, and the only time a Challenger 2 has been defeated by another tank on the battlefield was in a friendly fire incident in Iraq at the hands of another Challenger 2.

But it was in that conflict in 2003 that the Challenger 2 had its proudest moment.

A squadron of 14 tanks from the Royal Scots Dragoon Guards confronted a similar number of ageing Soviet-era  T55 tanks.

Last year then defence secretary Penny Mordaunt warned that the age of the Army’s armoured vehicles meant that the UK was falling behind other nations without an expensive investment programme.

In her first speech in her short stint int he role before being replaced by Ben Wallace, Ms Mordaunt said: ‘Challenger 2 has been in service without a major upgrade since 1998. During this time the US, Germany and Denmark have completed two major upgrades, whilst Russia has fielded five new variants with a sixth pending,’ she said.

‘Warrior is even more obsolete, and is 20 years older than those operated by our key allies. Since Warrior’s introduction in 1988 the United States and Germany have conducted four major upgrades and Russia has invested in three new variants,’ said Mordaunt.

The ongoing talks about the tanks are part of the government’s defence review which is set to conclude around November.

Steward McDonald, the SNP’s defence spokesman, tweeted: ‘The black hole in the equipment plan ain’t gonna close itself – you’d have to be pretty naive to believe this is purely a capability choice and not a financial one.’

One senior British defence source said: ‘We simply will not be viewed as a credible leading Nato nation if we cannot field close-combat capabilities. It places us behind countries such as France, Germany, Poland and Hungary.’

But General Sir Richard Barrons, former commander joint forces command, supports the modernisation of the forces and said the future is is ‘about manned/unmanned autonomous things.’ 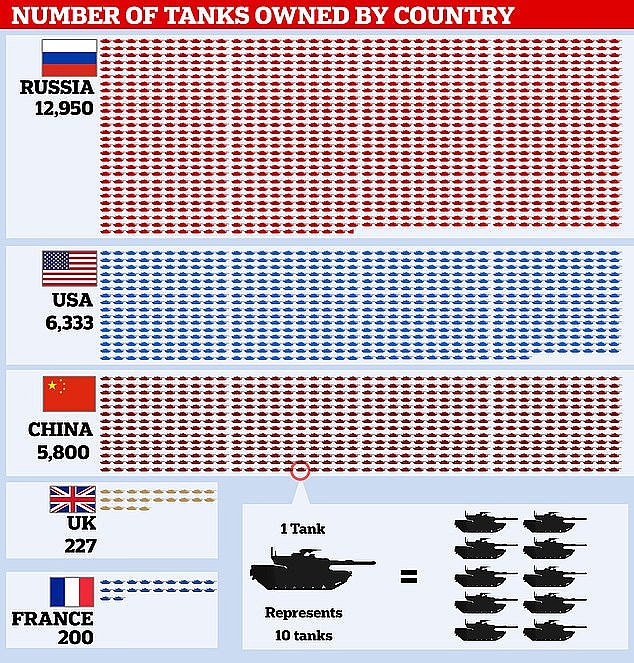 Graphic shows the number of tanks per country, according to data from the International Institute for Strategic Studies

Under the potential plans the Challenger 2 tanks would be placed in preservation, just in case they were needed in an emergency.

The tank was deployed in Bosnia and Kosovo during the NATO-led mission in former Yugoslavia in the late 1990s.

A spokesman for the Ministry of Defence said: ‘Our commitment to Nato is unwavering, and the UK recognises that as a global military power our greatest strength remains our alliances.

‘We are engaging our international allies and industry partners as we develop and shape defence’s contribution to the integrated review.’