The Andrews government has struck a deal with state MPs to continue Victoria’s state of emergency beyond September 14, as daily COVID-19 case numbers fell below 100 on Saturday for the first time in more than two months.

But Premier Daniel Andrews reported another 18 lives lost to the virus, taking the state’s toll to 514, as he urged Victorians to "find a way" to keep following lockdown rules and not be tempted into risky behaviour by the falling case numbers and sunny weather. 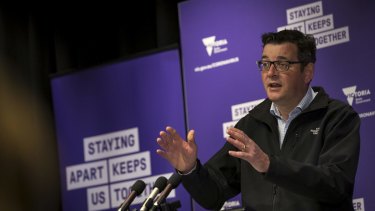 Police and military personnel were out in force on Saturday enforcing the COVID-19 restrictions as Melbourne enjoyed a day of late winter sunshine, with joint patrols at Melbourne seaside spots as well as beaches on the Surf Coast.

Cyclists were being stopped and questioned on the busy St Kilda Road in the city’s inner south as officers enforced the 5km limit rule.

Despite the continued positive trend in the daily case count, the Premier said it was still too early to go public on a roadmap out of lockdown or even say if the tough stage four restrictions will end as scheduled on September 14.

But Labor has found a way to break the Parliamentary impasse over its controversial bid to extend for another 12 months its power to declare states of emergency, which it has been using every four weeks throughout the pandemic.

A deal has been hammered out with crossbench MPs in the upper house, giving Mr Andrews’ government a one-off extension which will last six months, but not the permanent legislative change it was seeking, on condition that members of Parliament are briefed on the health situation each time a new four week state of emergency is declared.

The deal, which will force Labor to return to the Parliament in March if it still believes it needs emergency powers, is believed to be acceptable to at least four of the crossbench, giving Mr Andrews and his colleagues the numbers they need to narrowly pass the compromise arrangement through the chamber on Tuesday.

Key crossbencher Fiona Patten of the Reason Party said the agreement was a "fair and equitable" outcome and that it looked to have enough support to secure passage.

“I have indicated that I will vote for a one-off extension of the government’s state of emergency powers for six months,” Ms Patten said.

“However, I have requested that the legislation have a sunset clause on this time period, meaning that any future state of emergency will again be limited to six months."

Mr Andrews was quizzed on the roadmap out of stage four but was giving little away, saying the number of daily cases was still to high to be able to provide definitive answers.

“There will be a plan, it will be detailed, it will be based on science and data and evidence in the very best of medical advice,” Mr Andrews said.

The Premier acknowledged the community was fatigued by the lockdown and likely to be restless in the fine weather, but urged Victorians to stay the course in the fight against the virus.

“We are so close to driving this down to very low numbers and we have all just got to find a way to stay the course,” the Premier said.

But state Opposition leader Michael O’Brien said Victorians were entitled to answers about what would happen in the coming weeks.

“Victorians are frustrated, they’ve made so many sacrifices and they just want their lives back,” the Liberal Leader said.

“If the Premier has a plan, he owes it to us to tell us what it is, if he doesn’t have a plan, then he’s just not doing his job.”