A TEENAGER who allegedly coughed and spat on a 66-year-old woman before shouting "coronavirus" has been charged.

The boy, who is aged 14 and cannot be named for legal reasons, has been charged with one count of section 39 assault and will appear at Tameside Youth Court on Tuesday 7 April 2020. 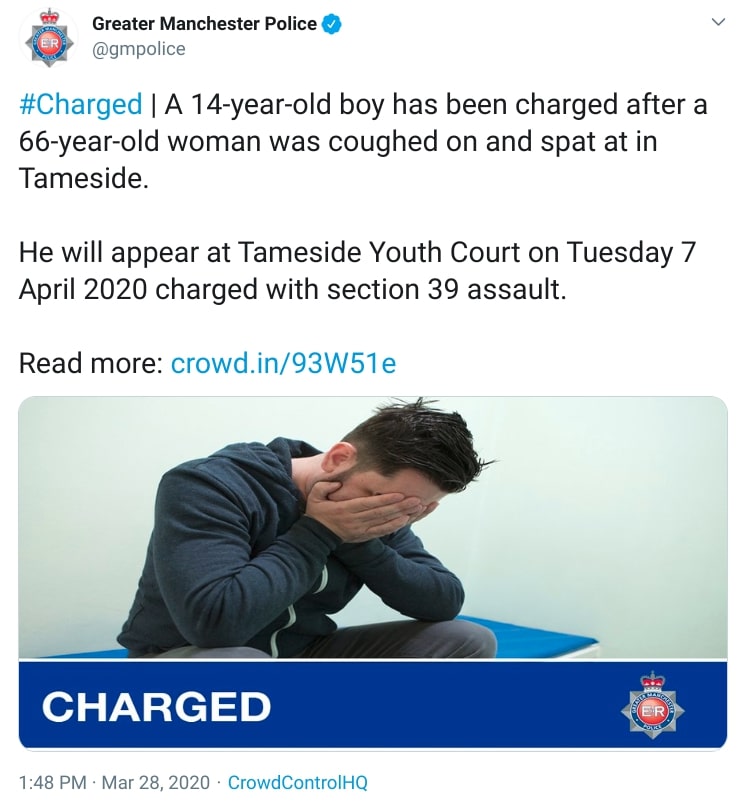 Officers were called shortly before 8.30pm on Tuesday 17 March to reports of a young boy spitting and coughing at a pensioner in the town centre of Ashton-under-Lyne in Manchester.

It is claimed the teen shouted "coronavirus" after the despicable attack.

A 14-year-old boy was later arrested on suspicion of section 39 assault.

The vile attack is just one in a spate of vile cough attacks amid the coronavirus pandemic.

Just yesterday another teenager was seen deliberately coughing in an Aberdeenshire care worker's face after flagging her down for help.

Cops say the incident happened around 1.40pm on Friday afternoon in Banchory.

The yob allegedly moved towards her when she stopped her car and coughed directly in her face.

Detectives said that he told her she would now get coronavirus.

Prosecutors have said anyone making threats of coronavirus infection will face serious criminal charges, after reports of police officers, shop workers and vulnerable people being deliberately coughed at by people claiming to have the disease.

The Crown Prosecution Service said such behaviour could constitute common assault, and attacks on emergency workers specifically, were punishable by up to two years in prison.

Max Hill QC, the director of public prosecutions, affirmed: "The CPS stands behind emergency and essential workers and will not hesitate to prosecute anybody who threatens them as they go about their vital duties.”