Boris Johnson has set out funding for 32 of the 40 ‘new’ NHS hospitals he promised in his 2019 manifesto.

The Prime Minister won headlines with his promise to voters last September that he would build ’40 new hospitals across England over the next decade’ if they handed his party its fourth election win in a row.

But it turned out many of the projects included refurbishments of existing hospitals, with only six trusts actually being rebuilt.

In an announcement today, Mr Johnson boasted he would be pumping £3.7billion into 32 trusts across England, with a further eight schemes invited to bid for future funding.

The premier said the coronavirus pandemic had brought into focus how important it was to ‘build back better’, one of Mr Johnson’s favourite new tripartite slogans.

But more than half of the projects are either rebuilds of existing hospitals, or building a hospital on the site of one that already exists. 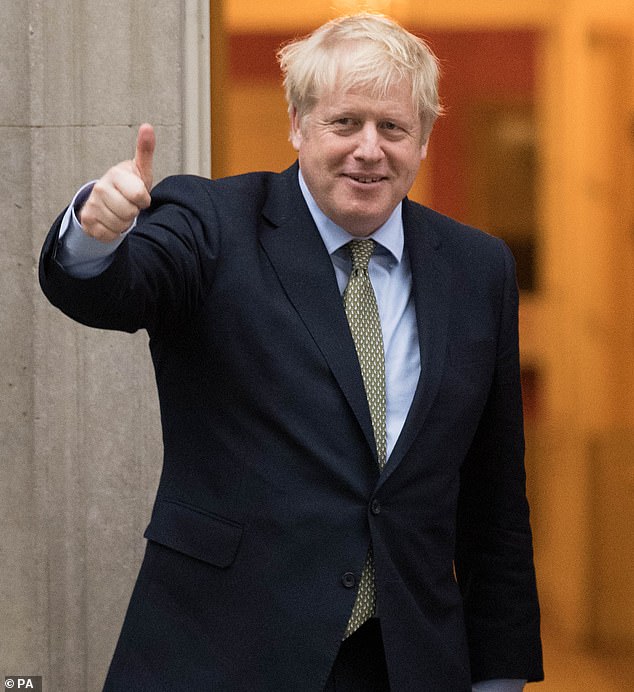 Boris Johnson has announced a £3.7billion drive to improve or rebuild 40 hospitals in England by 2030 following a decade of brutal Tory cuts to the health service

The NHS will be hit by a ‘triple whammy’ this winter, according to a report that warns the ‘road to recovery will be long’.

Health bosses say the system will be left creaking from a surge in Covid-19 patients, alongside a ‘huge’ backlog of delayed treatment, as well as ‘exhausted’ staff battling against reduced capacity due to infection control measures.

The NHS Confederation, which represents the majority of hospital trusts, ambulance services, clinical commissioning groups and other healthcare providers in the UK, warned demand has ‘outstripped’ supply and that many doctors and nurses are already ‘exhausted’ by the pressures of this year, with no respite in sight.

It called on the Government to ‘grasp the nettle’ and invest in a fully integrated health and care system.

Its survey of 252 NHS leaders revealed nine in ten felt they did not have enough funding to hit their performance targets – or even upgrade buildings, IT and other infrastructure to improve services.

They warned the pandemic has set the health service back ‘by years’ in their report – titled NHS Reset – and urged ministers to ‘lock in’ changes made in response to the crisis that cut out ‘needless bureaucracy’ and snipped red tape.

Hospital trusts were ordered to get services back to 90 per cent of capacity by mid-October, but with staff absences due to testing problems and mounting demands as a ‘double whammy’ of coronavirus and flu hits A&E departments, bosses fear the ambitious goal will not be met.

The NHS receives funding through its 2018-signed five-year plan – at £20.5billion annually – but hospital leaders warned this budget needs to be expanded to help the health services ‘play catch up’ on appointments missed due to lockdown.

Boris Johnson has pledged an extra £3billion to the NHS for winter, which has been earmarked for maintaining Nightingale hospitals and increasing testing capacity.

Mr Johnson said: ‘The dedication and tireless efforts of our nurses, doctors and all healthcare workers have kept the NHS open throughout this pandemic.

‘But no matter what this virus throws at us we are determined to build back better and deliver the biggest hospital building programme in a generation.

‘From Morpeth to Milton Keynes, we are building 40 new hospitals across England to level up our NHS so more people have top-class healthcare services in their local area.’

Health and Social Care Secretary, Matt Hancock, said: ‘We protected the NHS through the peak of coronavirus.

‘Today we recommit to protect the NHS for years to come with the 40 new hospitals we will build over the next decade.

‘I love the NHS and I will do all I can to make sure it is there for you and your family over the years to come.

‘The biggest hospital building programme in a generation will help protect the NHS long into the future.’

It comes as cancer checks, heart scans and blood tests are set to be carried out in hundreds of NHS ‘one stop shops’ on high streets across the country.

The diagnostic hubs will allow patients to have vital checks close to their home – while ensuring hospitals are left clear for serious care.

Empty shops in town centres and retail parks will be targeted for the scheme which will see 160 centres set up to deliver MRI and CT scans, X-rays, ultrasounds and blood tests.

This will allow doctors to quickly diagnose conditions such as cancer, heart disease, strokes and breathing problems. In time they could be also used for breast cancer screening, antenatal ultrasound scans, ear tests and eye tests.

Health bosses last night stressed the centres would be ‘Covid-free’, hopefully giving patients confidence they will be safe from the virus.

Officials are increasingly concerned that thousands of patients died during the first lockdown because they were afraid of going to hospital.

The toll is expected to grow in the coming years because cases of cancer, heart disease or diabetes that were not diagnosed will escalate until they are impossible to treat.

Figures published by Breast Cancer Now this week revealed nearly one million women had missed out on mammograms because screening programmes had been paused.

Professor Sir Mike Richards was commissioned by NHS boss Sir Simon Stevens to review diagnostic services. His report, presented to the NHS at a board meeting yesterday, said establishing these centres would be quicker and safer for patients.

Sir Mike, who was the first NHS national cancer director and the Care Quality Commission’s chief inspector of hospitals, said: ‘The pandemic has brought into sharper focus the need to overhaul the way our diagnostic services are delivered.

‘Not only will these changes make services more accessible and convenient for patients but they will help improve outcomes for patients with cancer and other serious conditions.’

His report also called for a major boost in staffing, with 2,000 radiologists and 4,000 radiographers needed, as well as other support staff.

Officials said the proposals would be implemented with some to be introduced with immediate effect and incorporated into the NHS post-pandemic ‘recovery plans’. Several testing hubs are set to be introduced in the coming weeks.

Miriam Deakin, director of policy and strategy at NHS Providers, which represents NHS trusts, said: ‘Doing these checks in the community rather than in hospital could support trusts as they grapple with a second wave of Covid-19, winter pressures and tackling backlogs of care.’ The wider plan will be implemented over the next five years.