Booster jabs for Covid variants will be fast-tracked and WON’T need huge clinical trials because scientists can use data from original vaccine studies, regulators rule

Booster jabs to tackle mutated coronavirus variants will be fast-tracked and won’t need to go through massive clinical trials, regulators have ruled.

Drug chiefs in the UK, Canada, Australia, Switzerland and Singapore have confirmed that scientists will be able to use data from original clinical trials in their applications.

Big vaccine-makers are already working on new versions of their Covid vaccines to tackle the South Africa and Brazil variants, which studies suggest may make the current jabs less effective than they were against earlier strains of the virus.

The first time around, the vaccines had to be trialled on tens of thousands of people for around six months and studies are still ongoing.

But for the boosters the same process won’t have to be followed as long as the firms are only making minor tweaks to their original vaccines.

Proof of effectiveness and safety will be transferable from the earlier studies, UK regulator MHRA said, although small studies for updated safety information will be required.

This process will be based on a system that allows flu vaccines to be easily updated each year so they can adapt to the different strains that circulate each season. 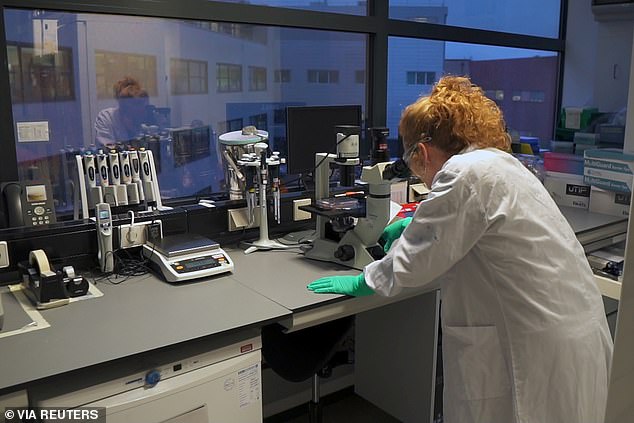 Vaccine-makers will not have to do massive clinical trials with tens of thousands of people to get Covid booster jabs approved, say regulators in the UK, Canada, Australia, Switzerland and Singapore (Pictured: A scientist in a Johnson & Johnson lab)

The MHRA assembled a team of several dozen scientists, clinicians and statisticians, led by two or three lead assessors.

They scrutinised the results of early laboratory work as well as clinical trials and the manufacturing process.

The MHRA said its teams ‘meticulously’ went over more than a 1,000 pages of data on the vaccine’s quality, efficacy and safety.

Once the experts were satisfied with the data, the body had to present its findings to Dr Raine, who gave the final stamp of approval.

The MHRA then approached the Commission on Human Medicines, an independent panel of experts.

The Commission assessed the data again before advising the government that it was safe and issuing the emergency license.

‘Our priority is to get effective vaccines to the public in as short a time as possible, without compromising on safety,’ said Christian Schneider, chief scientific officer at the MHRA.

‘Should any modifications to authorised Covid-19 vaccines be necessary, this regulatory approach should help to do just that.

‘The public should be confident that no vaccine would be approved unless the expected high standards of safety, quality and effectiveness are met.’

During a visit to Glasgow Lighthouse Lab, Health Secretary Matt Hancock said: ‘We will have a fast-track approach to safely approving future vaccines that work against a variant of Covid.

‘The vaccine programme has clearly been a huge UK success story, and part of the reason that we have been able to develop the vaccines so far so quickly is because of the MHRA’s rigorous yet flexible approach, which has been based entirely on looking as quickly as possible at the safety and efficacy of vaccines.

‘I’m delighted that they’re taking that same principled approach to the approval process for vaccines that may work against variants.’

The MHRA said the reason mass clinical trials are not necessary is that scientists can test how well a vaccine works on blood samples in a lab.

And because earlier versions of the vaccines have already gone through the entire process, they can see how this lab effectiveness translates to the real world.

Real-world data also proves that the vaccines the boosters are based on are safe and that they protect against coronavirus.

Any updates to vaccines should use almost exactly the same technology based on a slightly different version of the virus, to incorporate changes caused by mutations in the new variants.

All the current vaccines are based on the original coronavirus that emerged in Wuhan in 2019.

But the virus has mutated since then and lab studies suggest one big change – named E484K – has changed the virus in a way that helps it to evade immune cells that are only used to the older strains of the virus.

This makes reinfection more likely among people who have already had Covid, and makes vaccines slightly less effective.

AstraZeneca, Pfizer and Moderna, the makers of the three vaccines the MHRA has approved for use so far, have all said they are aiming to modify their jabs to cope with variants this year.

AstraZeneca, the maker of the Oxford vaccine, said it hopes its new vaccine will be ready by autumn.

She said: ‘Since December last year we have all been concerned about the appearance of variants – Kent, South Africa, more recently Brazil – and therefore we’re well-prepared to look at, when it’s needed, updates to ensure the vaccines being used in citizens are fully effective.

‘Our goal is to ensure the vaccine modifications in future that respond to the new variants can be available in the shortest possible time but without compromising in any way on safety, on quality and on effectiveness.

‘What I would emphasise at the outset is that we don’t have evidence at the moment that the vaccines in use in the UK are significantly lacking in effectiveness but we are now well-prepared.’