Secretary of State Antony Blinken will visit Ukraine next week in a show of ‘unwavering’ support after Russian troops amassed on its border, the State Department said Friday.

Russia in recent weeks deployed up to 100,000 troops near Ukraine’s northern and eastern borders as well as in Crimea, which Moscow seized in 2014, raising concerns of a major escalation.

But Moscow announced on April 23 that it had started withdrawing its forces, bringing at least momentary relief in Kiev and the NATO alliance.

Blinken’s visit Wednesday and Thursday is intended ‘to reaffirm unwavering US support for Ukraine’s sovereignty and territorial integrity in the face of Russia’s ongoing aggression,’ State Department spokesman Ned Price said in a statement. 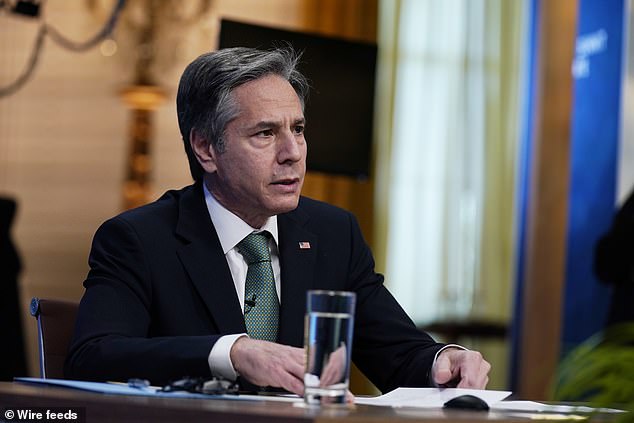 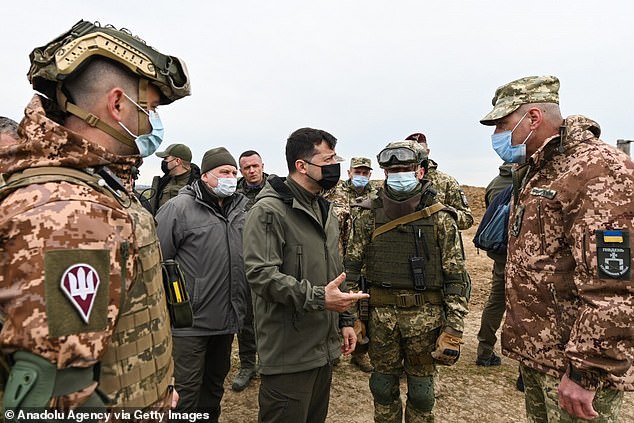 Blinken’s trip comes as President Joe Biden ramps up pressure on Russia but also prepares for a summit proposed with his counterpart Vladimir Putin in hopes of stabilizing the relationship.

‘This is the old-fashioned business of secretaries of state, going places to have photo-ops to say, yes, the United States is interested in you and supports the government in charge on various policy issues,’ said Yuval Weber, an expert on Russia and Eurasia at the Wilson Center’s Kennan Institute and Texas A&M’s Bush School of Government and Public Service in Washington.

Weber said that Russia’s recent show of force was intended to send a message to the new Biden administration — and will keep Ukraine on edge.

While Russia pulled back troops after its exercises, it left defense equipment in the border regions, in what Weber said was a clear parallel to Moscow’s preparations before its offensive with Georgia in 2008.

‘The troop buildup has been to some extent normalized, so the next time there is a troop buildup it will be a little less surprising,’ Weber said.

Russia has signaled ‘that we have great capabilities to do something in the future, and they can instill additional insecurity in the Ukrainian body politic and Ukrainian mind.’

Zelensky has pointed to the Russian troop movements to ask for a fast-track into NATO membership, a prospect opposed by Western Europeans concerned about Russia’s response and which has met a cool reception in Washington.

More than 13,000 people have died in Ukraine since 2014 in the only active fighting on European soil as Kiev battles pro-Russian separatists in the eastern Donetsk and Lugansk regions.

A ceasefire that took hold last July has been shredded, with clashes sharply increasing between Ukrainian forces and separatists since January.

Trump’s strong-arming of Zelensky to dig up dirt on Biden triggered his first impeachment and appears linked to an FBI raid Wednesday on the home of Trump’s former personal lawyer, New York’s ex-mayor, Rudy Giuliani.

The Biden administration has renewed pressure on Ukraine to root out corruption and improve governance.

On the eve of announcing the trip, the State Department criticized Ukraine for removing the head of state energy company Naftogaz, saying the shakeup showed ‘disregard for fair and transparent corporate governance practices.’ 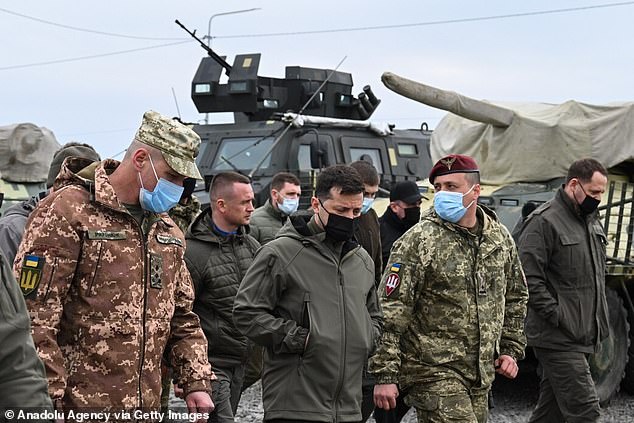 Russia in recent weeks deployed up to 100,000 troops near Ukraine’s northern and eastern borders – Ukrainian President Volodymyr Zelensky inspects at the southern frontline 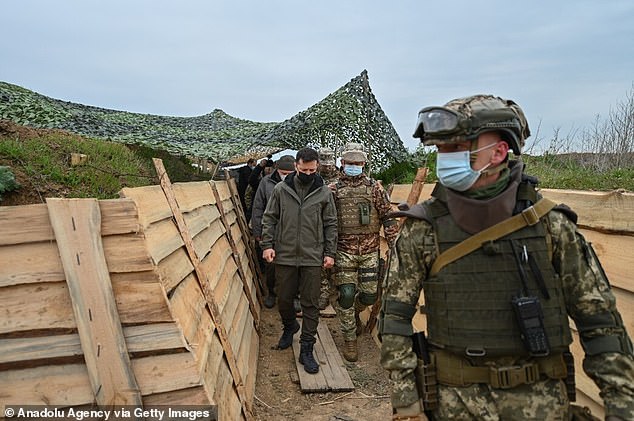 In addition to his meetings with Ukrainian President Volodymyr Zelensky, Secretary of State Blinken will be in London for meetings ahead of the G7

Blinken will be in Europe next week for critical talks on Russia, Ukraine, Iran, Afghanistan and frayed transatlantic ties that the Biden administration hopes to repair, the State Department said.

The department said Blinken will visit London starting on Monday for a meeting of foreign ministers of the Group of 7 industrialized democracies.

Blinken´s London trip is mainly designed to prepare Biden´s participation in a G7 leaders summit that Britain will host in June. But it´s also aimed at presenting a united front to address global challenges posed by China, climate change and the coronavirus pandemic.

The G7 meeting in London is being held against the backdrop of the Biden administration’s desire to restore close, cooperative ties with U.S. allies, notably on confronting China, Russia and climate change. Yet it also comes at a time of widespread unease about Biden’s decision to withdraw all American troops from Afghanistan by the 20th anniversary of the 9/11 terrorist attacks in September.

Blinken ‘is looking forward to discussing the democratic values that we share with our partners and allies within the G7,’ State Department spokesman Ned Price said in a statement. ‘The United States will discuss how we can work with other countries to address the key geopolitical issues we face as we build back better from this pandemic.’

After the G7 meetings on Monday and Tuesday, Blinken will visit Kyiv on Wednesday and Thursday.