A black man died of suffocation in Rochester, New York, after police officers who were taking him into custody put a hood over his head and then pressed his face into the pavement for two minutes, according to video and records released by his family and local activists.

The man, Daniel Prude, 41, died on March 30, seven days after his encounter with the police, after being removed from life support, his family said. 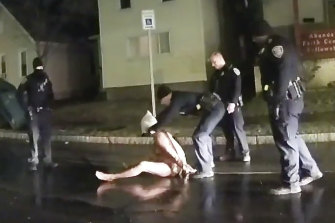 His death occurred two months before the killing in police custody of George Floyd in Minneapolis set off protests across the United States. But it attracted widespread attention only on Wednesday, local time, when his family held a news conference to highlight disturbing video footage of the encounter taken from body cameras that the police officers wore.

The New York state attorney general, Letitia James, and the Rochester police chief said they were investigating the death. The officers involved are still on the force.

Joe Prude, his brother, called 911 on March 23 after Daniel Prude, who was visiting from Chicago, ran out of his home in an erratic state. Prude had been taken to a hospital the previous day after he apparently began experiencing mental health problems, police reports show. 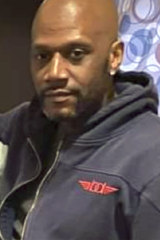 Daniel Prude died after his life support was switched off. Credit:AP

He was running through the street after leaving his brother's home before Rochester police officers detained him. A truck driver also called 911 before officers arrived, according to internal police investigations of the case, to say that a man wearing no clothes was trying to break into a car and saying that he had the coronavirus.

The video, first reported by the Democrat and Chronicle of Rochester, shows Prude, who has taken off his clothes, with his hands behind his back. He is standing on the pavement in handcuffs, shouting, before officers put a so-called spit hood on his head, apparently in an effort to prevent him from spitting on them. New York was in the early days of the coronavirus pandemic at the time.

After the hood is placed over Prude's head, he becomes more agitated. At one point, he shouts, "Give me that gun. Give me that gun," and three officers push him to the ground.

The video shows one officer placing both hands on Prude's head and holding him against the pavement, while another places a knee on his back, even as the hood remains on his head.

One officer repeatedly tells Prude to "stop spitting" and to "calm down."

After two minutes, Prude is no longer moving or speaking, and the same officer can be heard asking, "You good, man?"

The officer then notices that Prude had thrown up water onto the street.

A paramedic is called over, about five minutes after the officers placed the hood on Prude's head, to perform CPR on him before he is put into an ambulance.

The Monroe County medical examiner ruled Prude's death a homicide caused by "complications of asphyxia in the setting of physical restraint," according to an autopsy report.

"Excited delirium" and acute intoxication by phencyclidine, or the drug PCP, were contributing factors, the report said.

The body camera video was provided to Elliot Dolby-Shields, a lawyer for Prude's family, on August 20 through an open records request, and then released to the public on Wednesday after he and relatives reviewed the footage.

At the news conference on Wednesday, activists and members of Prude's family said the officers involved should be fired and charged with homicide, the Democrat and Chronicle reported. Joe Prude called the death a "cold-blooded murder".

"How many more brothers got to die for society to understand that this needs to stop," Joe Prude said.

At a separate news conference, Rochester's police chief, La'Ron D. Singletary, said he understood that people were angry about Prude's death and frustrated about the lack of action in the matter, as well as about the delay in releasing the video.

"I know that there is a rhetoric that is out there that this is a cover-up," Singletary said. "This is not a cover-up."

Later on Wednesday, more than 100 protesters gathered for hours in downtown Rochester outside a police station and marched to the street where Prude had been detained. The demonstration grew tense at times. Police officers, some of whom wore masks with Thin Blue Line flags, shot what appeared to be tear gas or pepper spray at protesters as they stood in a line across from them.

James said in a statement that a unit in her office dedicated to investigating deaths in which the police are involved had already opened an inquiry.

"The death of Daniel Prude was a tragedy," James said, adding that "as with every investigation, we will follow the facts of this case and ensure a complete and thorough examination of all relevant parties".

In an interview late on Wednesday, Dolby-Shields called the case a "huge misuse of force," and questioned why officers took "such a long time" to call for CPR.

He also disagreed with the decision not to suspend the officers involved.

Rochester's mayor, Lovely Warren, speaking at the same news conference as the police chief, said she was "very disturbed" by what the video showed.

"This is not something that's in our wheelhouse, in our control at this moment in time," Warren said, an apparent reference to the attorney general's inquiry. "And had it been, for me this would be something that we would've talked about months ago."

Governor Andrew Cuomo said late on Wednesday that he had not yet seen the video, but had been briefed on it.

"The way it was described is very disturbing," said the Governor, who asked James to investigate the death, via an executive order, in July.

Cuomo said he did not want to comment on the status of James' investigation, but "people should know that it is under investigation and has been for months".