Washington: US President Joe Biden has taken executive action to protect access to women’s health services amid growing frustration over his response to abortion rights being wound back in America.

Two weeks after the Supreme Court overturned Roe v Wade – removing the constitutional right to terminate a pregnancy in the US – Biden has used his presidential powers to try to mitigate some of the devastating consequences of the decision. 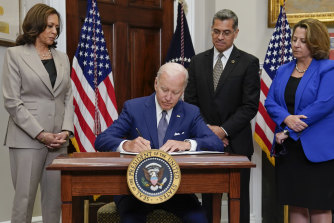 An executive order signed by the president on Friday (US time) will formalise instructions to the Department of Justice and the Department of Health and Human Services on protecting women’s access to reproductive health services where possible, including expanding access to abortion pills, contraception and family planning services.

Under the order, the federal government will also convene pro bono lawyers and public interest organisations to legally represent patients who want to travel across state lines to get an abortion, as well as the health providers who continue to offer services.

The administration will also aim to protect the privacy of patients seeking information about abortion services amid fears that they could be digitally tracked and penalised by states where abortions are now banned.

And the executive order will also increase outreach and public education to help Americans get reliable and accurate information about their rights and access to care.

Speaking at the White House on Friday (US time), Biden described the court’s decision as “terrible”, “extreme” and “totally wrong”.

“What we’re witnessing wasn’t a constitutional judgment – it was an exercise in raw political power,” he said. “A number of these states have laws that are so extreme they’ve raised the threat of criminal penalties for doctors and healthcare providers. They’re so extreme that many don’t allow for exceptions for rape or incest.

“This isn’t some imagined horror, it’s already happening. Just last week it was reported that a 10-year-old girl was a rape victim in Ohio. 10 years old! And she was forced to have to travel out of state to Indiana to seek to terminate the pregnancy and maybe save her life … Does anyone believe that a 10-year-old girl should be forced to give birth to a rapists’ child?”

The executive order comes after days of growing frustration among Democrats and pro-choice advocates that the White House has not done enough to mitigate the consequences of the court’s ruling, despite knowing as early as May – when a draft was leaked to Politico – that Roe v Wade was likely to be overturned. 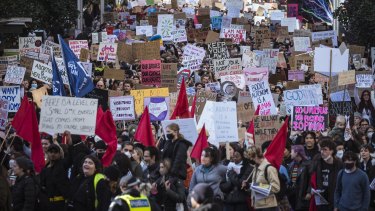 The US Supreme Court’s decision on abortion has had ramifications across the world, including Melbourne where thousands marched in solidarity last week.Credit:Chris Hopkins

Until now, much of Biden’s response has centred on urging Congress to codify abortion rights, even if it means tweaking the Senate’s so-called filibuster rules, although the Democrats do not have the numbers to do this.

He has also urged voters to turn out in force for the midterm elections in November to elect more pro-choice politicians and expand the Democrats wafer-thin majority in Congress, which will enable abortion rights to be codified in the future.

Biden repeated this call again today, saying: “I don’t think the court, or for that matter, Republicans who for decades have pushed this extreme agenda have a clue about the power of American women, but they’re about to find out in my view.

“It’s my hope and strong belief that women will in fact turnout in record numbers to reclaim the rights of taken from them by the court.”

But progressive Democrats, advocates and state governors have been urging Biden for more, such as using federal land to set up abortion clinics, or declare a public health emergency to protect women in need of care. So far, the White House has been reluctant to do so, arguing such moves could raise too many legal complications or be challenged in the courts by opposing states.

Frustrations are set to spill over in Washington on Saturday when pro-choice advocates march to the White House to demand that the administration do more. Similar rallies will be taking place over the weekend across the US, including in states such as Texas, Colorado, New York and Ohio.

The 1973 landmark ruling Roe v Wade enshrined a women’s choice to have abortion as a constitutional right, but its demise has allowed anti-abortion states such as Oklahoma, Alabama, and South Dakota to initiate “trigger laws” that will ban terminations in almost every circumstance.

Mississippi this week became the latest state to invoke its trigger laws on Thursday, forcing the closure of the abortion clinic at the centre of the Supreme Court’s decision: the Jackson Women’s Health Organisation.

The clinic, known locally as the Pink House, was the only abortion clinic in Mississippi, America’s poorest state, and its closure means that women who need healthcare will now have to travel thousands of kilometres to find a state where abortion remains legal.

“So much more is at risk,” he said. “We cannot allow an out of control Supreme Court working in conjunction with extremist elements of the Republican Party to take away freedoms and our personal autonomy.”