David Chipman, President Biden’s pick to run the Bureau of Alcohol, Tobacco, Firearms and Explosives, has made a series of controversial and partisan statements on social media over the years related to gun ownership and his experience in the law enforcement agency.

Chipman, a gun-control advocate who was tapped by the commander-in-chief Thursday to oversee the agency that plays a major role in regulating guns, has a private Twitter account, so his tweets could not be accessed.

His Facebook and LinkedIn accounts, however, were wide open.

Chipman offered a few startling hot takes in 2019, one of which has already begun sparking outrage in light of his ATF appointment.

The gun-control advocate, who once worked as a case agent in the Branch Davidian trial, answered questions on Reddit as part of an “Ask Me Anything” forum in September 2019.

During that forum, he falsely claimed, without noting his time as a case agent for the trial, that Branch Davidian sect members had shot down two helicopters during the Waco Massacre.

“At Waco, cult members used 2 .50 caliber Barretts to shoot down two Texas Air National Guard helicopters,” he wrote in an answer, “It is true we are fortunate they are not used in crime more often.

While it is largely understood that Branch Davidian members shot at the helicopters, the vessels themselves did not go down.

Most notably, no Barretts were recovered at the scene of the massacre.

“Although all of the three helicopters sustained damage from weapons fire, none of the National Guard crews or ATF aboard were injured,” a 1996 House report conducted in tandem by the Oversight and Judiciary Committees found.

Four ATF agents and 82 Branch Davidians died during the 51-day standoff, which began in late February 1993, when law enforcement and the Waco, Tx.-based religious cult engaged in a standoff as authorities tried to seize illegal weapons they believed the group was stockpiling.

The massacre ended after the FBI launched a tear gas attack, during which the compound caught on fire. Only nine members of the group survived.

Branch Davidian members maintain that it was law enforcement that began the shooting that led to the situation escalating as it did. Authorities, meanwhile, have always maintained the opposite.

Chipman was corrected during the Reddit AMA by other users, but opted not to edit or correct his statement.

His comments were still on Reddit as of Thursday.

Asked in that same AMA about distrust of the government after Waco, Chipman replied that, “I worked for the government for 25 years and I understand how trust in government has been harmed. Please remember, however, that it was agents on the ground who let the public know the truth about these incidents when some sought to cover-up inconvenient truths.”

On his Facebook in August 2019, Chipman offered his second hard-line opinion while sharing a commercial for an AR-15, slamming it as appealing to individuals who could commit mass shootings.

“When you advertise your rifle as being capable of unleashing an ‘orchestra of metal and hellfire,’ your marketing appears to target mass shooters. See the promo ad for the AR-15 used in Dayton….made in Kentucky,” he wrote in a blurb above the video.

The senior policy advisor to Giffords, a major gun-control organization run by ex-Rep. Gabby Giffords (D-Ariz.), who was gravely wounded in a mass shooting in 2011, posted a link on his Facebook to a video from the group on the dangers of ghost guns in May of last year.

In response, a user who did not appear to be friends with Chipman commented on the link one month later, criticizing his characterization of an AR-15 as an assault weapon.

Chipman, a professional, responded to the man, “Well hello gun troll. Jealous racists are getting all the attention?”

At the time, the issue of racism in America was top-of-mind in the wake of the murder of George Floyd, an unarmed black man killed in the custody of a white police officer at the end of May.

Chipman’s comment to the “troll” was still up as of Thursday afternoon.

In April of 2020, the gun-control advocate shared a link on his Facebook to a CNN article titled, “FBI sees spike in gun sale background checks amid coronavirus pandemic.”

Along with the article, Chipman wrote that he was “[t]rying to get the word out” to those who purchased firearms amid a spike in crime at the start of the pandemic.

“If you are one of the Americans who bought their first gun in March and think absent a day of training you’re ready for the Zombie apocalypse you’re not,” he wrote, “If you give me a couple rolls of the toilet paper you’re hoarding I’ll take care of the Zombies on this block.”

That post was also still up as of Thursday.

Less than a week earlier, Chipman linked to an Axios report titled “Liberty University students to return to campus amid coronavirus outbreak.”

His seemingly witty caption idea was to write, “Wow. Perhaps this makes the case that it is a cult.”

Chipman did not share his opinions exclusively on Facebook, also offering some of his thoughts on LinkedIn regarding guns.

“Investigate all illegal gunfire as a potential homicide,” he wrote in a 2016 LinkedIn post, “Once we do this we can turn the tide on gun crime.”

“We spend so much to defend our nation yet care so little about other Americans,” he wrote in a 2014 post, calling gun violence “[t]he [c]ivil [r]ights challenge of this generation.” 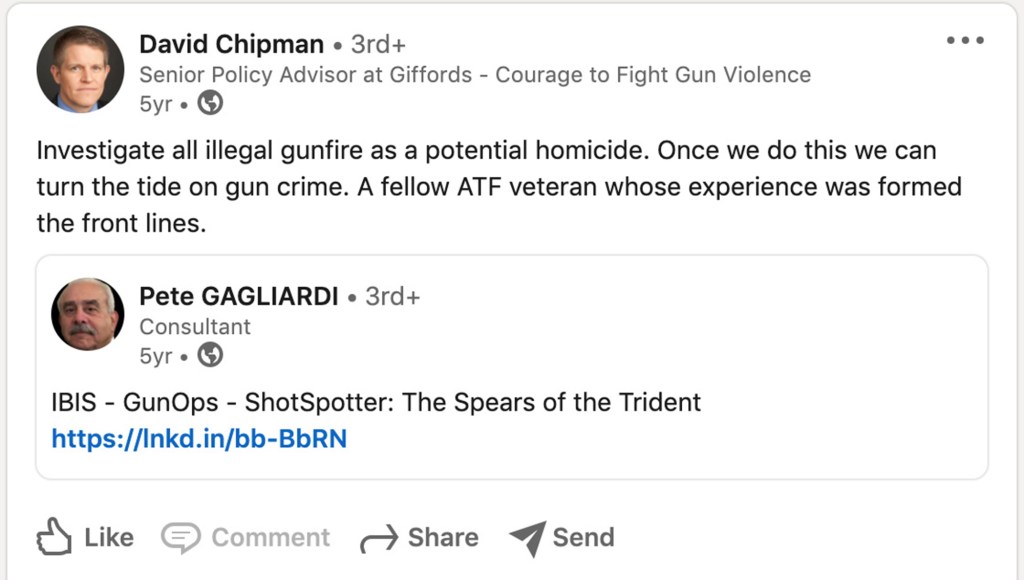