President Alexander Lukashenko of Belarus will seek the backing of Russia’s Vladimir Putin at a crucial meeting on Monday after a fifth consecutive weekend of huge protests demanding that he step down.

Lukashenko, facing the gravest crisis of his 26 years in power, will travel to Russia’s Black Sea resort of Sochi with his fate in Putin’s hands.

Economic and military support from Moscow could help tip the balance in his favour as his security forces crack down hard on the opposition.

The key meeting comes as the UN rights chief on Monday decried hundreds of allegations of torture in the crackdown on protests in Belarus, calling for investigations into all reports of ill-treatment, and for perpetrators to be tried.

‘Given their scale and number, all allegations of torture and other forms of ill-treatment by the security forces should be documented and investigated, with a view to bringing the perpetrators to justice,’ Michelle Bachelet told the opening of the UN Human Rights Council’s 45th session in Geneva. 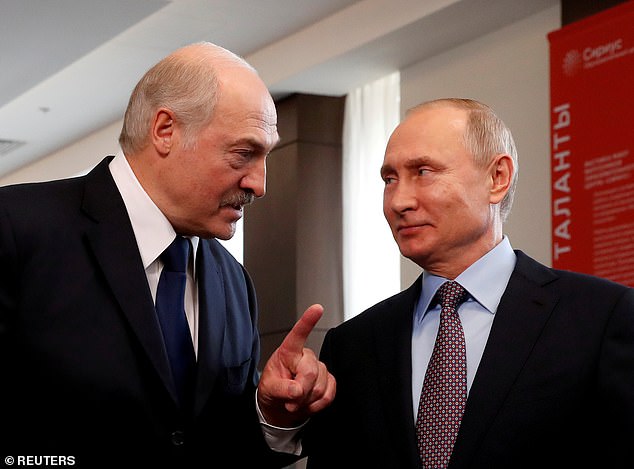 President Alexander Lukashenko of Belarus will seek the backing of Russia’s Vladimir Putin at a crucial meeting on Monday. Above, file image of Putin and Lukashenko pictured together

The Belarusian opposition accuses Lukashenko of rigging last month’s presidential election, which he says he won fairly with 80% of the vote. Since then, thousands of people have been arrested and nearly all the opposition’s key leaders have been detained, deported or forced to flee the country.

At least 100,000 protesters took to the streets of the capital Minsk on Sunday, taunting Lukashenko with chants of ‘You’re a rat’. Police said they detained over 400 people.

Putin’s actions so far suggest he has no desire to see the leader of a neighbouring ex-Soviet country toppled by pressure from the streets – even if Lukashenko has often proved a prickly and difficult ally. 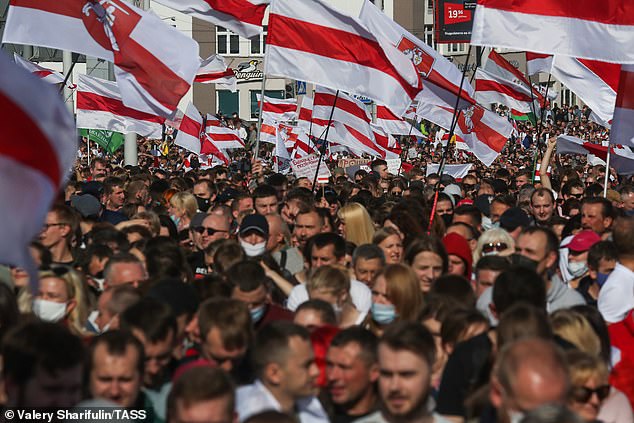 elarusian opposition supporters take part in a rally on September 13. At least 100,000 protesters took to the streets of the capital Minsk on Sunday, taunting Lukashenko with chants of ‘You’re a rat’

The Kremlin leader said last month he had set up a ‘reserve police force’ at Lukashenko’s request, but it would be deployed only if needed. On Monday Russia will send paratroopers to Belarus for joint ‘Slavic brotherhood’ military drills until Sept. 25, RIA news agency quoted the defence ministry as saying.

Russia has also offered to restructure Belarusian debt and support the banking system.

The cost of further Moscow backing could be Lukashenko’s acceptance of even greater Russian dominance in the relationship between the two countries.

The Kremlin has long pushed for closer political and economic integration with Minsk, including a joint currency, but Lukashenko has resisted the pressure from his more powerful neighbour. 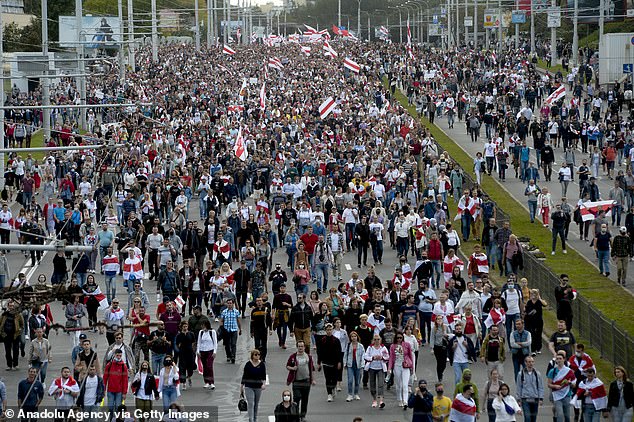 Yet the veteran Belarusian leader’s position could become increasingly precarious should the protests persist, and grow.

Sunday’s demonstration was one of the biggest yet.

‘We have to show with this march that he doesn’t control the country, that he is not in a position to speak on behalf of Belarusians,’ said Gennady, 35, a logistics worker who declined to give his last name.