The apocalyptic scenes created by the massive wildfires in Oregon are just the beginning, officials have warned, as they continue to battle the crippling infernos that have killed at least 10 people in the state.

The fires began swallowing up large swaths of land on Sept. 7 and now a thick yellow smog hovers over much of the burning West.

However, those fighting the flames amid severe wind conditions in Oregon are handicapped on the air front, as six Chinooks helicopters and 60 soldiers from the state's National Guard were deployed to Afghanistan in May.

The new F-model CH-47 Chinook helicopters – equipped with water buckets and used to fight crippling forest infernos – were sent to the long-running battleground as part of the potential Afghanistan drawdown mission. 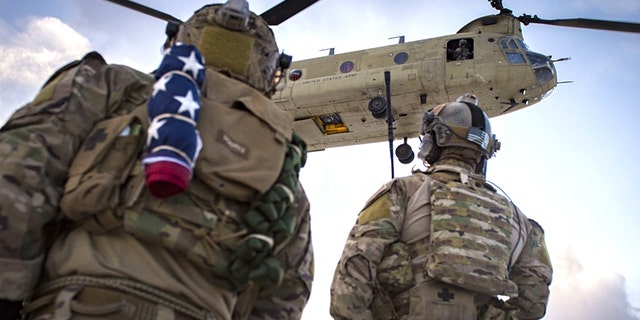 "Chinooks are important for their heavy lift capabilities as they can carry equipment from one location to another efficiently," Lt. Col. Joe Mendel stated at the time, explaining they would be used to resupply areas around Afghanistan.

These helicopters bestow unique capabilities in extinguishing wildfires, given that they carry large Bambi buckets capable of holding 2,000 gallons of water, totaling 18,000 pounds of water that can cover more than 300 feet of forest, an analysis by Vice found. 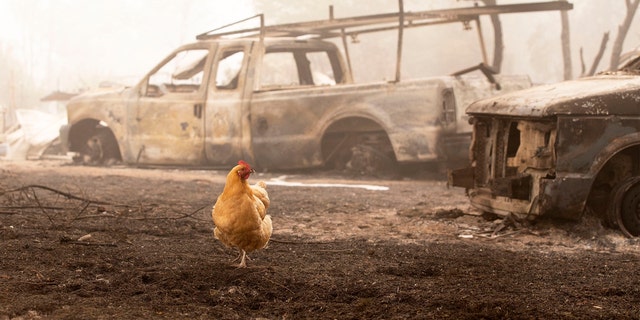 The Oregon National Guard defended its decision to send the Chinooks ahead of fire season, pointing out that they are only a small part of the tools used to fight fires and that the decision to send them to Afghanistan would have been made as part of the All Hazards Conference Planning, taking into consideration all resources needed to respond to disasters on the home front.

Maj. Stephen Bomar, the public affairs spokesperson for the Oregon National Guard, confirmed to Fox News that the Chinooks remain in Afghanistan and there are no immediate plans for them to return to the United States – and insisted that the Guard is well prepared to aid the state’s quest to quash the blazes.

"Although the Chinooks have been deployed, the Oregon Department of Forestry is currently at capacity with more than 40 overall aviation assets. We have been utilizing Blackhawk helicopters to assist in firefighting efforts since Oregon Governor Kate Brown declared a state of emergency due to heightened wildfire weather conditions on August 19," Bomar said. "We now have eight Blackhawks available, six dedicated to Bambi bucket water drop operations, and two available for search and rescue. We also currently have two UH-72 Lakotas assisting officials with fire mapping to keep track of the fires."

He also pointed out that, as of Sunday evening, all aircraft statewide was grounded "due to weather and smoke for safety," but as the weather shifts, "all aviation will be back up to assist from the air."

Black Hawks, while faster, are significantly smaller thus can carry less in terms of water loads – 600 gallons compared to a Chinook's 2,000, and 10 individuals contrasted to 44. The Lakota functions primarily for search and rescue. 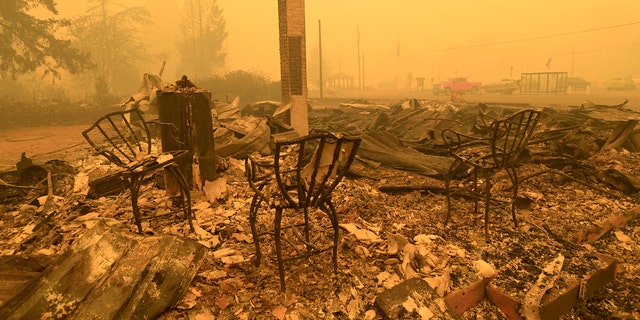 Three chairs are all that remain at the Gates Post office in Gates, Ore., Wednesday Sept 9, 2020.
(Mark Ylen/Albany Democrat-Herald via AP)

Nonetheless, others see the Chinooks' relocation as a vital launchpad for a broader discussion on what matters most.

"Firefighting is a useful mission, whereas the war in Afghanistan is a useless mission today. The fact that the helicopters could be fighting fires at home is just an unusually stark reminder that the forces and funds used in Afghanistan," contended Benjamin Friedman, the Policy Director at Defense Priorities. "Like other wars, always comes at the expense of some other use, usually a military one, but not necessarily."

Attila Hertelendy, an expert in biomedicine and emergency and disaster management, said it “probably wasn’t effective planning” to commit all of the Oregon National Guard’s Chinook helicopters to Afghanistan.

“It is a major disaster that we have in the Western United States currently due to the wildfire, yet every single asset and resource makes a difference," Hertelendy stressed. "It may not seem like a significant issue, but when people are literally dying, and the air quality makes it difficult to breathe, assets not committed to the fight can make a meaningful difference."

WILDFIRES ON WEST COAST LEAVE AT LEAST 35 DEAD, EVACUEES DESCRIBE HAVING 'LOST EVERYTHING'

Other state officials pointed out that while Oregon's Chinook fleet was ceremoniously sent to the hot zone some 7,000 miles away, Salem – the state capital – can lodge a formal request to the military for the assistance of both personnel and equipment from other U.S. states if deemed necessary. 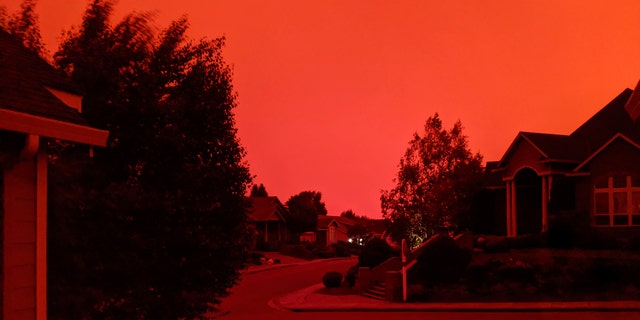 This photo taken from the home of Russ Casler in Salem, Ore., shows the smoke-darkened sky well before sunset, around 5 p.m., Tuesday, Sept. 8, 2020.
(Russ Casler via AP)

On Friday, requests were made for both active duty Army and out-of-state Guard units to help Oregon. As it stands, a total of 375 Oregon National Guard members, who were red card wildfire trained to help firefighting efforts earlier this summer, are assisting on the ground as well.

"In addition, we are supporting with an additional 120 Guard members across six counties, with more than 25 separate traffic control points to assist the citizens of Oregon," Bomar noted.

Two days earlier, Gov. Kate Brown said that she intended to train the needed teams – but the National Guard Bureau had initially suggested it did not have the required finances to do so, prompting a further appeal by Merkley, according to his office.

"Governor Brown is doing everything she can to ensure that our heroic firefighters working around the clock to save lives and homes have the tools, resources, and support they need. We're working collaboratively to throw everything we can at this crisis, bringing together local, state, and federal capacity," Charles Boyle, deputy communications director for Brown, told Fox News.

Boyle underscored that along with the Oregon National Guard members on the ground to support our firefighting teams, Brown has made a formal request for federal aid, including additional firefighting support, search and rescue and assistance for temporary housing.

"We have also requested the help of a DOD battalion of active duty military trained in firefighting," Boyle continued.

Meanwhile, the impact of the unprecedented fire season is only worsening, as almost 100 major blazes choke rural and forested chunks of land across the Western front – of which many parts are yet to even reach the peak of their wildfire season.