A young woman who allegedly incited an altercation that led to a tradie being stabbed to death in Melbourne’s south-east last year has been released on bail.

Cam Smith, 26, was killed after he was allegedly stabbed in the chest with an edged weapon by Jack Ledlin, 20, during an altercation near the Seaford train station about 6.55pm on November 25 last year. 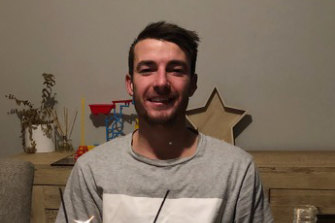 Cam Smith, 26, died after he was stabbed near Seaford train station on November 25.

Police allege Mr Ledlin and Scarlett Taylor, 21, berated and abused Mr Smith and his girlfriend as they walked past. They say Ms Taylor threw a glass bottle at the other woman’s feet, while Mr Ledlin and two other males set upon Mr Smith.

Ms Taylor was granted bail in the weeks after the stabbing, but that was revoked three days later when her mother contacted police to report her daughter was breaching her bail conditions by staying at another house.

She applied for bail again and it was granted on Thursday by deputy chief magistrate Susan Wakeling in Melbourne Magistrates Court, despite concerns from the prosecution that Ms Taylor may have helped Mr Ledlin dispose of an alleged murder weapon, which has never been found.

Police and prosecutors were concerned Ms Taylor posed an unacceptable risk of offending if released, would not abide by bail conditions and could try to intimidate or contact Mr Smith’s girlfriend through associates.

On Thursday, Ms Wakeling said she had taken into account that the offending was connected to a “most serious incident” and that the bail application must be considered in the light of the tragic outcome of Mr Smith’s death.

However, she noted that Ms Taylor was not charged with an offence in relation to the death, but rather her role in allegedly inciting a confrontation.

She said that there was a risk that Ms Taylor would spend more time on remand than the sentence she would receive for the charges she faced.

This was exacerbated by the fact that police had made an application for the charges to be heard in a higher court, where delays are significantly greater.

“This is the most significant matter in my assessment at this stage in determining compelling reasons [to grant bail],” she said.

She noted Ms Taylor’s compliance with bail had been poor in the past, her history of drug abuse and complex mental health issues.

But she said the young woman had been taking medication while in prison to address her mental health issues and had available accommodation with her half-sister.

Ms Wakeling said Ms Taylor would be subject to supervision by the Court Integrated Services Program (CISP), which is obligated to report any non-compliance to the court.

“In all those circumstances, I am not satisfied by the evidence that the risks associated with release of the applicant, subject to strict conditions and oversight by CISP, are not acceptable and I will grant the application for bail.”

Ms Taylor must live with her half-sister, cannot contact the witnesses for the prosecution or the co-accused, and has a night curfew during which she must present at the door when requested by police.

Liam Andrew Casley, 18, and a 17-year-old boy who cannot be named were also charged with affray after they allegedly assaulted Mr Smith and kicked him while he was on the ground bleeding.