Australian senior school students tend to have a strong belief in their abilities and feel supported by their teachers, which will help them persevere through adverse events such as disrupted schooling and the coronavirus pandemic.

Data gathered from the 2018 Program for International Student Assessment (PISA) suggests the Class of 2020 had strong foundations to deal with the year's setbacks, which have included cancelled co-curricular activities and end-of-year milestones, as well as prolonged periods of remote learning. 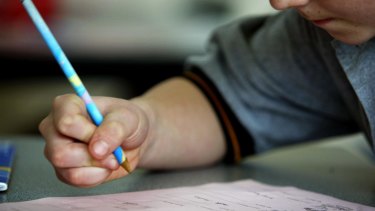 But it reveals that high levels of self-efficacy – defined as a belief in one's own ability – skewed more towards male students, those in private school systems and either overseas-born or first-generation students.

PISA national project manager and the report's co-author, Sue Thomson, said the 15-year-old students who sat PISA tests in 2018 would be in their final years of high school now.

"They're probably going to have the same sort of relationships with teachers and their schools, and positive beliefs about themselves, that they had at 15. These are stable sorts of characteristics," she said.

Data shows 93 per cent of those students believed they usually managed through difficulty "one way or another", and 86 per cent thought they could usually find their way out of a hard situation.

"About two-thirds think that their belief in themselves gets them through hard times," Dr Thomson said. "Of course it's not for all students. There's about one-third that don’t think they can handle things."

Parents and teachers have been increasingly worried about the welfare of senior students this year. Calls from young people to mental health support services in Victoria have jumped by up to a third during the state's hard lockdown, while in NSW schools have noticed increasing anxiety, misbehaviour and conflict.

But before the pandemic, Victorian students were reporting similar levels of self-efficacy to students in NSW, Queensland and South Australia, and greater self-efficacy than those from other states and territories. "It is still a positive message," Dr Thomson said.

Daisy Turnbull, the wellbeing director at St Catherine's School in Waverley in Sydney's east, said students who were well-rounded and involved in co-curricular programs had been able to bounce back quickly from the year's challenges and gain perspective on events outside the school.

"Self-efficacy is incredibly important for student wellbeing and we try to focus on their own ability to shape their lives and the mood of those around," she said.

She said students had been developing resilience by focusing on what they could control, their own habits and routines, and by placing their own experiences in the context of a global pandemic.

But she said connection had been the most important factor in maintaining student wellbeing and resilience this year. "For that reason, teacher support has been critical," Ms Turnbull said.

The PISA survey revealed 79 per cent of students thought their teachers showed an interest in everyone's learning, and 81 per cent said teachers gave them extra help when they needed it.

Australian students also reported higher levels of teacher enthusiasm than the OECD average. More than 80 per cent said it was clear teachers showed enjoyment in teaching or lesson topics, and more than three-quarters thought it was clear their teachers liked teaching the class.

Dr Thomson said that factor would have propelled students through this year. "Teachers clearly place a priority on providing a high level of support to their students, and this becomes even more crucial during these times of disrupted and remote learning," she said.

"We just hope that the level of support does continue so that kids can continue to thrive."

Raisa Rafi, a year 12 student at Alpha Omega Senior College in Auburn, in Sydney's west, said she and her peers had developed greater resilience, confidence and respect for each other with the support of their teachers. "Without my year group, teachers and mentor, I don't know where I would be," she said.

"In year 11, my year group was notorious in school for being immature and having several students who weren't willing to take things seriously."

But after lockdown that all changed.

"We [usually had] weekly grade meetings. However, these meetings were beginning to be led by the students who would always fall under the radar and sit at the back of the class and never ask questions," Raisa said.

"These students started feeling comfortable enough to stand in front of the grade and talk about their personal issues, and what was even more shocking was that no one ever acted immaturely about what was being said … our respect for one another grew."