Singapore: Eleven weeks after he was detained by Myanmar’s new junta, the whereabouts of Australian economist Sean Turnell have finally been revealed.

An adviser to Aung San Suu Kyi, the overthrown civilian leader of the troubled south-east Asian nation, Turnell has been held by security forces while they have waged a bloody crackdown that has claimed 745 lives. 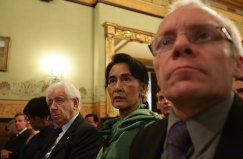 It had been unknown whether he was in prison or one of the military’s many compounds but now, more than 2 1/2 months since he was taken into custody, a student leader released from detention has disclosed where he has been.

Ko Zeyar Lwin, who was released on April 17, said he had spoken to Turnell and several ministers from the deposed government while he was inside the infamous colonial-era Insein Prison, built by the British in 1887 in Yangon.

“I had a chance to meet with economic adviser Professor Sean Turnell,” he said in an interview with the BBC Burmese service.

“He is in long block four [of the prison] and he is in good health.” 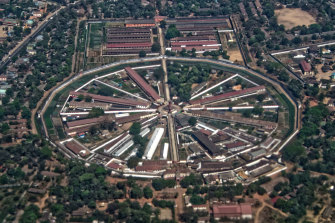 He said the prominent people he had spoken to in the jail had had to endure a “military investigation camp”, which had caused them psychological distress, although he did not specifically mention Turnell in connection to that.

While Turnell’s wife, Sydney economics lecturer Ha Vu, has been able to talk to him on the phone at least once, it’s the first testimony of another detainee about the Australian’s wellbeing in Myanmar.

A friend of Turnell’s, Bo Kyi, the co-founder of the Assistance Association for Political Prisoners which has been cataloguing those killed and arrested, said last month that members of his organisation had gone to the prison but had not been able to determine if the Australian was there.

No shortage of other political prisoners have been locked up inside Insein – pronounced as “insane” – during decades of mostly military rule since the former Burma’s independence in 1948. Among them include Suu Kyi herself under a previous junta, and many of the 3371 people who have been arrested since the February 1coup.

Suu Kyi has herself been under house arrest since the coup.

There has been no formal announcement of charges against Turnell, a world-leading expert on Myanmar’s financial system, which has been crushed in the chaos that has ensued since the military reclaimed power from Suu Kyi’s democratically elected government.

However, Suu Kyi’s lawyer Khin Maung Zaw said on April 1 that Turnell, Suu Kyi and three senior figures from the ousted government had been charged with violations of Myanmar’s official secrets act, under a section that carries jail sentences of three years and more.

Turnell had also been accused by state-owned media of trying to flee the country in the days after the coup with secret government financial information, a claim dismissed by his friends and associates.

The junta announced last weekend it was releasing more than 23,000 prisoners including 137 foreigners and among them was Australian publisher Ross Dunkley, who had been jailed at Insein Prison since being convicted on drugs charges in 2019.

While he was released to the Australian embassy in Yangon while a flight out of the country was arranged, Australian government officials have had no luck convincing the military to let Turnell go.

As he remains behind bars, junta chief Min Aung Hlaing flew to Jakarta on Saturday for a special summit on Myammar called by the Association of South-east Asian Nations (ASEAN) involving leaders and foreign ministers.

The general’s invitation to the emergency meeting was controversial and triggered concerns it would help legitimise a regime that has acted with savagery in its attempt to put down a nationwide pro-democracy and civil disobedience movement.