Arlene Foster could face a DUP leadership challenge amid growing internal party unrest over her handling of Brexit.

Sky News reported that three quarters of the DUP’s Northern Ireland Assembly members had signed a letter calling for a leadership contest.

Meanwhile, the BBC also said DUP assembly members were being asked to sign a letter of no confidence in her leadership.

It came after the First Minister of Northern Ireland had earlier today dismissed suggestions that her leadership of the party was in peril.

She said that ‘these stories come up from time to time’ and she intended to ‘deal with it and move on’.

The DUP has now responded to the reports that a significant number of elected representatives have signed a letter of no confidence in Mrs Foster.

The party said its internal democratic electoral processes were a matter for its members and declined to make further public comment on Mrs Foster’s future. 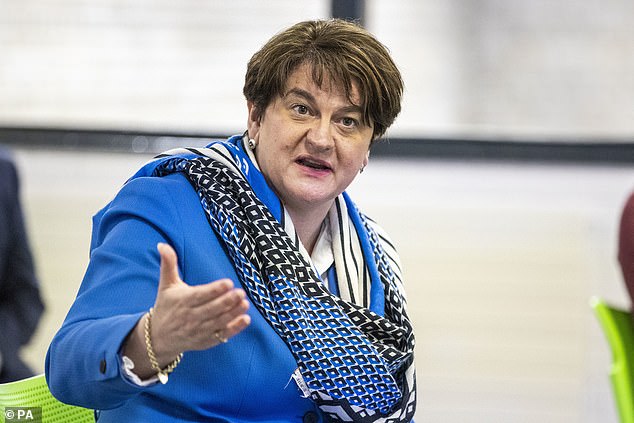 Arlene Foster could face a DUP leadership challenge amid growing internal party unrest over her handling of Brexit. Mrs Foster is pictured during a visit to a youth centre in Belfast today

‘The Democratic Unionist Party conducts its business in accordance with its constitution and rules,’ the party said in a statement.

‘The Officers of the Party oversee the conduct and organisation of its internal democratic electoral processes.

‘Whilst understanding that there will be from time-to-time public interest in party processes, these issues, in the first instance, are matters for members of the party and we are not able to make any further comment at this time.’

There has been growing discontent among DUP members about Mrs Foster’s leadership in recent months.

The primary source of their concern is her handling of the Brexit process.

The DUP is facing anger from the wider loyalist and unionist community over the rollout of the Northern Ireland Protocol which critics argue has created an economic and trade border in the Irish Sea between Northern Ireland and the rest of the UK.

Critics have accused Mrs Foster of failing to use the party’s influence in Westminster – particularly during its confidence and supply deal with the Conservatives – to secure a Brexit deal that saw Northern Ireland leave the EU on the same terms as the rest of the UK.

Poor polling numbers have exacerbated the discontent among the party faithful.

Responding to reports of internal party unrest, Mrs Foster said: ‘Stories on leadership come up from time to time, and it’s one of those times.

‘So we’ll just deal with it and move on because I’ve bigger things to do, including getting us through this Covid pandemic, including listening to the concerns of working-class communities.

‘These stories come up from time to time. This is no different.

‘I haven’t received any letters from constituency associations so I’m not going to get into a running commentary on these issues, they come up from time to time. I think it’s important to note that there is the big job of work to do. We have a year left of this mandate.

‘It’s important that we lift our eyes and continue the work of rolling out of the restrictions, deal with the Northern Ireland Protocol.’