Ruslan Kogan has had a rough trot in recent weeks. After a bumper pandemic, the online retail multimillionaire’s kogan.com miscalculated demand and overdid the spending spree, leaving it with full warehouses and forcing it to miss earnings forecasts. The share price slumped, reducing the value of his 15 per cent stake by more than $22 million to $138.9 million. 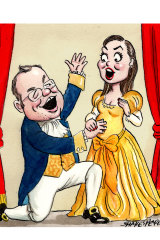 But the online retail giant and his wife, Anastasia Fai Kogan, have every reason to smile.

CBD can reveal the Melbourne couple are expecting their first child, an heir to the Kogan online retail empire.

The Russian-born pair immigrated with their families before meeting at Sydney’s Ivy rooftop pool bar on a spring evening in 2010. As recorded by the AFR, their opening encounter was less than romantic.

“I know with 100 per cent certainty you are Russian’,” Kogan recalls saying.

Fai Kogan was unimpressed. “I know with 100 per cent certainty you are an idiot,” she replied.

Fai Kogan became Melbourne Opera’s newest board member last July, mid-pandemic, when chair Michael Flemming realised the urgent need for the company to get their head around the internet thing.

Fai Kogan is certainly well-credentialled: she’s a Melbourne Business School MBA who runs a digital production agency (and also has a Bachelor of Music).

Suspicions were raised that Fai Kogan might have her own production in development after her fly in, fly out appearance at the opera’s recent premiere of Verdi’s Macbeth, as she failed to stay for the opening night afterparty.

She had hoped to keep the whole thing a secret but happy news travels fast.

On Tuesday night, Fai Kogan was showing visible signs of a baby bump when brought her husband on stage at Her Majesty’s Theatre for the Melbourne Opera’s Gathering of the Clans gala fundraiser. The event was hosted by Melbourne Opera patron-in-chief Lady Primrose Potter and Ian Dickson, president of the Friends of Melbourne Opera. Guests were seated on stage for a gala dinner, with “operatic selections presented by special guest artists” including operatic tenor-turned Brighton real estate auctioneer Stephen Smith and Herald Sun Aria winner Georgia Wilkinson.

Melbourne “It Girl” Lauren Thurin is even more of the moment than we realised. On Saturday, the nextgen member of the rich-listed Gandel family staged her engagement party on the broad sweeping lawns of Government House.

Thurin, a sustainability and investment adviser, is the daughter of Lisa and David Thurin and granddaughter of property developer and philanthropists John and Pauline Gandel. She is betrothed to Ollie Howard, an executive of a tech mentoring company, who is the son of Victorian Governor Linda Dessau and her husband, Anthony Howard, a former County Court judge.

We made much of how the bride-to-be stole the show with a white halter jumpsuit with black piping from the Chanel spring 2021 collection. And what do you know, days later, that very jumpsuit lands on the June 2021 edition of Vogue Australia, worn by Pryanka Chopra — as Vogue calls her, the “former beauty pageant queen, actor, author, tech investor, beauty entrepreneur and goodwill ambassador” — in a cover story story headlined “Pryanka Chopra reveals the secret behind her good hair and great marriage”. The Chanel jumpsuit retails for $7800.

The Liberal Party is at it again. And in news that will surprise absolutely no one, the target is the ABC. Remember the fuss back in 2018 when the federal council in Sydney voted to privatise the national broadcaster? The vote was non-binding but caused headaches for then prime minister Malcolm Turnbull when the backlash rather played into the hands of the party’s enemies, who promptly whipped up a fear campaign.

Now an agenda circulating ahead of the Liberal Party’s state council in Victoria next month proposes to convert the national broadcaster into an “opt-in subscription service” in metropolitan areas, while separating a regional ABC as a “standalone publicly funded broadcast” in the regions. That proposal came from Institute of Public Affairs communications director Evan Mulholland, an enduring critic of Aunty. “The ABC in its current form is a biased media organisation, it’s not even biased to Labor. It’s biased to the green left,” Mulholland writes. “If the ABC is as good as its staff claim it is, then it would thrive under an opt-in subscription model like Netflix and Stan.”

Best of luck with that one, Evan.