When Abdullah Ahmed fled Myanmar for Australia in 2007, democratic protests in South-east Asia’s poorest country had given way to a familiar pattern of military brutality and ethnic sectarianism.

The then 20-year-old landed at Menai High School in Sydney’s Sutherland Shire. His deputy principal, Robert Lindsay, recalls questioning the young man on whether he really wanted to go back to school. 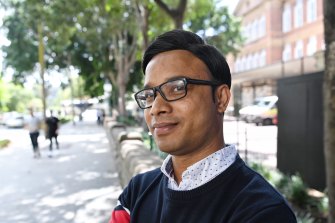 Sydney pharmacist Abdullah Ahmed has been waiting three years to get his fiancee out of Cox’s Bazar. Credit:Nick Moir

“His response was ‘sir, the Burmese military has stolen five years of my life, I’m going to take them back’,” says Lindsay.

In year 12, the other students at Menai High snuck into the school library at night. “The clock had ticked past midnight. There was Abdullah holding a torch over his books, studying,” says Lindsay.

By 2010 the Rohingya Muslim refugee was vice-captain of a school that had grown out of the shadow of the Cronulla race riots, two suburbs over.

“It was the best feeling ever,” says Ahmed. “It really gave me hope for my future in this new country, and I really felt that Australia is a country with equal opportunity.”

Things were starting to look promising for Myanmar too. After five decades of military rule it was on the brink of a transition towards democracy that would see Aung San Suu Kyi released from house arrest to win a stunning electoral landslide in 2015. There were hopes that the brutal treatment of the Rohingya minority at the hands of the junta would be moderated by the new Nobel laureate leader of a Buddhist country.

Now Ahmed is on the front line of Australia’s COVID-19 response, delivering medications to coronavirus patients as a pharmacist at Royal Prince Alfred Hospital in Sydney.

“I have done so many COVID tests I have ruined my nose and my throat,” he says.

“This is the way I’m repaying my gratitude to Australia and its people for giving me the opportunity to complete my dream of becoming a healthcare professional which I could not complete in Myanmar due to persecution against our Rohingya ethnicity.”

The Myanmar government and its military claim the Rohingya arrived as migrant workers in what was then British Burma, and deny them citizenship and statehood, despite evidence of their arrival in the 15th century. Over decades, religious fights have seen Buddhas removed, Muslim shops burnt and Rohingya militia attacks in retaliation. But those sectarian conflicts escalated sharply in 2017 when the Myanmar military began to evict an estimated 700,000 Rohingya out of Rakhine state in the country’s north, allegedly murdering and raping along the way. The United Nations has called the Rohingya “the most persecuted minority in the world”.

For the displaced, the great hope of Suu Kyi’s victory was squandered not long after her rise to power. Daw – or Aunty, as she is dubbed in Burmese – would not say the name of the ethnic group before defending the actions of the military in driving the stateless people out of her country.

That stance did little for Suu Kyi’s own long-term safety this week. The international democracy icon was put back under house arrest by the military on dubious claims of election fraud and importing banned walkie-talkies. After five years of quasi-democratic rule, the generals were still not satisfied with their level of power in a country they ruled for a half-century.

“It is only going to get worse for the Rohingya,” says Roger Lee Huang, a Myanmar political violence expert from Macquarie University.

“Suu Kyi, the National Democratic League and the public largely supported the actions of the military, but the military was in charge of the crimes against humanity.

“It now has free rein to continue to do what it says is necessary for national security.” 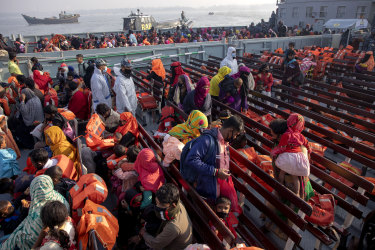 Unable to return to Myanmar for fear of persecution, these Rohingya refugees are on a Bangladesh navy vessel being moved from an overcrowded camp on the mainland to Bhasan Char island in late December.Credit:Getty Images

Stuck in Myanmar’s cycle of reprisal is Ahmed’s fiancee Omme. She asked only to be identified by her first name for safety reasons.

For three years she has been trying to get to Australia. Their wedding has been cancelled four times. She is trapped in Cox’s Bazar, near the Bangladesh-Myanmar border, along with hundreds of thousands of Rohingya who fled the 2017 violence. The world’s largest refugee camp has been plagued for years by overcrowding, poor sanitation, cholera, diphtheria and sexual assault.

In December, Bangladeshi authorities began relocating Rohingyas to the remote Bhasan Char island. By January there were 3500 living on the tsunami and flood-prone outpost, three hours from the nearest port. The island, which did not even exist until the Bay of Bengal’s waters receded in 2011, will eventually house 100,000 Rohingya in towering blocks, forbidden to leave without permission from Bangladesh’s government.

Omme has been told she is on the relocation list. She is terrified it will become her new home. 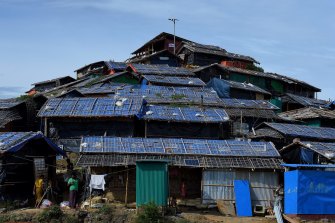 Shelters cover a hill in Jamtoli Camp in Cox’s Bazar, Bangladesh. Cox’s Bazar is home to more 700,000 Rohingya refugees who fled Myanmar during a military crackdown in August 2017. Credit:Kate Geraghty

“I am in constant fear of losing her,” says Ahmed. “She lives with perpetual fear and anxiety.”

Omme is a registered Rohingya refugee with UNHCR in Bangladesh, but Australia has suspended all humanitarian migration since March due to COVID-19. After spending two years in a queue for a prospective marriage visa before the coronavirus struck, she is now being blocked by travel restrictions triggered by the disease that Ahmed is helping Australia treat.

Ahmed spends his days at the hospital and his nights writing applications for Omme, an aspiring nurse, in the hope that one will get through the Department of Home Affairs.

“I teach her English through phone calls, WhatsApp and Viber messages,” he says.

The pair cannot get formally married because Myanmar and Bangladesh’s authorities will not recognise Omme’s nationality. The Australian government does not regard them as immediate family members because they are not married, despite Ahmed flying back multiple times to Bangladesh to see his wife-to-be. 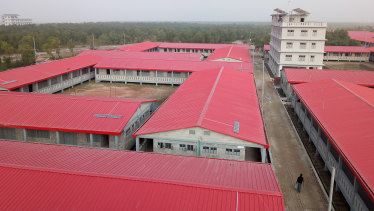 “Prospective Marriage (subclass 300) visa holders are not exempt from the government’s current travel ban because they are not permanent residents and have not yet been assessed as immediate family members of Australian citizens or permanent residents,” the Department of Home Affairs said in response to Ahmed’s claim.

Immigration Minister Alex Hawke was asked when the humanitarian or prospective marriage intake might restart, or whether special exemptions were possible for frontline COVID-19 workers. He did not respond.

“They should just be more compassionate about seeing each case on its own merit, not treating people like criminals,” says Lindsay.

Ahmed or Omme cannot return to Myanmar either. Ahmed’s father left for Australia in 1997 on a humanitarian visa after criticising the military regime that now rules the country by decree.

“When I talk to Omme over the phone, she keeps asking me with tears, ‘when will I see you again, when will we be together?’,” says Ahmed. “These questions really break my heart.”

The treatment of the Rohingya has not been the only disappointment of Suu Kyi’s brief reign.

After what was seen as a Mandela-like 15 years in detention, the weight of expectation created an almost impossible benchmark for change in the resource-rich but productivity-poor country.

“The Myanmar gold rush never happened. It did not perform the way it was expected to,” says Huang. “It did grow quickly but then of course Western investments never matched the expectation. The situation with the Rohingya clearly put investors off further.”

Aaron Connelly, a South-east Asian politics expert at the International Institute for Strategic Studies in Singapore, says the country remains beset by structural impediments, few of which were removed by Suu Kyi and her National League for Democracy (NLD).

“She has actually been very ineffective in managing the economy and the civil administration,” he says.

A robust opposition would have been able to capitalise on economic disenchantment, but the military’s political party, the Union Solidarity and Development Party, went backwards at the elections in November, winning just 33 seats. 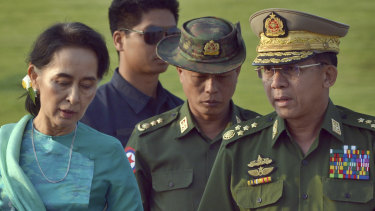 That left Suu Kyi’s NLD with 396 of 476 seats in the legislature, despite the military being guaranteed 25 per cent of seats as part of its negotiations to transition the country to democracy a decade ago.

The Tatmadaw, as the armed forces are known, for all of its military prowess, is an incompetent political force that has failed to win seats each time there has been a genuine election.

“The military thought they had a chance of winning the election,” says Connelly. “The result last year was embarrassing, it was humiliating.”

Retribution was swift. Once the election commission rejected the military’s unsubstantiated claims of voter fraud and negotiations broke down with the NLD, the Tatmadaw arrested Suu Kyi and 24 other MPs. Then it went after students and declared a year-long state of emergency, shut down the internet, blocked Facebook and turned off TV stations.

“They are arresting people who are not only NLD allies but also people who could lead protests against the crackdown,” says Connelly. “They are going after anybody who could take part in a protest movement.”

Suu Kyi was charged with illegally importing communications equipment on Wednesday. Six walkie-talkie radios were found in her house in the capital, Naypyidaw. She will be detained until at least February 15.

Charles Santiago, the chair of the Association of South-east Asian Nations Parliamentarians for Human Rights, said the charges were ridiculous.

“This is an absurd move by the junta to try to legitimise their illegal power grab,” he said.

If found guilty, the charges could have their desired effect of disqualifying Suu Kyi from office. MPs cannot have criminal convictions.

In a final irony, one of the last official foreign policy acts of Suu Kyi’s government was to lodge an objection to a Rohingya case in the International Court of Justice in December. The case accused the military of genocide.