After enveloping 600,000 visitors in giant projections of Vincent Van Gogh works, Melbourne’s immersive digital art gallery The Lume will bring to the city a new exhibition of pieces by Claude Monet and his impressionist friends.

The gallery will close its exhibition based on Van Gogh’s work in October and will open Monet & Friends Alive, showing digital projections of art from Monet, Cezanne, Renoir and Manet. 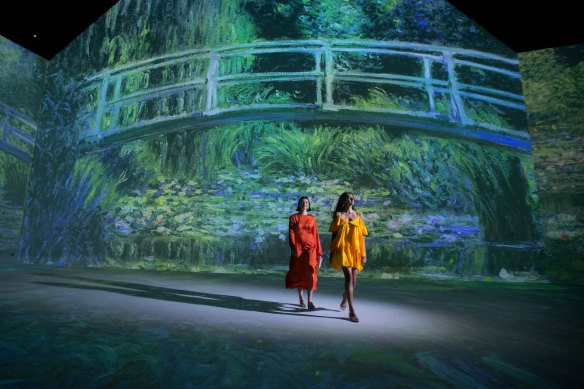 Tyra Stewart (left) and Dayashi Gamage at The Lume, where art from Monet and other impressionists will be showcased.Credit:Simon Schluter

Lume owner and founder Bruce Peterson said the exhibition would include a dozen French impressionist artists and more than 850 artworks.

“We felt that Monet & Friends Alive was going to be the perfect follow-up to give people a very different experience to Vincent [Van Gogh], but still a familiarity of all the great things that they found inspirational when they first came to The Lume,” he said.

Visitors can walk over a recreation of the bridge in one of Monet’s most famous paintings, Bridge Over A Pond of Water Lilies, explore a recreation of his studio and attempt to replicate the artist’s work themselves. 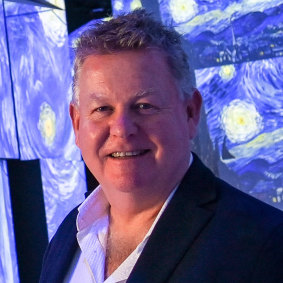 The immersive experience will be created using The Lume’s 143 high-definition projectors, displaying artworks across 3000 square metres of white carpet and up 11-metre walls of the Convention and Exhibition Centre at South Wharf.

When it closes, attendance for the Van Gogh exhibition is expected to top 700,000 visitors in a year, bringing an estimated $27 million in revenue through tickets priced at $39. Since opening last October, it has already drawn more than 600,000 people.

Peterson came up with the concept for The Lume when his children quickly became bored visiting art galleries in Italy and France. He said a typical visitor to the Van Gogh exhibition was someone who did not often go to galleries.

“For many [people] it’s been a bit of a sterile experience in a lot of galleries, especially because they find it a little bit intimidating, they don’t know what they’re looking at,” he said.

“We’ve hit on really looking at that visitor who doesn’t go to galleries all the time.”

He said organising an exhibition with some artists, such as Salvador Dali, required negotiation with their foundation or estate, but Monet and most of the impressionist artists were not under licence because of the time that had passed since they died.

The biggest issue for Peterson has been finding images that are of high enough resolution to be used in the exhibition.

“We’re projecting them four storeys high resolution, so the actual foundation assets that we start with, the artwork has to be high resolution and appropriate for what we do in the first place,” he said. “You can’t just pull it off the internet, for example.”

He said he was keen for The Lume to show more than just dead, white, male artists, and Monet & Friends Alive would include “featurettes” of three emerging digital artists alongside the impressionists.

“It’s a balance,” he said. “We’re showing great art and artists in a different way than a lot of people know and we are also highlighting these emerging digital artists.”