London: The days had a grim rhythm before I got sick. As coronavirus tightened its grip on Europe, Spain's latest death toll would come in mid-morning, France and the United Kingdom would follow mid-afternoon and Italy at 5pm. Thousands would be dead by the time I filed my story before dinner.

It's strangely easy to become desensitised to death on an industrial scale, and I fear that is happening to some degree in Australia as well as here in the UK. Distracted by Boris Johnson’s brush with mortality, Britain seems to have not fully come to grips with the scale of the unfolding disaster. More than 13,000 have now died, although the true figure is much higher because thousands of deaths in the community aren't included in the tally. The epidemic in the UK is tracking disturbingly close to Italy, whose plight once shocked the world. 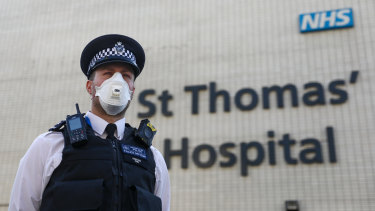 A police officer outside St Thomas’ Hospital, where Boris Johnson was being treated.Credit:Bloomberg

It was the right call: that night I improved and within two days it felt like the virus had given up and moved on. The fever has gone and my breathing has been improving. But I worry deeply about how many people also tried to do the right thing by avoiding emergency departments, only to leave it too late.

'That night I improved and within two days it felt like the virus had given up and moved on.'

Around the world, debate about the virus is shifting to how to return to some semblance of normality. It's an important discussion but one that must be carefully balanced with an understanding that people are still suffering from this disease, often alone. And that many who have been fortunate enough to avoid this virus so far will have a horrible ordeal, or even die, if the easing goes too far too soon.

Australia's own track record in suppressing the virus is remarkable. Prime Minister Scott Morrison and state premiers have done a good job in protecting the public from the sort of carnage Europe is experiencing daily. The risk of that success is that Australians become restless about the heavy economic costs of the strategy, and complacent about how easily COVID-19 spreads and how dangerous it can be.

Those grim daily death tolls have arrived for today: another 1438 deaths have been recorded in the past 24 hours in France, 761 in Britain, 578 in Italy and 523 in Spain. That's 3300 in a day in just four countries. Don't be complacent. You don't want to catch this.