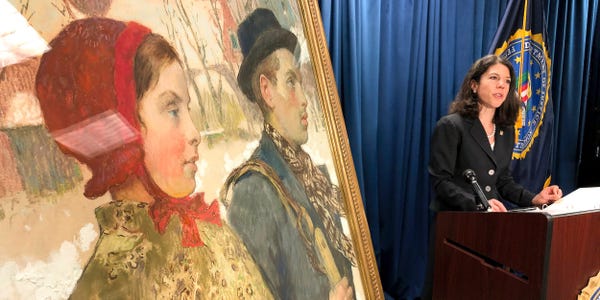 A painting stolen by Nazis from a Jewish family in 1933 was recently re-discovered and returned after 87 years.

"Winter," which was painted in the 19th century by American impressionist Gari Melchers and features two young people skating, was part of an extensive art collection looted by Nazis when the Mosse family — owners of the newspaper "Berliner Tageblatt" and harsh critics of Adolf Hitler's rise to power — were forced out of Berlin.

Heirs of the Mosse family have spent the last decade trying to recover lost pieces of their art collection. This week, "Winter" was returned to them after it was identified at a museum in upstate New York.

The FBI returned the painting to Mosse heirs on Thursday at a repatriation ceremony in Albany, New York.

"The Mosse family lost nearly everything because they were Jews. But they did not lose hope," acting U.S Attorney for the Northern District of New York Antoinette Bacon said at a press conference, according to CNN. "While this certainly does not take away the pain that the Mosses endured, I hope it provides the family with some measure of justice."

Publishing magnate Rudolf Mosse had first purchased the painting in 1900, and displayed it in his Berlin home, the Associated Press reported.

He died in 1920, and after his wife died in 1924, their art collection and publishing company were passed down to daughter Felicia Lachmann-Mosse who, with her husband, Hans Lachmann-Mosse, were critical of the Nazi Party in the Berliner Tageblatt.

After Nazis took the painting from the Mosse home in 1933, the artwork traveled from person to person before a businessman named Bartlett Arkell bought it from a New York gallery in 1934.

From 1934 to 2019, the painting was held at the Arkell Museum in Canajoharie, New York, which turned it over to the FBI after learning it had been taken illegally.

The Nazi regime stole thousands of pieces of art from Jewish families during the 1930s and 1940s, and Mosse heirs have been working to reclaim art belonging to their family since 2011.

Mosse Art Restitution Project president Roger Strauch told CNN that the painting is estimated to be worth hundreds of thousands of dollars and will be auctioned off by Sotheby's.

Strauch said the organization has eight other restitution claims pending in Poland, Sweden, Germany, Israel, and elsewhere in the United States.

"We can never ease the horrors of Nazi Germany from history, but we can, and should, take every opportunity to deliver any justice we can including the return of property to rightful heirs," Bacon said in a press release about the painting.  "The Department of Justice will continue to do just that."