Commuters are eschewing office work on Mondays, as new data shows that since the end of the second lockdown fewer people are travelling into the CBD on Monday mornings than on any other weekday.

City of Melbourne data shows an 11 per cent slump in the number of pedestrians passing through the Flinders Street underpass on Monday mornings compared with a typical post-lockdown weekday. 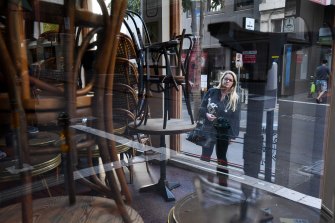 Belinda Coates says many of her favourite cafes are now shut on a Monday due to reduced clientele.Credit:Joe Armao

As workplace number caps were gradually lifted, Belinda Coates, a director at Melbourne CBD advisory firm Slattery, found she was more likely to work from home on Mondays, with meetings often set mid-week when most staff were in the office.

However, once she was able to come into her Bourke Street office every day, she was shocked to find the city quiet on the first day of the working week. She now makes sure she works in the city on Mondays.

Ms Coates said that many of her favourite cafes were now shut on Mondays due to low clientele.

Victorian workplaces can now bring back 100 per cent of their staff and public servants are required to work in the office at least three days a week.

However, many city office workers are still embracing flexible working and it appears Mondays are becoming the preferred day to work from home.

Since November last year, there have been 574 pedestrians on average detected walking through the Flinders Street underpass each Monday morning between 8am and 9am, making it the quietest weekday morning for foot traffic.

Thursdays are the busiest post-lockdown weekday morning outside Flinders Street Station, with 701 pedestrians detected on average between 8am and 9am. But irrespective of the day of the week, foot traffic is still well below 2019 levels when more than 3500 people would pass through each weekday morning.

Back in 2019, it was Friday, rather than Monday, that was the quietest day for weekday foot traffic at the underpass.

And while Monday foot traffic was lower than the weekday average in 2019, it was nowhere near as pronounced, with morning foot traffic just 2 per cent lower on average than the rest of the week.

Since the end of the second lockdown, Monday morning pedestrian numbers have been 11 per cent below those of a typical weekday.

Back in 2019, the area recorded its lowest average weekday morning peak pedestrian numbers on Fridays, but since the end of the second lockdown Monday mornings have recorded the lowest average foot traffic, with 256 people detected on average between 8am and 9am.

The same trend is observed throughout the morning, so the data does not show more people opting to travel into work earlier or later in the day. 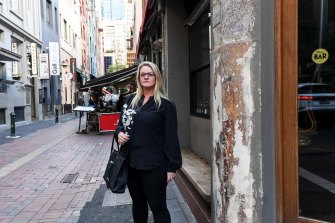 However, the drops in pedestrian traffic could reflect people avoiding public transport and instead opting to drive into the city post-lockdown.

Melbourne lord mayor Sally Capp said average pedestrian activity in the city was up by 12.4 per cent on the last day of March – a Wednesday – compared to the previous three weeks, but this was still down by 45 per cent compared to the pre-COVID average.

“The number of people coming into the city is increasing but we still have a long way to go and local businesses will continue to require support,” she said.

“We’re hopeful that in coming weeks we see more people coming into the city every weekday, as workers reconnect with their teammates and get the benefits of in-person collaboration.”

Cr Capp said the council was continually assessing data to deliver targeted events or programs to get people into the city when businesses most needed them.

“The city definitely has a swagger that wasn’t there a week or two ago,” he said.

“However, there is no doubt that hybrid working is here to stay for most city offices and that’s something that we need to embrace and respond to as a new economy.”

Mr Guerra said workers would hopefully see the benefit of a shorter commute or getting a tram seat on a Monday.

Ms Coates said Slattery had implemented a roster to encourage staff to come into the office on a mix of days, which they hoped in turn would help local businesses survive the pandemic.

“The businesses really need us,” she said.