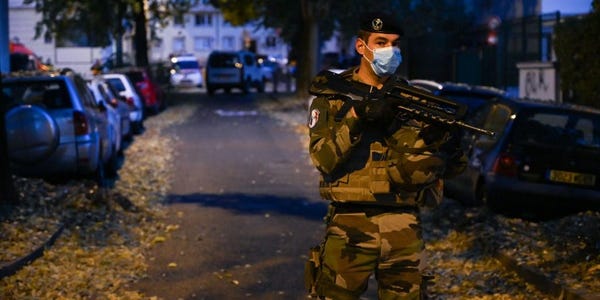 An assailant with a gun shot and wounded a Greek Orthodox priest at a church in Lyon, France, and fled the scene Saturday, according to the Guardian.

Police sources and witnesses told the outlet the attacker shot the priest twice as he had been closing the church down for the day. The priest remained on site while medics are treating him for life-threatening injuries, the Guardian reported.

Police closed off the crime scene to pedestrians and visitors.

The incident marks the latest of a string of attacks in France in recent weeks.

Three people were fatally stabbed at a church in Nice, France, on Thursday. Business Insider previously reported that European security officials said such attacks are not easily preventable because these individual are oftentimes working alone and leaving no communication in the process.

French President Emmanuel Macron labeled the event an "Islamist terrorist attack" and deployed soldiers to various public sites, including places of worship, to offer their protection. The French interior ministry is advising people to avoid the area, the Guardian reported.

The priest has not yet been identified, but various news outlets say he's Greek, the BBC reported.

"He is a Mediterranean-type man," an officer said on the radio in France, according to the Guardian. "It seems he was hiding a sawn-off shotgun under his coat. He fired it in the direction of the orthodox priest and fled."

The incident also comes two weeks on the heels of another attack. On October 16, a Paris teacher had been decapitated after sharing with his class images of the Prophet Muhammad. Police shot the attacker and brought him into the hospital alive.

Macron also characterized this incident as an "Islamist" attack, saying the teacher "was killed because Islamists want our future."

"Very clearly, it's France that has been attacked," Macron said.

This is a developing story. Check back for updates.